We describe the puff technique, by which pharmacological reagents can be administered during whole-cell patch-clamp recording, and highlight various aspects of the features that are crucial for its success.

Pharmacological administration is commonly used when conducting whole-cell patch-clamp recording in brain slices. One of the best methods of drug application during electrophysiological recording is the puff technique, which can be used to study the effect of pharmacological reagents on neuronal activities in brain slices. The greatest advantage of puff application is that the drug concentration around the recording site increases rapidly, thus preventing desensitization of membrane receptors. Successful use of puff application involves careful attention to the following elements: the concentration of the drug, the parameters of the puff micropipette, the distance between the tip of a puff micropipette and the neuron recorded, and the duration and pressure driving the puff (pounds per square inch, psi). This article describes a step-by-step procedure for recording whole-cell currents induced by puffing gamma-aminobutyric acid (GABA) onto a neuron of a prefrontal cortical slice. Notably, the same procedure can be applied with minor modifications to other brain areas such as the hippocampus and the striatum, and to different preparations, such as cell cultures.

The patch-clamp technique, a primary tool for investigating electrical signals in neurons, was developed in the 1970s1,2. A major advantage of this technique is that it provides knowledge on how specific treatments (e.g., pharmacological) may alter neuronal functions or channels in real time3. Pharmacological evaluation of neuronal function during whole-cell recording in a brain slice requires the application of drugs, such as agonists or antagonists of specific receptors, to the neurons being recorded. This method allows the identification of neuronal alterations that occur following application of a specific drug, thus leading to a better understanding of the physiological and pathological properties of the neurons4. Although pharmacological administration can be conducted via either perfusion5 or puff6, the latter is the superior technique. In particular: (i) puff application rapidly increases drug concentration around the recorded neuron to a level such that desensitization of the membrane receptors is prevented; (ii) the volume of drug puffed is extremely low, so that there is little effect on the bath solution, which therefore reduces any undesirable effects of the administered chemicals on brain slices; (iii) the puff protocol can be set and saved, making the experiment very precisely reproducible; (iv) puff application represents economical use of agonists/antagonists, particularly where such reagents are expensive or difficult to obtain.

Here, we will focus on recording whole-cell currents induced by puffing GABA in acutely prepared brain slices, a preparation that has the advantage of relatively well-preserved brain circuits. How we conduct puff-induced inhibitory currents7 will be described in this article. By using cesium (Cs+)-based internal solutions, and holding the neurons at 0 mV, we will introduce GABA-puff evoked inhibitory postsynaptic currents (eIPSCs) with appropriate technical details. Using a mouse model of depression induced by lipopolysaccharide (LPS) injection8, we show that the eIPSC amplitude evoked by a GABA puff is significantly reduced in slices of LPS-injected mice compared to vehicle controls. Our intention is that this article should show how the puff technique is widely applicable to studies aimed at evaluating the effect of any chemicals, compounds or drugs on neuronal activities in brain slices.

Animal housing and all animal experiments were conducted in accordance with procedures approved by the Ethics Committee for animal research at South China Normal University, according to the Guidelines for Animal Care established by the National Institute of Health.

The puff technique allows researchers to study the effect of drugs on particular receptors on the surface of a given neuron. In this article, we focus on currents mediated by GABA receptors. Figure 1 shows the puff and recording micropipettes. To eliminate any effect on recorded neurons of the physical pressure generated by the puff, ACSF and sucrose puffs (Figure 2A) are used as controls. The response induced by a GABA puff (black) can be blocked by a GABA-receptor inhibitor, such as picrotoxin as reported10, while the baseline condition can be recovered by ACSF wash-out (blue), as shown in Figure 2B. Notably, neither an ACSF nor a sucrose puff induces a response, suggesting that responses induced by GABA puffs are physiological and are mediated by GABA receptors located on the surface of the recorded cell. The dose and puff-duration response curves are shown in Figure 3.

LPS has been shown to alter neuronal activities and animal behavior, but its effect on GABA receptor-mediated responses was not well known. When we compare currents induced by GABA puffs in brain slices of LPS-injected and vehicle control mice, we observe significantly reduced IPSC amplitudes due to LPS treatment (Figure 4). 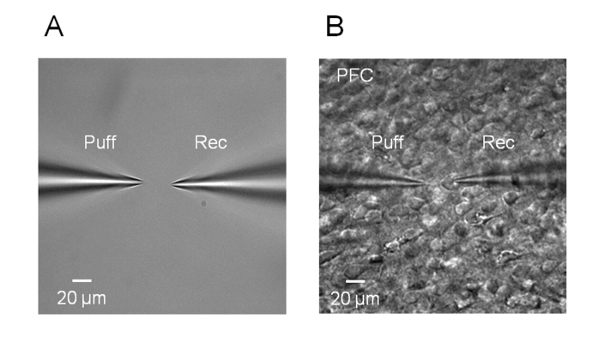 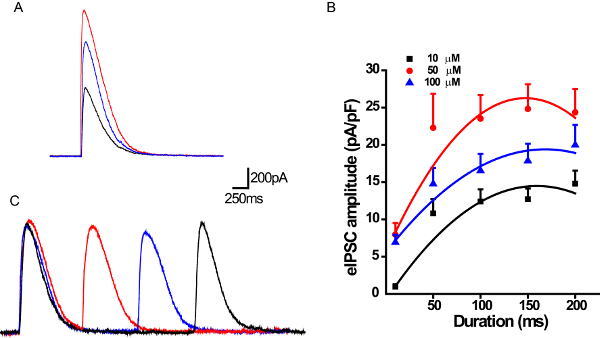 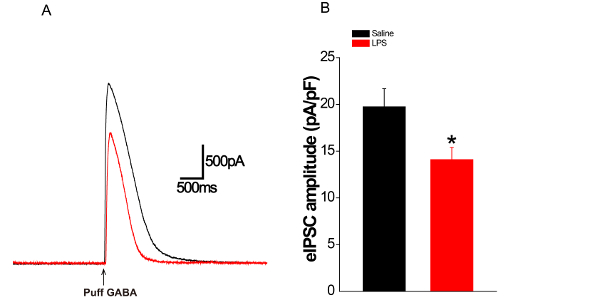 Puff application is widely used to evaluate postsynaptic receptor function3,4,7, but requires precise control in each experiment. We describe here a procedure involving whole-cell patch clamping, which demonstrates GABA-puff induced IPSCs (i.e., eIPSCs) in prefrontal cortical brain slices. The resistance of the recording electrode is about 5 MΩ, while the tip diameter of puff micropipettes is about 2-5 µm. Puff pressure is between 4-6 psi: this range is critical, as a higher pressure may cause neuronal damage, while a lower pressure can result in insufficient activation of the postsynaptic GABA receptors. The horizontal distance from the tip of the puff micropipette to the neuron recorded is about 20-40 µm (the diameter of 1-2 neurons), and the angle between the puff micropipette and slice surface is about 45°. The tip of the puff micropipette is vertically 20-40 µm above the slice (z-axis). The puff duration should be in the range 10-150 ms. Under the above circumstances, puffs of 10-50 µM GABA induce an appropriate neuronal response and the eIPSC amplitude and kinetic parameters obtained are reproducible. Although the protocol described here focuses on puff application to a slice patch, it is also suitable for recordings in neuronal cultures, as shown in our published work7.

We also show here eIPSCs resulting from paired-puff application of GABA. Paired-pulse protocols have been widely used to evaluate presynaptic properties7,11, but possible postsynaptic effects, such as changes in neurotransmitter-receptor binding rate and binding affinity, which could influence paired-pulse ratios, cannot be determined by presynaptic paired-pulse stimulation. The protocol described in this article provides a way to elucidate postsynaptic alterations in response to paired and even pulse-train stimuli. The reduction in eIPSC amplitude in the prefrontal cortex of LPS-injected mice suggests that altered levels or activity of GABA receptors might underlie LPS-induced behavioral changes.

Although, as with most drug delivery techniques, it is difficult to know the exact GABA concentration reaching the target cell, it is still possible to maintain the concentration of GABA at certain levels in the tissue by being consistent with the type of micropipettes used, and with parameters such as puff drive pressure and distance. In our case, the volume of solution puffed is about 1.1 µL at 100 ms duration. Thus, puffing allows quantitative studies to be performed7,12.

The preparation of healthy brain slices from the acute prefrontal cortex is critical for the puff recording procedure we describe, and the following points should be borne in mind. First, dissect the brain and separate the prefrontal cortex quickly (< 1 min) and then keep the brain block in ice-cold cutting solution for no more than 1 min. Next, tightly glue the brain block on top of the specimen holder of vibratome, or otherwise the brain block may float during sectioning. The speed and frequency of the vibratome should be set to generate even, healthy slices. Effort must be made to conduct all above procedures at 0-4 °C to minimize neuronal excitability.

It is worth noting that the cutting solution we describe in this article should be used for 1-2 month-old mice. For older mice (i.e. >3 months), the cutting solution should be replaced as described13. The puff technique is applicable to a range of patch-clamp experiments involving pharmacological treatments, and can also be used to test the effect of drugs on the electrical activity of any neurons.