DNA methylation is a stable and heritable epigenetic modification in the mammalian genome and is involved in regulating gene expression to control cellular functions. The reversal of DNA methylation, or DNA demethylation, is mediated by the ten-eleven translocation (TET) protein family of dioxygenases. Although it has been widely reported that aberrant DNA methylation and demethylation are associated with developmental defects and cancer, how these epigenetic changes directly contribute to the subsequent alteration in gene expression or disease progression remains unclear, largely owing to the lack of reliable tools to accurately add or remove DNA modifications in the genome at defined temporal and spatial resolution. To overcome this hurdle, we designed a split-TET2 enzyme to enable temporal control of 5-methylcytosine (5mC) oxidation and subsequent remodeling of epigenetic states in mammalian cells by simply adding chemicals. Here, we describe methods for introducing a chemical-inducible epigenome remodeling tool (CiDER), based on an engineered split-TET2 enzyme, into mammalian cells and quantifying the chemical inducible production of 5-hydroxymethylcytosine (5hmC) with immunostaining, flow cytometry or a dot-blot assay. This chemical-inducible epigenome remodeling tool will find broad use in interrogating cellular systems without altering the genetic code, as well as in probing the epigenotype−phenotype relations in various biological systems.

DNA methylation, mostly refers to the addition of a methyl group to the carbon 5 position of cytosine to form 5-methylcytosine (5mC), is catalyzed by DNA methyl-transferases (DNMTs). 5mC acts as a major epigenetic mark in the mammalian genome that often signals for transcriptional repression, X-chromosome inactivation and transposon silencing1. The reversal of DNA methylation is mediated by the Ten-elven translocation (TET) protein family. TET enzymes belong to the iron (II) and 2-oxoglutarate dependent dioxygenases which catalyze the successive oxidation of 5mC to 5-hydroxymethylcytosine (5hmC), 5-formylcytosine (5fC) and 5-carboxycytosine (5caC). TET-mediated 5mC oxidation imposes an additional layer of epigenetic control over the mammalian genome. The discovery of TET has sparked intense interest in the epigenetic field to unveil the biological functions of TET proteins and their major catalytic product 5hmC. 5hmC is not only an intermediate during TET-mediated active DNA demethylation2,3,4, but also acts as a stable epigenetic mark5,6,7,8. Although DNA hydroxymethylation is highly correlated with gene expression and aberrant changes in DNA hydroxymethylation are associated with some human disorders9,10,11, the causal relations between epigenetic modifications on DNA and the phenotypes often remain challenging to be established, which can be partially ascribed to the lack of reliable tool to accurately add or remove DNA modifications in the genome at defined temporal and spatial resolution.

Here we report the use of a chemical-inducible epigenome remodeling tool (CiDER) to overcome the hurdle facing studies of causal relationships between DNA hydroxymethylation and gene transcription. The design is based on the assumption that the catalytic domain of TET2 (TET2CD) can be split into two inactive fragments when expressed in mammalian cells and its enzymatic function can be restored by taking a chemically inducible dimerization approach (Figure 1A). To establish a split-TET2CD system, we selected six sites in TET2CD, composed of a Cys-rich region and a double-stranded β-helix (DSBH) fold, on the basis of a reported crystal structure of TET2-DNA complex that lacks a low complexity region12. A synthetic gene encoding rapamycin-inducible dimerization module FK506 binding protein 12 (FKBP12) and FKBP rapamycin binding domain (FRB) of the mammalian target of rapamycin14,15, along with a self-cleaving peptide T2A polypeptide sequence16,17, was individually inserted into the selected split sites within TET2CD. The selection of TET2 as our engineering target is based on the following considerations. First, somatic mutations in TET2 with concomitant reduction in DNA hydroxymethylation are frequently observed in human disorders including myeloid disorders and cancer10, which provides useful information on sensitive sites to be avoided for insertion. Second, a large fraction of the TET2 catalytic domain, particularly the low complexity region, is dispensable for the enzymatic function12, thus enabling us to craft a minimized split-TET2 for inducible epigenetic modifications. After screening over 15 constructs, a construct that exhibited highest rapamycin-inducible restoration of its enzymatic activity in the mammalian system was chosen and designated as CiDER18. We describe herein the use of mCherry-tagged CiDER to achieve inducible DNA hydroxymethylation and epigenetic remodeling with rapamycin, and present three methods for validating CiDER-mediated 5hmC production in a model cellular system HEK293T.

Chemical inducible 5mC-to-5hmC conversion can be validated by immunostaining at single-cell level, flow cytometry analysis on transfected (mCherry-positive) cell populations, or a more quantitative dot-blot assay as illustrated in Figure 1. The catalytic domain of TET2, or TET2CD, were used throughout the study as a positive control. See references 18-20 for further details regarding the genome-wide mapping of rapamycin-induced changes in 5hmC and chromatin accessibility. 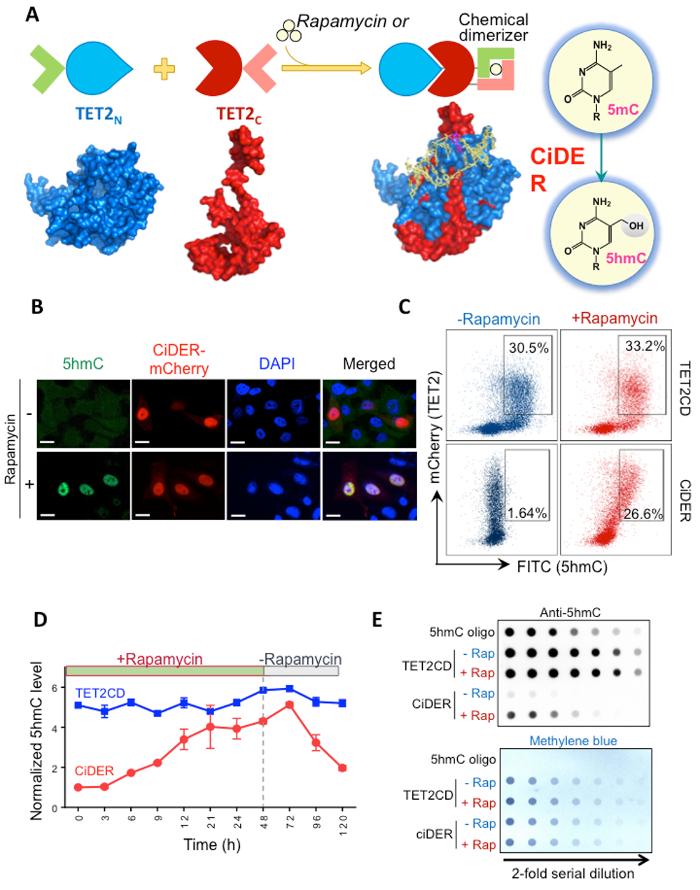 Here we have illustrated the use of an engineered split-TET2 enzyme to achieve temporal control of DNA hydroxymethylation. Following the discovery of TET family of 5-methycytosine dioxygenase, many studies have been performed to decipher the biological functions of TET proteins and their major catalytic product 5hmC1,2,3,4,5,6,7,8,9,10,11. However, temporal and precise control over DNA modifications in the genome continues to be a demanding challenge for the field. Our CiDER system is one of the few systems utilizing an engineered DNA modifying enzyme to fill this technical gap. The protocol described herein is mostly tailored for model cellular systems, such as the human embryonic kidney (HEK) 293T and the HeLa cell lines. Rapamycin concentrations and treatment time may need to be adjusted to achieve optimal performance in different cell types. To find out the best 5hmC induction time point, a time course experiment, as we described in section 1.3.3, is strongly recommended. Immunofluorescence staining of 5hmC in transfected cells can be used as the most convenient readout. For a more quantitative analysis, a dot-blot assay is recommended but it may take more laborious procedures. For dot-blot assays, the amounts of input DNA must be optimized for different cell types. A careful titration experiment using 2-fold serial dilution with varying DNA loading amounts is strongly recommended.

The CiDER system can be broadly used to dissect the correlation between DNA hydroxymethylation and phenotypic changes in different biological systems. Listed below are exemplary downstream applications or questions that can be addressed with the CiDER system.

How will TET-mediated 5mC oxidation alter the DNA methylation landscape in various model cellular system? This can now be easily addressed by comparing the DNA methylome and hydroxymethylome before and after rapamycin treatment. How will DNA hydroxymethylation alter chromatin accessibility and histone modifications? A comparison of ATAC-seq and ChIP-Seq results in the same cell before and after administration of rapamycin will tell the answer. Since TET proteins play a suppressive role in certain types of cancer, it will be interesting to test how chemical inducible restoration of TET protein and 5hmC production will impinge on tumor growth. Given the role of TET/5hmC in stem cell differentiation, it remains to be determined how temporally controlled 5hmC production at a defined transitionary stage will impact on lineage specification of stem cells during development.

In its current configuration, the CiDER system can only be used to globally induce 5mc-to-5hmC conversion. Ideally, CiDER can be fused with a catalytically-inactive Cas9 or its orthologues, which will enable loci-specific targeting and inducible DNA methylation editing in the genome. Such precise chemical-inducible epigenome remodeling tool can be widely applied to unambiguously probe the epigenotype-phenotype relations in mammals without altering the genetic code.