Drosophila is a widely used experimental model suitable for screening drugs with potential applications for cancer therapy. Here, we describe the use of Drosophila variegated eye color phenotypes as a method for screening small-molecule compounds that promote heterochromatin formation.

Drosophila is an excellent model organism that can be used to screen compounds that might be useful for cancer therapy. The method described here is a cost-effective in vivo method to identify heterochromatin-promoting compounds by using Drosophila. The Drosophila's DX1 strain, having a variegated eye color phenotype that reflects the extents of heterochromatin formation, thereby providing a tool for a heterochromatin-promoting drug screen. In this screening method, eye variegation is quantified based on the surface area of red pigmentation occupying parts of the eye and is scored on a scale from 1 to 5. The screening method is straightforward and sensitive and allows for testing compounds in vivo. Drug screening using this method provides a fast and inexpensive way for identifying heterochromatin-promoting drugs that could have beneficial effects in cancer therapeutics. Identifying compounds that promote the formation of heterochromatin could also lead to the discovery of epigenetic mechanisms of cancer development.

Heterochromatin is a condensed form of DNA that plays a central role in gene expression, in regulating chromosome segregation during cell division, and in protecting against genome instability1. Heterochromatin has been considered to be a gene repression regulator and to protect chromosome integrity during cell mitosis2,3. It is associated with the di- and tri-methylation of histone H3 lysine 9 (H3K9me) during lineage commitment4,5. Moreover, recruitment of Heterochromatin Protein 1 (HP1) chromodomain proteins is also considered to be associated with heterochromatin and epigenetic repression of gene expression6. These proteins are essential components and markers of heterochromatin formation.

Therefore, we take advantage of this Drosophila transgene system that produces a variegated eye color phenotype since its expression is directly correlated to the amount of heterochromatin present. Upon discovery of compounds that are suspected to promote heterochromatin formation, we may confirm this suspicion using other methods such as western blot. These heterochromatin-promoting substances may be further developed for clinical trials in patients in the future. 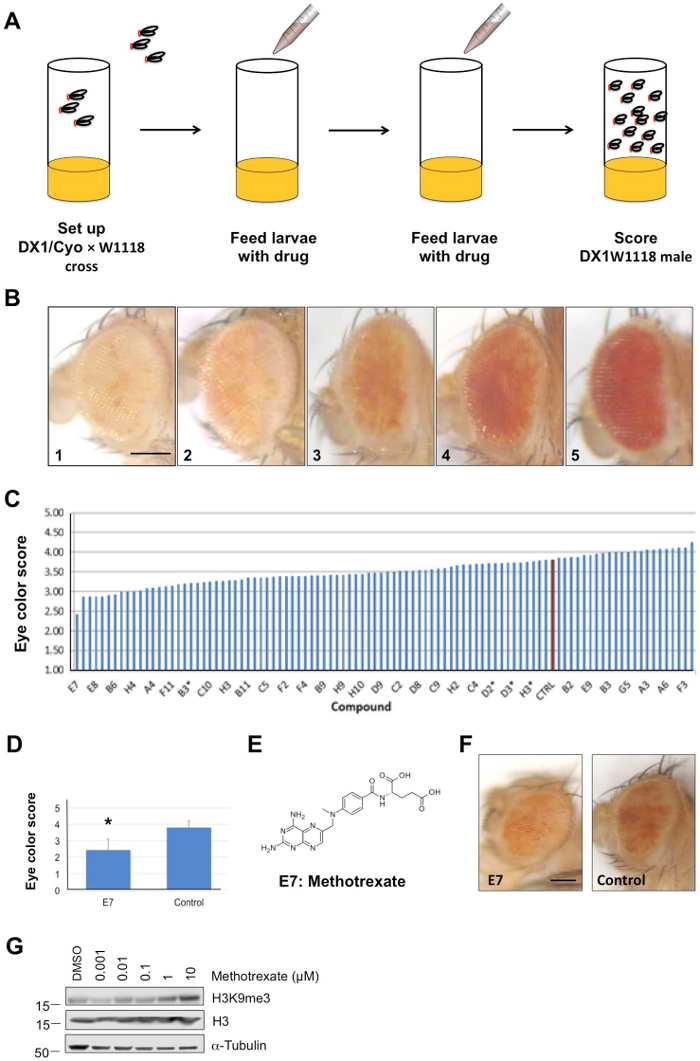 Figure 1: An illustration of the drug screening in Drosophila. (A) Drosophila screen methodology. An overview of scheme for heterochromatin-promoting compounds screening by using the Drosophila model. Three w1118/Y;DX1/CyO males and three virgin w1118 are crossed at room temperature. Then, remove the adult flies at day four and add 60 µL of the 10 µM drug dissolved in 33% DMSO solution to the top of the fly food at day four and day six, respectively. 33% DMSO solution was used as a control. The eye color (white to red) ratio of the F1 male generation were observed. (B) Eye color phenotype analysis and score. Representative images of eye color showing variegated phenotype. The percentage of variegation eye color was rated as following: 1, 1-5% red spots in total surface area; 2, 6-25% red spots in total surface area; 3, 26-50% red spots in total surface area; 4, 51-75% red spots in total surface area; and 5, >75% red spots in total surface area. (Scale Bar = 200 μm) (C) Each drug was assayed as the mean values from three independent experiments ± s.d. (standard deviation). Red bar shows the control. (D) Results of the scale performed in drug E7 and control. Differences between E7 and control groups were considered significant if P-values were <0.05 (*) by Student's t-Test. (E) The molecular structure of a chemical compound which termed E7 used in the example drug library. (F) Representative images of the fly eyes in E7 and control treatment group. (Scale Bar, 200 μm) (G) The western blot was performed with antibodies specific for H3K9me3, H3, or α-Tubulin by using the 3rd instar larvae total protein without or with methotrexate treatment at the indicated concentrations. This figure has been modified from Loyola et al14. Please click here to view a larger version of this figure.

Heterochromatin is a condensed form of DNA that plays a central role in regulating gene expression. It is becoming increasingly more recognized in cancer and may serve as a potential target for cancer therapy15,16,17,18. Small-molecule compounds are commonly used in drug development due to advantages in manufacture, preservation, and metabolism in human bodies. To identify heterochromatin-promoting small-molecule compounds, an efficient method was designed and presented by using the DX1Drosophila strain, which has been proven to affect flies' eye color in a heterochromatin-dependent manner (Figure 1).

Our screening protocol is a simple, inexpensive and easy-to-follow in vivo system for drug development. However, one limitation of the screening strategy is determining an effective drug concentration. The female fruit fly lays her eggs on the surface of the semisolid fly food. For the drug treatment, we pipet the drug solution to the surface of the food, which is supposed to contain a predetermined concentration. However, since different drugs could have different efficiencies in diffusing to the bottom of the food, the drug concentration is not guaranteed to be consistent below the surface or towards the bottom of the food. At 10 µM concentration, lethality was seldom observed in larvae treated with any of the drugs in the library we screened. However, most of the drugs caused severe lethality to the larvae at 100 µM concentration, suggesting that drug concentration could also be considered as an important factor for the screen.

Here, we notice that tandem repeats such as those used here can trigger PEV by a mechanism that differs in some regards from that seen in pericentric heterochromatin. A drug that impacts PEV during embryonic and larval development (the test described here) will only identify drugs that impact the maintenance of heterochromatin in somatic cells and will not identify drugs that impact the initial formation of heterochromatin, which most likely occurs during blastoderm (nuclear cycles 10-14). Nonetheless, this could be a useful assay for a quick starting screen.

This protocol is reliable and cost-effective due to the sensitivity of this transgene cluster (DX1) to heterochromatin formation, reflected by the amount of red pigmentation present in the eye. Additionally, the short lifespan of Drosophila makes this protocol more efficient than other model organisms such as zebrafish or human cells. While there likely might be a reporter gene system present in zebrafish that is just as sensitive to heterochromatin levels, their lifespan is much longer than Drosophila and would take longer to obtain results. Additionally, using human cells would not be possible since this protocol specifically focuses on using phenotypic changes from epigenetic regulation to determine heterochromatin levels. Thus, this protocol provides an efficient in vivo method to determine which small drug molecule could potentially serve as a candidate for suppressing oncogenes in cancer therapeutics. While the Drosophila drug screening method is a slow approach to identifying compounds when compared with some in vitro screening methods, it is relatively sensitive and allows us to test compounds in vivo. In combination with the cell screening method, which is relatively inexpensive, easy to perform and is high throughput, the Drosophila screening method could also be used to confirm hits as a supplementary method.

In summary, with an interest in identifying compounds for further research and targeting heterochromatin for cancer therapy, although the mechanism in which this is occurring is not yet fully understood, a simple screen was performed in order to identify heterochromatin-promoting drugs. Discovering a low concentration at which a drug can promote heterochromatin formation could offer more unique treatments that may result in fewer side effects compared to modern chemotherapy treatments.