Polynucleotide kinases (PNKs) are enzymes that catalyze the phosphorylation of the 5' hydroxyl end of DNA and RNA oligonucleotides. The activity of PNKs can be quantified using direct or indirect approaches. Presented here is a direct, in vitro approach to measure PNK activity that relies on a fluorescently-labeled oligonucleotide substrate and polyacrylamide gel electrophoresis. This approach provides resolution of the phosphorylated products while avoiding the use of radiolabeled substrates. The protocol details how to set up the phosphorylation reaction, prepare and run large polyacrylamide gels, and quantify the reaction products. The most technically challenging part of this assay is pouring and running the large polyacrylamide gels; thus, important details to overcome common difficulties are provided. This protocol was optimized for Grc3, a PNK that assembles into an obligate pre-ribosomal RNA processing complex with its binding partner, the Las1 nuclease. However, this protocol can be adapted to measure the activity of other PNK enzymes. Moreover, this assay can also be modified to determine the effects of different components of the reaction, such as the nucleoside triphosphate, metal ions, and oligonucleotides.

Polynucleotide kinases (PNK) play critical roles in many DNA and RNA processing pathways, such as DNA repair and ribosome assembly1,2,3,4,5. These fundamental enzymes catalyze the transfer of the terminal (gamma) monophosphate from a nucleoside triphosphate (NTP, most often ATP) to the 5' hydroxyl end of a nucleotide substrate. One of the most well characterized PNKs is bacteriophage T4 PNK, which has broad substrate specificity and is heavily utilized by molecular biology labs for incorporating radioactive isotope labels onto the 5 terminus of a DNA or RNA substrate6,7,8,9,10,11,12. Another example of a PNK enzyme is CLP1, which is found in Eukarya, Eubacteria, and Archaea, and is implicated in several RNA processing pathways4,13,14,15.

Historically, most assays that measure polynucleotide kinase activity are dependent upon radioactive isotope labeling and subsequent autoradiography5,16. In recent years a number of additional assays have been developed to measure PNK activity, including single molecule approaches, microchip electrophoresis, molecular beacons, as well as colorimetric and luminescence-based assays17,18,19,20,21,22. While many of these new approaches provide enhanced detection limits and avoid the use of radioactivity, each has drawbacks, such as cost, reliance on immobilized resin, and limitations in substrate choice.

Grc3 is a polynucleotide kinase that plays a pivotal role in the processing of pre-ribosomal RNA2,3,23. Grc3 forms an obligate complex with the endoribonuclease Las1, which cleaves the Internal Transcribed Spacer 2 (ITS2) of the pre-ribosomal RNA3. Cleavage of the ITS2 by Las1 generates a product harboring a 5' hydroxyl that is subsequently phosphorylated by the Grc3 kinase3. To investigate the nucleotide and substrate specificity of Grc3, an inexpensive assay that allowed testing of different oligonucleotide substrates was required. Therefore, a PNK phosphorylation assay using fluorescently-labeled substrates was developed. This assay was successfully used to determine that Grc3 can utilize any NTP for phosphoryl transfer activity, but favors ATP24. This protocol adapts the original assay to measure PNK activity of Grc3 on an RNA mimic of its pre-ribosomal RNA substrate (SC-ITS2, Table 1). One challenging aspect of this fluorescence-based approach is the reliance on large polyacrylamide gels to effectively resolve phosphorylated and nonphosphorylated substrates. The protocol provides specific details on how to pour these large gels and avoid common pitfalls when doing so.

Working with RNA requires particular care because it is strongly susceptible to degradation. There are simple preventative steps one can take to limit ribonuclease contamination. A separate RNA workstation that can be easily treated with an RNase inhibitor-containing cleaning agent is often helpful. Always wearing gloves when handling samples and use of RNase-free certified consumables is necessary. Because water is another common source of contamination, it is best to use freshly purified water and sterilize all solutions using a 0.22 μm filter.

NOTE: This assay can be used to measure several variables such as time, nucleotide levels, or enzyme concentration. The goal of this experiment is to assess the amount of phosphorylated RNA in the presence of constant Las1-Grc3 complex and varying ATP levels. 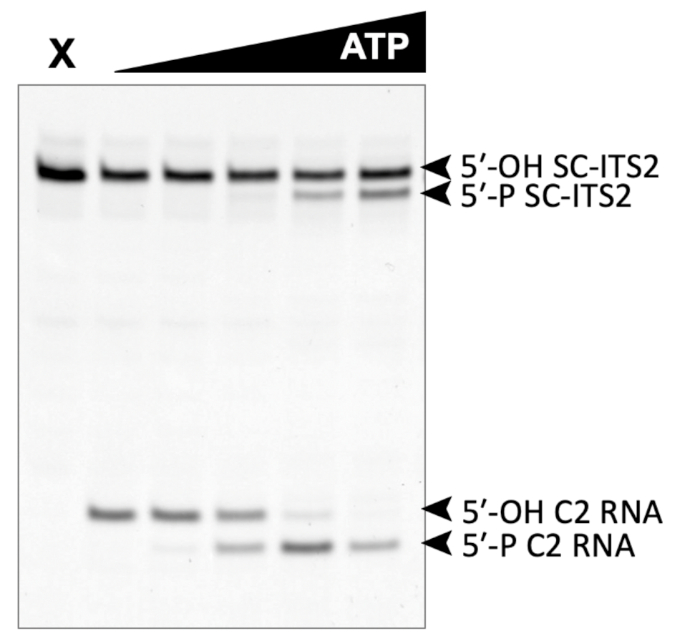 Figure 1: Example of denaturing gel analysis of phosphorylated RNA. In vitro RNA kinase assay of Las1-Grc3 (110 nM) incubated with 500 nM SC-ITS2 RNA. X marks the control reaction without Las1-Grc3 and the black triangle represents the titration of ATP from 0-10 mM. C2 RNA is the result of SC-ITS2 RNA cleavage by the Las1 nuclease and is the endogenous substrate for Grc3 PNK activity. Please click here to view a larger version of this figure. 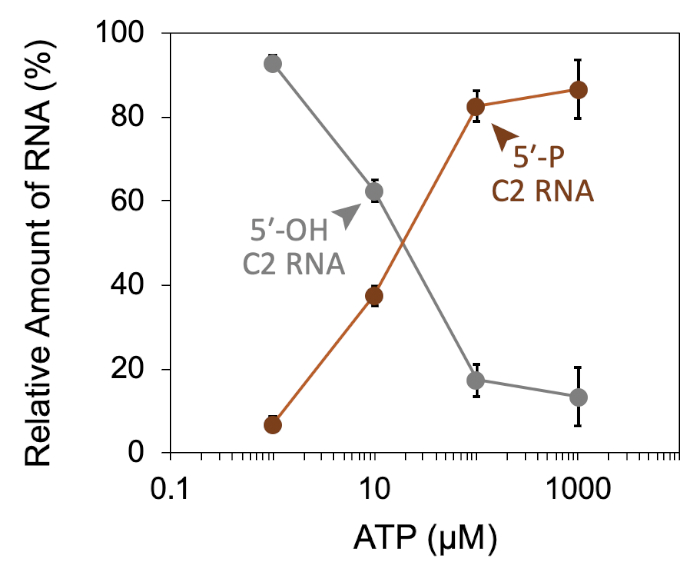 Described is an assay to measure kinase activity of Grc3 PNK on fluorescently-labeled nucleotide substrates. This protocol can be applied to characterize other PNK enzymes by adapting the Reaction Buffer and oligonucleotide substrate. For instance, the protocol calls for a trace amount of EDTA. The addition of EDTA is beneficial for two reasons: First, this approach favors magnesium-bound Grc3 by preventing the enzyme from binding to trace amounts of contaminating metals in the mixture. Second, a small amount of EDTA inhibits the activity of contaminating metal-dependent ribonucleases without disrupting the activity of the associated Las1 metal-independent ribonuclease. The concentration of EDTA may be altered depending on the source of the specific PNK. This assay also provides an advantage over traditional PNK phosphorylation assays that rely on oligonucleotides labeled with short half-life radioisotopes (i.e., 2 week half-life for phosphorus-32). This protocol can be adapted to measure specific enzyme activity and Michaelis-Menten kinetics as well as determine the dependence of phosphorylation on various parameters, such as the nature of the nucleotides, substrates, and metal ions.

This protocol relies on running large denaturing polyacrylamide gels in order to achieve sufficient resolution to distinguish an unphosphorylated substrate from its phosphorylated product. Pouring and handling these gels are critical steps in the protocol. For instance, the acrylamide solution must be heated to dissolve the urea and then cooled slowly before pouring the gel. Cooling this solution too quickly can lead to the formation of crystals. Care must also be taken to avoid introducing air bubbles and dust while pouring and setting the gel. Imaging the gel without removing the glass plates is recommended to avoid ripping the gel, which is thin and difficult to handle once removed from the glass plates.

This protocol can be adapted to measure the phosphorylation of different sized oligonucleotide substrates. This particular assay used a 15% acrylamide gel to achieve resolution of phosphorylation of 27 nt (SC-ITS2 RNA) and 18 nt (C2 RNA) substrates. The addition of one phosphate group to the 5-end of SC-ITS2 RNA produces a modest shift compared to the mobility change induced upon 5-phosphorylation of the shorter C2 RNA (Figure 1). This highlights a limitation in RNA length when using this technique. With longer RNA substrates, the contribution of a phosphate group to the overall molecular weight of the RNA species is diminished. For this reason, the percentage of acrylamide as well as the gel running time can be optimized to achieve resolution of different sized substrates29. In general, higher percentages of acrylamide are used for smaller oligonucleotide substrates while lower percentages of acrylamide (down to 8%) provide better resolution of larger oligonucleotide substrates.

The major limitation of this assay is that it is low-throughput. Pouring and running denaturing gels takes a significant amount of time, limiting the number of gels and samples that can be analyzed in a day. A future application to overcome this limitation could be the development of microfluidic chips able to resolve phosphorylated oligonucleotide products. Microfluidic-based gel electrophoresis has many advantages over traditional gel electrophoresis, such as smaller sample size, automation, and speed. However, current microfluidic chips do not have single nucleotide resolution. In conclusion, the use of denaturing gel electrophoresis to detect altered migration of nonradioactive oligonucleotides provides a useful technique to monitor the catalytic requirements and substrate preference of polynucleotide kinase enzymes.