The stomatogastric nervous system (STNS) of the Jonah crab (C. borealis) can be used for electrophysiology, immunohistochemistry, and cell culture studies. The STNS extraction is done in two parts: the gross and fine dissection.

The stomatogastric ganglion (STG) is an excellent model for studying cellular and network interactions because it contains a relatively small number of cells (approximately 25 in C. borealis) which are well characterized. The cells in the STG exhibit a broad range of outputs and are responsible for the motor actions of the stomach. The stomach contains the gastric mill which breaks down food with three internal teeth, and the pylorus which filters the food before it reaches the midgut. The STG produces two rhythmic outputs to control the gastric mill and pylorus known as central pattern generators (CPGs). Each cell in the STG can participate in one or both of these rhythms. These CPGs allow for the study of neuromodulation, homeostasis, cellular and network variability, network development, and network recovery.

The dissection of the stomatogastric nervous system (STNS) from the Jonah crab (Cancer borealis) is done in two parts; the gross and fine dissection. In the gross dissection the entire stomach is dissected from the crab. During the fine dissection the STNS is extracted from the stomach using a dissection microscope and micro-dissection tools (see figure 1). The STNS includes the STG, the oesophageal ganglion (OG), and the commissural ganglia (CoG) as well as the nerves that innervate the stomach muscles. Here, we show how to perform a complete dissection of the STNS in preparation for an electrophysiology experiment where the cells in the STG would be recorded from intracellularly and the peripheral nerves would be used for extracellular recordings. The proper technique for finding the desired nerves is shown as well as our technique of desheathing the ganglion to reveal the somata and neuropil. 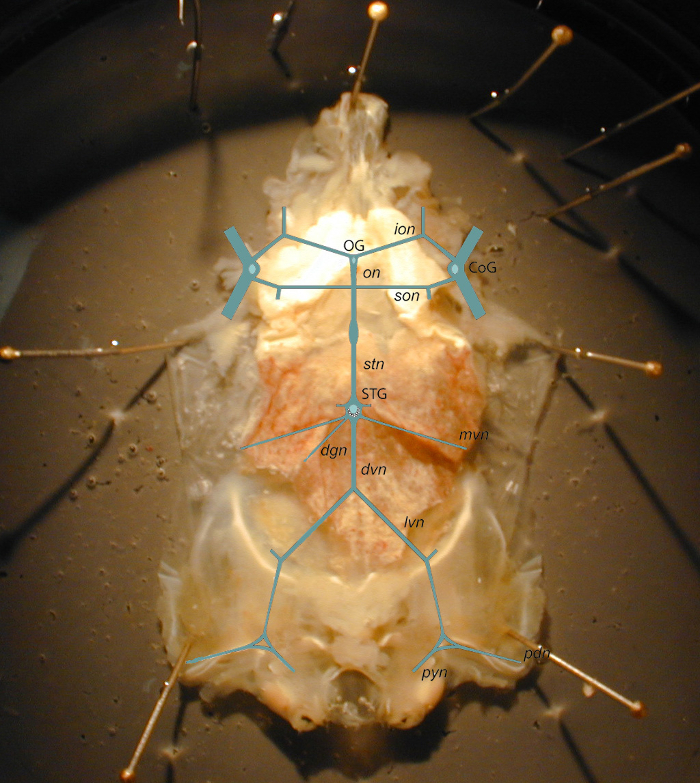 Figure 1: Diagram illustrating the approximate placement of the STNS in the stomach prior to dissection. 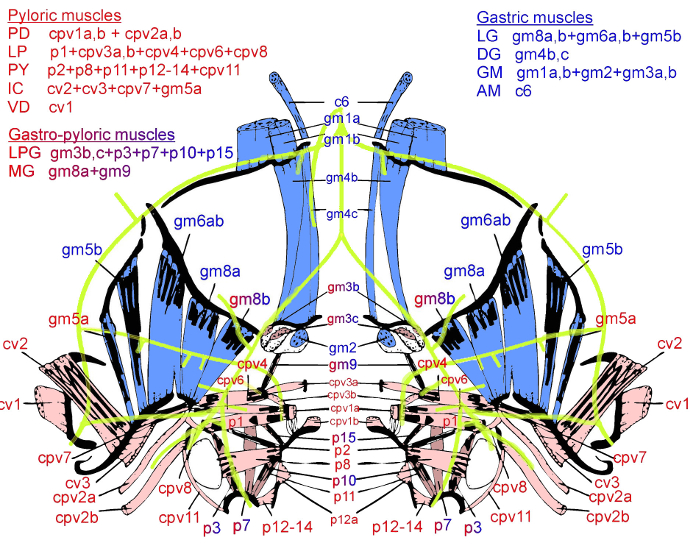 Figure 2: Diagram of the various muscles in the lower part of the stomach and an overlay of the STNS in light green. Each cell type in the STG is listed with the muscles they are known to innervate. This map is helpful when planning to dissect a nerve which carries a signal from a given cell (courtesy of the Nadim lab). 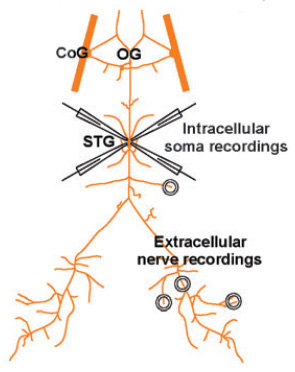 Figure 3: Schematic diagram of the STNS with intracellular electrodes and extracellular wells (from Marder and Bucher, 2007).

The STNS dissection is the first step in performing an electrophysiology or immunohistochemistry experiment, or for obtaining cells for cell culture. Regardless of the intended experiment, the gross dissection will remain unchanged. However, the fine dissection may vary. It is important to plan ahead of time which cells and which nerves you will record from. Most neurons in the STG have processes that innervate at least one muscle in the stomach (see figure 2) and are classified according to their innervated target. Therefore, extracellular recordings are required to fully verify the identity of a cell that is being recorded intracellularly. The pyloric rhythm’s frequency and robustness are used to monitor the health of the preparation. Therefore, many experiments include extracellular recordings from the lvn. The dgn is commonly used to monitor the gastric rhythm. The stn is often crucial to most experiments because there are many modulatory cells in the anterior end of the STNS and severing that nerve can cause the pyloric and gastric rhythms to cease or become irregular.

Even though the order in which the steps in the fine dissection are done is not important, we find it easier to remove the STNS without damage by keeping the ends of the peripheral nerves anchored to the muscle until after the STG has been disconnected from the surrounding tissue. This keeps the STG and stn taut enough to safely and easily remove the muscles and tissue surrounding them.

Once the preparation is in the clear Sylgard dish, any tissue that remains on the STNS should be removed to avoid its interference with the electrodes during an experiment. It is also easier to get good, stable recordings when the preparation is pinned down as taut as possible without causing damage to the nerves. It is particularly important that the STG be pinned down securely by the alns with short pins to provide the intracellular electrodes access to as many cells as possible. It is preferable to dissect out at least part of any of the nerves that originate from the STG even if those nerves are not needed for recording. They can provide extra anchors further stabilizing the STG on the dish. It is best to keep them fairly short for maximum support.

We gratefully acknowledge the members of the Marder Lab. We thank our advisor, Dr. Eve Marder, for her support and encouragement. This research was supported by the National Institute of Neurological Disorders and Stroke Grants NS-17813 and NS-058110. 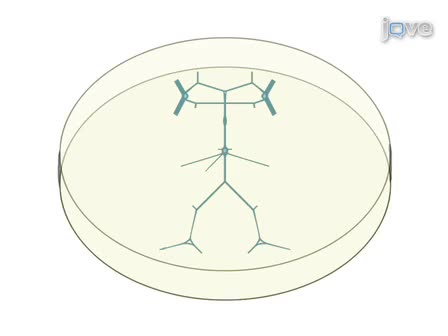