Topology of cell adhesion on a substrate is measured with nanometre precision by variable-angle total internal reflection fluorescence microscopy (VA-TIRFM).

Surface topology, e.g. of cells growing on a substrate, is determined with nanometer precision by Variable-Angle Total Internal Reflection Fluorescence Microscopy (VA-TIRFM). Cells are cultivated on transparent slides and incubated with a fluorescent marker homogeneously distributed in their plasma membrane. Illumination occurs by a parallel laser beam under variable angles of total internal reflection (TIR) with different penetration depths of the evanescent electromagnetic field. Recording of fluorescence images upon irradiation at about 10 different angles permits to calculate cell-substrate distances with a precision of a few nanometers. Differences of adhesion between various cell lines, e.g. cancer cells and less malignant cells, are thus determined. In addition, possible changes of cell adhesion upon chemical or photodynamic treatment can be examined. In comparison with other methods of super-resolution microscopy light exposure is kept very small, and no damage of living cells is expected to occur.

When a light beam propagating through a medium of refractive index n1 meets an interface to a second medium of refractive index n2 < n1, total internal reflection occurs at all angles of incidence Θ, which are greater than the critical angle Θc=arcsin(n2/n1). Despite being totally reflected the incident light beam evokes an evanescent electromagnetic field that penetrates into the second medium and decays exponentially with perpendicular distance z from the interface according to I(z) = I0 e-z/d(Θ). I(z) corresponds to the intensity of the electromagnetic field and d(Θ) to the penetration depth at wavelength λ, as given by

For the detected fluorescence intensity in TIRFM measurements, light absorption has to be integrated over all layers of the sample and multiplied with the fluorescence quantum yield η of the relevant dye as well as with the solid angle of detection Ω. As reported previously3, this intensity can be described by

if all factors which are independent from the angle of incidence Θ and the coordinate z are included within the experimental constant A. Equation 3 can be solved analytically, if the concentration c(z) of fluorophores is regarded to be almost constant

- either at all coordinates z ≥ Δ, e.g. within the cytoplasm of cells having a distance Δ from the interface. In this case, the integral has to be calculated from z= Δ to z= ∞ resulting in

- or between z = Δ - t/2 and z = Δ + t/2, i.e. within a thin layer of thickness t, e.g. a cell membrane located at a distance Δ from the interface. In this case, the fluorescence intensity can be calculated as

if t is small in comparison with Δ.

From Equations (4) and (5) cell-substrate distances Δ can be calculated, if images of fluorescence intensity IF are recorded for variable angles Θ, and if ln (IF / T d) (Eq. 4) or ln (IF / T) (Eq. 5) is evaluated as a function of 1/d for these angles. For the membrane marker laurdan used in this paper (s. below) the evaluation was performed according to Eq. 5.

As reported previously3, image acquisition and evaluation requires
- homogenous distribution of excitation light over the sample,
- validity of a 2-layer model (with the refractive indices n1 and n2 for the substrate and the cytoplasm, respectively). This holds, if the plasma membrane is very thin, and if the layer of the extracellular medium (between the cell and the substrate) is small compared with the wavelength of incident light.

In addition, a moderate numerical aperture (typically A ≤ 0.90) of the microscope objective lens is advantageous to avoid deviations of brightness due to anisotropy of radiation in the near field of the dielectric interface.

1. Seeding and Incubation of Cells

Representative experiments are carried out with genetically engineered U251-MG glioblastoma cells kindly supplied by Prof. Jan Mollenhauer, Dept. of Molecular Oncology, University of South Denmark, Odense. In two subclones of those U251 cells the tumour suppressor genes TP53 or PTEN are over-expressed using a Tet-On inducible expression system, such that these cells exhibit a reduced tumorigenic potential and may be regarded as less malignant. Highly malignant U251-MG cells without suppressor gene are used as controls, and U251-MG wild type cells serve for a further comparison. A laser diode emitting a quasi continuous series of picosecond pulses (LDH400 with driver PDL 800-B, Picoquant, Berlin, Germany; wavelength: 391 nm; pulse energy: 12 pJ; repetition rate: 40 MHz) is used as an excitation source.

In Figure 3 TIRFM images of U251-MG glioblastoma cells with an activated TP53 tumour suppressor gene and incubated with laurdan (8 μM; 60 min) are depicted for angles of incidence of 66.0°, 69.0° and 73.0° corresponding to penetration depths of the evanescent electromagnetic field of about 140 nm, 75 nm and 60 nm, respectively. With decreasing penetration depth fluorescence decreases in intensity (see scales) and originates from more superficial sites of the cells (e.g. focal contacts on their edges). Cell-substrate distances (visualized in Figure 3d by a color code ranging from 0-600 nm) strongly vary over the cells between only a few nanometers (white-yellow) and 250-300 nm (dark red), i.e. focal contacts and larger cell-substrate distances are in close vicinity. The same holds for U251-MG glioblastoma cells with an activated suppressor gene PTEN (Figure 4d), while cell-substrate distances are rather constant for U251-MG control and wild type cells with typical values of 80-100 nm (yellow; Figure 4b) and 150-200 nm (orange-red; Figure 4a). 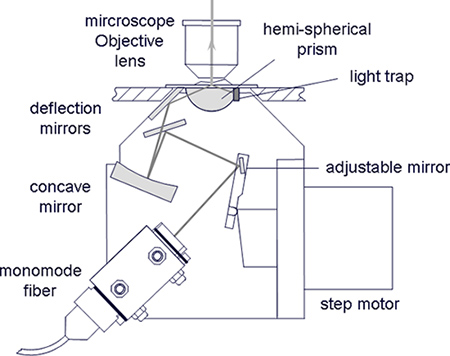 Figure 1. Illumination device for VA-TIRFM in an upright microscope. An adjustable mirror driven by a step motor permits an angular resolution of ±0.25°. 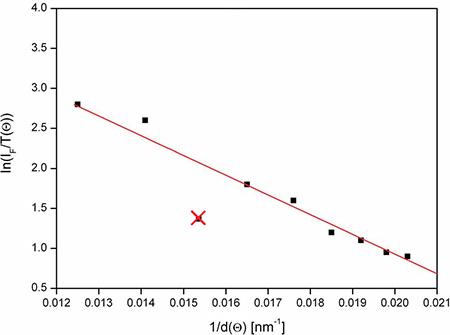 Figure 2. Evaluation profile for one pixel (schematic). When ln[IF/T(Θ)] is plotted as a function of 1/d(Θ), the slope represents the cell-substrate distance Δ. This slope is commonly determined with a precision of about ±10%. One value - resulting from inhomogeneous illumination - has been marked and excluded from evaluation. 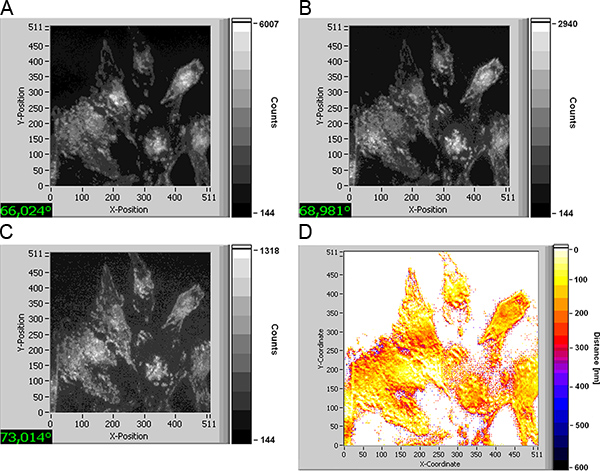 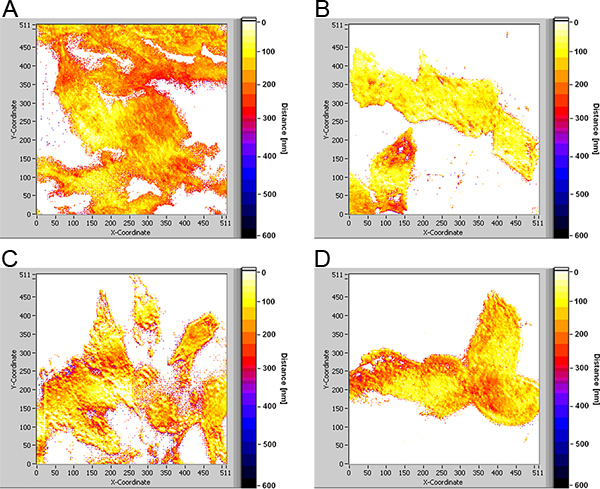 A method is described for measuring cell-substrate distances with nanometer precision. Presently, methods of super-resolution microscopy, e.g. based on structured illumination7 or on single molecule detection8-10 as well as stimulated emission depletion (STED) microscopy11 are of considerable interest. None of these techniques, however, permits an axial resolution below 50 nm. In addition, rather high irradiance of 50­100 W/cm2 is needed for single molecule methods and more than 3,000 W/cm2 for STED microscopy. This exceeds solar irradiance (about 100 mW/cm2) by several orders of magnitude, so that rapid damage to living cells is likely to occur. In VA-TIRFM experiments, however, irradiance can be limited to less than 20 mW/cm2, permitting exposure times of several minutes or even hours without any harm to living cells12, so that long-lasting experiments with multiple exposures appear well possible. Main prerequisites for each experiment are good angular calibration and homogenous illumination of clean object slides.

VA-TIRFM may be applied to numerous topics related to technical or biological surfaces, e.g. measurements of cell adhesion to a transparent substrate. Cell growth, cell migration or cell death (e.g. apoptosis) can, therefore, be studied more in detail. Recently, the role of intracellular cholesterol on cell adhesion was examined4. In particular, it turned out that the number of cell-substrate contacts was reduced upon depletion of cholesterol by 3050 %, finally leading to detachment of a larger number of cells from their substrate. Cell adhesion was also studied upon application of photosensitizers commonly used in photodynamic therapy (PDT) of cancer and other diseases13. It turned out that upon irradiation with non-phototoxic light doses cell-substrate distances were slightly reduced (possibly due to some swelling of the cell), while focal adhesions were maintained4,5. Therefore, formation of metastases due to PDT was not likely to occur. Present experiments show differences of cell adhesion between tumour (glioblastoma) and less malignant cells. Only future experiments will prove whether this different behaviour can be used for diagnostic, pharmacological or therapeutic applications.

It should be emphasized that measurements of cell-substrate contacts date back to the beginning of TIRF microscopy14. Angular resolution, however, needed rather complex equipment15, so far, and only the development of a compact illumination device for variable-angle TIRFM3 permitted routine measurements of cell-substrate topology. In addition to this prism-type TIRFM, miniaturization was introduced by objective-type TIRFM16,17, where a single spot (or annulus) close to the edge of the aperture plane of the microscope objective lens is illuminated, so that light may fall onto the sample under an angle Θ≥ΘC. Therefore, high aperture objective lenses permitting an angular range of about 66-75° are needed. Tuning of the angle Θ, however, requires a defined shift of the laser focus within a distance of less than 100 μm, which is difficult to perform, even in a commercialized TIRFM microscope. Further disadvantages of high aperture (and high magnification) objective lenses are near field anisotropy and rather limited object fields. Therefore, in comparison with objective-type TIRFM experimental setups as described in this manuscript are preferable for measuring cell-substrate topology.

The authors thank the Land Baden-Württemberg and the Europäische Union -Europäischer Fonds für die regionale Entwicklung - for funding ZAFH-PHOTONn, the Bundesministerium für Bildung und Forschung (BMBF) for funding research grant no. 1792C08 as well as the Baden-Württemberg-Stiftung GmbH for financing the project "Aurami". 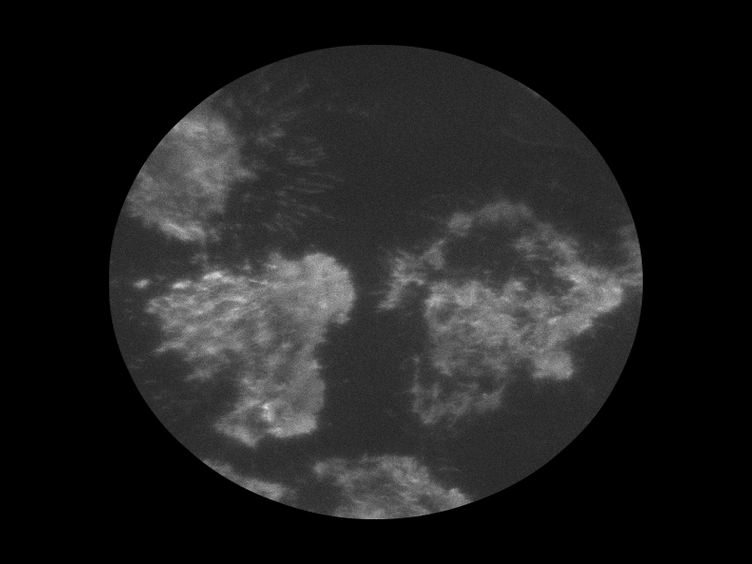