Here we show a simple and effective protocol for the generation of human iPSCs from 3-4 ml of peripheral blood using a single lentiviral reprogramming vector. Reprogramming of readily available blood cells promises to accelerate the utilization of iPSC technology by making it accessible to a broader research community.

We have shown the generation of transgene-free human iPSCs from patients with different lung diseases using a single excisable polycistronic lentiviral Stem Cell Cassette (STEMCCA) encoding the Yamanaka factors6. These iPSC lines were generated from skin fibroblasts, the most common cell type used for reprogramming. Normally, obtaining fibroblasts requires a skin punch biopsy followed by expansion of the cells in culture for a few passages. Importantly, a number of groups have reported the reprogramming of human peripheral blood cells into iPSCs7-9. In one study, a Tet inducible version of the STEMCCA vector was employed9, which required the blood cells to be simultaneously infected with a constitutively active lentivirus encoding the reverse tetracycline transactivator. In contrast to fibroblasts, peripheral blood cells can be collected via minimally invasive procedures, greatly reducing the discomfort and distress of the patient. A simple and effective protocol for reprogramming blood cells using a constitutive single excisable vector may accelerate the application of iPSC technology by making it accessible to a broader research community. Furthermore, reprogramming of peripheral blood cells allows for the generation of iPSCs from individuals in which skin biopsies should be avoided (i.e. aberrant scarring) or due to pre-existing disease conditions preventing access to punch biopsies.

Here we demonstrate a protocol for the generation of human iPSCs from peripheral blood mononuclear cells (PBMCs) using a single floxed-excisable lentiviral vector constitutively expressing the 4 factors. Freshly collected or thawed PBMCs are expanded for 9 days as described10,11 in medium containing ascorbic acid, SCF, IGF-1, IL-3 and EPO before being transduced with the STEMCCA lentivirus. Cells are then plated onto MEFs and ESC-like colonies can be visualized two weeks after infection. Finally, selected clones are expanded and tested for the expression of the pluripotency markers SSEA-4, Tra-1-60 and Tra-1-81. This protocol is simple, robust and highly consistent, providing a reliable methodology for the generation of human iPSCs from readily accessible 4 ml of blood.

2. Transduction of PBMCs with STEMCCA Lentivirus

4. Picking and Expansion of iPSC Clones

We demonstrate a simple and effective protocol for the generation of human iPSCs from PBMCs using a single lentiviral vector. Figure 1A shows a schematic representation of the protocol. The blood is collected into a BD Vacutainer CPT Cell Preparation Tube with sodium citrate, and after centrifugation, mononuclear cells can be collected from the interface between the polyester gel and the plasma (buffy coat) (Figure 1B). The isolated PBMCs are then expanded in culture for 9 days. Figure 2 compares PBMCs at day 0 and day 9, showing that the cells are noticeably dividing. Approximately 10-15 days post-transduction with the STEMCCA lentivirus, appearance of small bright colonies are observed, with still undefined colony morphology. Following the addition of hESC medium, hESC-like colonies can be easily identified (Figure 2D). Some of these colonies are mechanically picked, expanded and characterized for the expression of pluripotency markers such as SSEA-4, Tra-1-60 and Tra-1-81 (Figure 3). Using a brief Puromycin selection approach6, we are able to consistently obtain transgene-free iPSC clones as depicted in Figure 4. 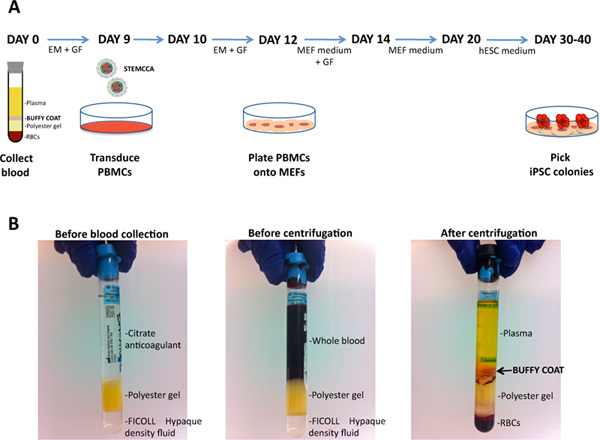 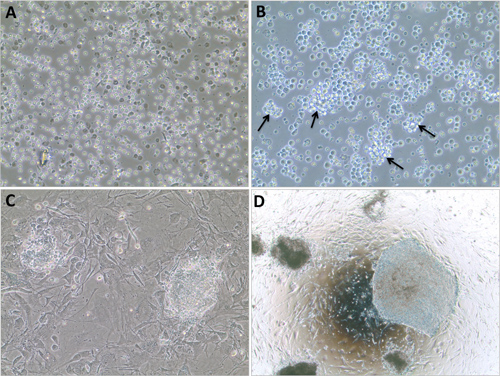 Figure 4. Generation of transgene-free iPSCs. iPSCs are transfected with a plasmid coexpressing Cre recombinase and a puromycin-resistance gene, as described in Somers et al, 2010. A) iPSCs before transfection. B) Cell death is observed after two days of puromycin selection C) New colonies emerge from resistant cells around 10 days after transfection. D) Some colonies are picked and expanded, and Southern Blot is performed to confirm the excision of the transgene. 1, 3, 5 and 7: iPSC clones before excision; 2, 4, 6 and 8: iPSC clones after excision. All phase contrast images at 4x magnification.

We herein describe the use of the STEMCCA lentiviral vector to generate human iPSCs from mononuclear cells isolated from a few milliliters of freshly collected peripheral blood. The protocol can also be used to reprogram frozen PBMCs (obtained directly from the buffy coat), a detail of significant practical implications when utilizing donor cells acquired from a distant location. Before the induction of reprogramming, isolated PBMCs must undergo a critical expansion step that renders a healthy proliferating population of cells more amenable to nuclear reprogramming. This is easily observed by the presence of 'bunch of grapes-like' clusters of cells upon expansion in hematopoietic culture conditions. When less than 5x105 cells are transduced, cells may be plated onto one or two wells of a 6-well plate containing MEFs. We have experienced some variability in the time necessary to observe hESC-like colonies, in some cases up to 25 days post-transduction. The use of ROCK inhibitor is critical to enhance the survival and cloning efficiency upon picking of emerging iPSC colonies. Remarkably and in contrast to what we observed when picking colonies from reprogrammed fibroblasts, virtually 100% of picked colonies from reprogrammed PBMCs establish stable iPSC clones that can be expanded and cryopreserved. Finally, we believe that the simplicity of the sample collection combined with the highly efficient and consistent reprogramming approach described herein, represent a bona fide platform for applications in which large numbers of iPSC clones need to be generated. 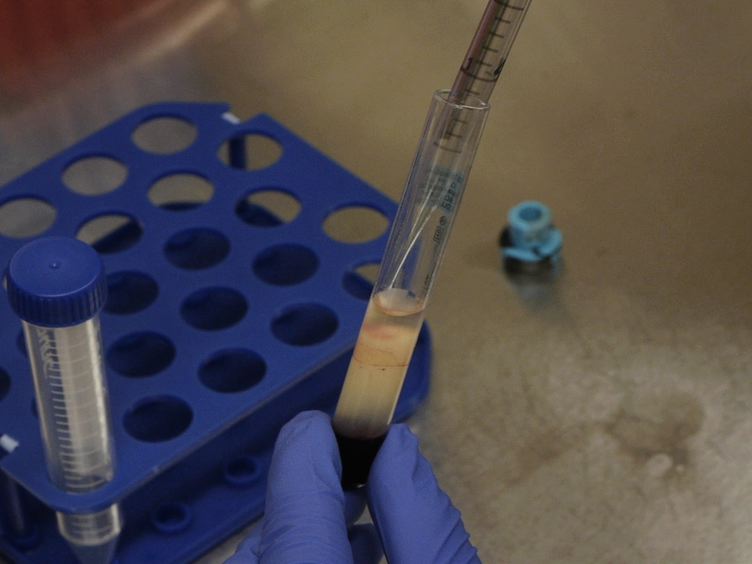