A semi-automated micro-electro-fluidic method to induce on-demand locomotion in Caenorhabditis elegans is described. This method is based on the neurophysiologic phenomenon of worms responding to mild electric fields (“electrotaxis”) inside microfluidic channels. Microfluidic electrotaxis serves as a rapid, sensitive, low-cost, and scalable technique to screen for factors affecting neuronal health.

The nematode Caenorhabditis elegans is a versatile model organism for biomedical research because of its conservation of disease-related genes and pathways as well as its ease of cultivation. Several C. elegans disease models have been reported, including neurodegenerative disorders such as Parkinson's disease (PD), which involves the degeneration of dopaminergic (DA) neurons 1. Both transgenes and neurotoxic chemicals have been used to induce DA neurodegeneration and consequent movement defects in worms, allowing for investigations into the basis of neurodegeneration and screens for neuroprotective genes and compounds 2,3.

Screens in lower eukaryotes like C. elegans provide an efficient and economical means to identify compounds and genes affecting neuronal signaling. Conventional screens are typically performed manually and scored by visual inspection; consequently, they are time-consuming and prone to human errors. Additionally, most focus on cellular level analysis while ignoring locomotion, which is an especially important parameter for movement disorders.

We have developed a novel microfluidic screening system (Figure 1) that controls and quantifies C. elegans' locomotion using electric field stimuli inside microchannels. We have shown that a Direct Current (DC) field can robustly induce on-demand locomotion towards the cathode ("electrotaxis") 4. Reversing the field's polarity causes the worm to quickly reverse its direction as well. We have also shown that defects in dopaminergic and other sensory neurons alter the swimming response 5. Therefore, abnormalities in neuronal signaling can be determined using locomotion as a read-out. The movement response can be accurately quantified using a range of parameters such as swimming speed, body bending frequency and reversal time.

Our work has revealed that the electrotactic response varies with age. Specifically, young adults respond to a lower range of electric fields and move faster compared to larvae 4. These findings led us to design a new microfluidic device to passively sort worms by age and phenotype 6.

We have also tested the response of worms to pulsed DC and Alternating Current (AC) electric fields. Pulsed DC fields of various duty cycles effectively generated electrotaxis in both C. elegans and its cousin C. briggsae 7. In another experiment, symmetrical AC fields with frequencies ranging from 1 Hz to 3 KHz immobilized worms inside the channel 8.

Implementation of the electric field in a microfluidic environment enables rapid and automated execution of the electrotaxis assay. This approach promises to facilitate high-throughput genetic and chemical screens for factors affecting neuronal function and viability.

A representative video of a wild-type young adult nematode's electrotaxis and its position and velocity outputs from the worm tracking software are shown in Supplementary Video 1 and Figure 3. The movement analysis software itself does not recognize the direction of field polarity and the time of polarity reversal; rather, this information must be obtained from the source video. This could be done using an audio or visual cue in the video or writing down experimental conditions and manipulations.

Electrotaxis speed data from a set of wild-type (N2) and transgenic animals (NL5901) are displayed in Figure 4. The NL5901 animals carry human α-synuclein gene under the control of unc-54 (myosin heavy chain gene) promoter. The expressed α-synuclein in body wall muscles aggregates 9 and our results show that it causes abnormalities in the electrotactic response. The speed of NL5901 worms is significantly slower than wild type. To plot the graph, we calculated the speed of individual worms and plotted results in a box plot using Minitab statistical software (http://www.minitab.com). In addition to speed, other parameters of movement, such as turning response (time taken to complete the reversal in response to electric field polarity change) and body bending frequency (average number of sine waves per second), can also be analyzed as described elsewhere 5.

The electrotaxis protocol works best with a synchronized population, which can be obtained via treatment with a bleach solution (sodium hypochlorite and 4 N sodium hydroxide in a 2:3 volume ratio) 10. All data presented here was obtained from synchronized populations to rule out age- and stage-dependent variation. While we have used young adults (69 hr post-L1 at 200C), other stages (L2 onwards) can also be tested. 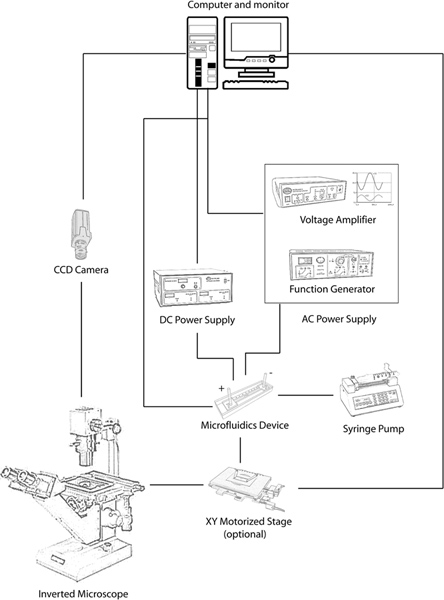 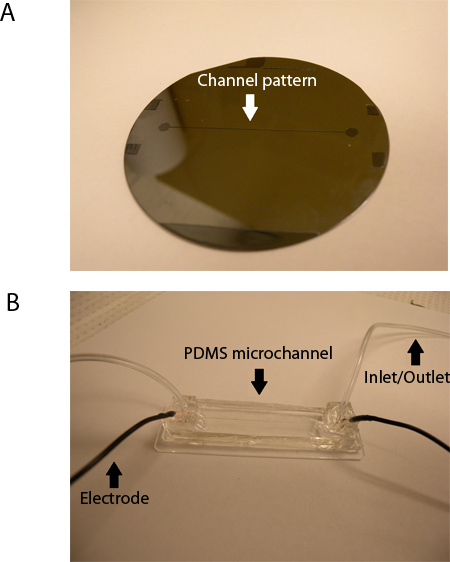 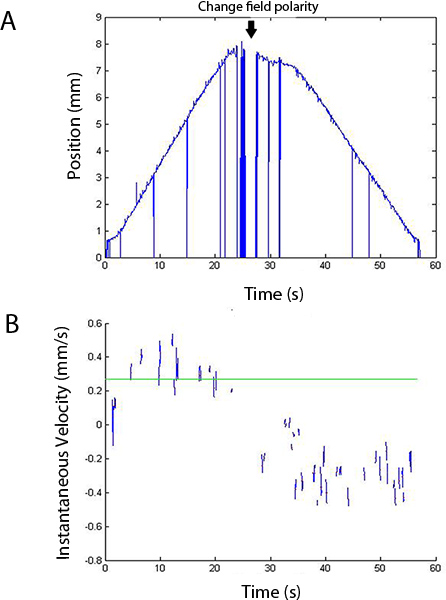 Figure 3. Position vs. time (A) and instantaneous velocity (B) outputs of custom worm tracking program. Source video is Supplementary Video 1 below. The program calculates the velocity curve from the position-time curve but disregards the spikes when calculating average speed. 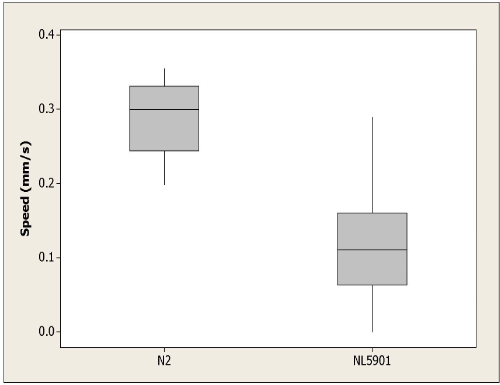 Taking advantage of the behavioural phenomenon first described by Gabel and colleagues and building on the dielectrophoretic manipulation work of Chuang and colleagues 11,12, our microfluidic-based electrotaxis assay provides an easy, robust and sensitive method to probe neuronal activity in worms using movement as an output. The analysis of movement parameters allows quantitative comparison between different genotypes. The precision of microchannel fabrication and electric field application together provide both a controllable environment and a means to communicate with the worm for locomotion control. Different electric signal wave shapes have different behavioural reflections in the worm and have been used to both stimulate and inhibit locomotion.

The single-channel design of the present microfluidic device requires that only a single worm be scored at a time. For this, worm solution must be sufficiently diluted with M9 buffer before attempting to load worms into the channel. It is important to point out that channel operations can be complicated by the presence of air bubbles and other irregularities affecting the hydrostatic pressure. This could be eliminated by flushing the channel with M9 and manipulating the elevation of the inlet and outlet tubes.

The assay described here can be improved further. A multi-channel microfluidic chip could accelerate worm screening, although it will require integration of other control mechanisms such as worm loading, positioning and tracking. Further automation of the electrotaxis protocol, especially computer-controlled flow management, will increase efficiency. These enhancements are currently under development in our laboratory.

Extraction of locomotion data from electrotaxis videos was originally performed manually using ImageJ, which is a slow and tedious process. To increase efficiency and eliminate human error, we have begun to use a worm tracking program adapted from an original MATLAB-based package developed at California Institute of Technology 13. The software currently processes single-worm videos. The latest version is suitable for a wide range of assays including chemically-treated worms and neuronal and muscle mutants. One of its limitations is that spontaneous reversals, observed in certain neuronal mutants (e.g., osm-5) 5, are not interpreted correctly. Such worms must be analyzed manually.

Limitations notwithstanding, microfluidic electrotaxis can be applied in myriad contexts, including drug discovery assays with worm models of movement-related disorders. Considering its amenability to parallelization, electrotaxis is particularly well suited for high-throughput screening applications. Genetic and age-dependent analysis of electrotactic behaviour and neuronal degeneration may also be studied with this system. Additionally, worms may be sorted by age or phenotype to form synchronized samples or to identify new mutants for forward genetic screens 6,14.

The microfluidic electrotaxis assay technology has been filed for patent in the United States of America and Canada.

The authors would like to thank the Natural Sciences and Engineering Research Council of Canada, Canada Research Chairs Program, Canadian Institutes of Health Research, and Ontario Ministry of Research and Innovation through their Early Researchers Award Program for financial support. 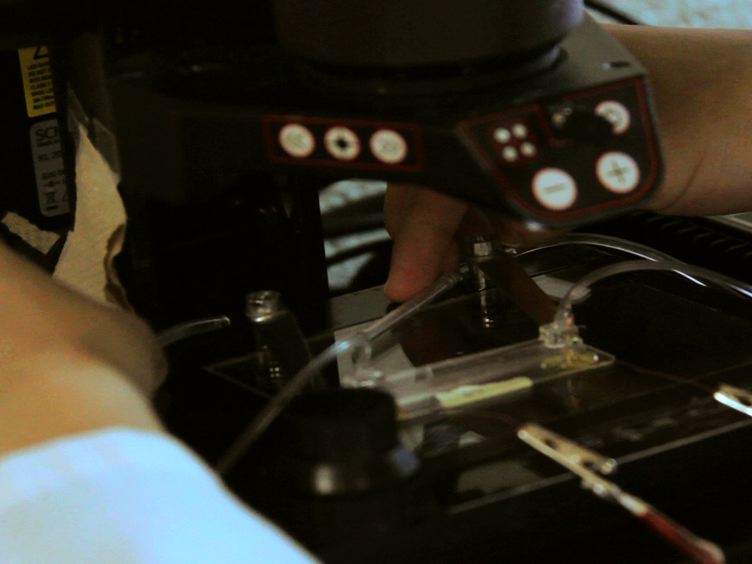