Here we describe a method for rapid and accurate measurement of flight performance in Drosophila, enabling high-throughput screening.

Drosophila has proven to be a useful model system for analysis of behavior, including flight. The initial flight tester involved dropping flies into an oil-coated graduated cylinder; landing height provided a measure of flight performance by assessing how far flies will fall before producing enough thrust to make contact with the wall of the cylinder. Here we describe an updated version of the flight tester with four major improvements. First, we added a "drop tube" to ensure that all flies enter the flight cylinder at a similar velocity between trials, eliminating variability between users. Second, we replaced the oil coating with removable plastic sheets coated in Tangle-Trap, an adhesive designed to capture live insects. Third, we use a longer cylinder to enable more accurate discrimination of flight ability. Fourth we use a digital camera and imaging software to automate the scoring of flight performance. These improvements allow for the rapid, quantitative assessment of flight behavior, useful for large datasets and large-scale genetic screens.

Drosophila has long been used to study the genetic basis of behavior1, and researchers have devised a number of ways to analyze various types of behavior2-6. Flies have been particularly useful in providing useful models of neuromuscular disorders7. A common assay used to study locomotor behavior is flight performance. The original flight tester is useful for identifying flight defective mutants and for quantitative assessment of flight ability1, but it has several shortcomings that limit its application for high throughput screens: the use of oil-coated cylinders is messy and cumbersome, certain features such as the length of the cylinder and introduction of flies into the tube with variable force reduce quantitative accuracy; and it is difficult to recover live flies from the tester. To overcome these limitations, we have modified the flight tester to include a number of improvements. We added a "drop tube" to introduce flies to eliminate variability between experiments and users. We use removable acrylic sheets coated with an adhesive that allows for easier cleanup and recovery of individual flies. We have increased the length of the flight tube to improve quantitative accuracy and reliability. Finally, we use a digital camera and imaging software to calculate the landing heights of flies. We believe these improvements will be useful to any laboratory interested in conducting large-scale genetic screens for defects in flight performance.

Figure 1A shows a schematic of the updated flight tester assembly. Figure 1B illustrates the track design allow the camera to take a panoramic image without blocking the field of view. Representative results are shown in Figure 2, where the flight performance of slowpoke mutant flies, which have a known flight defect8-10, are compared to wild-type Canton-S flies. Control flies consistently land near the top of the cylinder, with very little spread among individuals and an average landing height of 73±2.0 cm. In contrast, slowpoke flies display a much more varied landing spread, and land significantly lower, averaging 44±4.1 cm. All flies were 3 days old, raised at room temperature (23 °C). 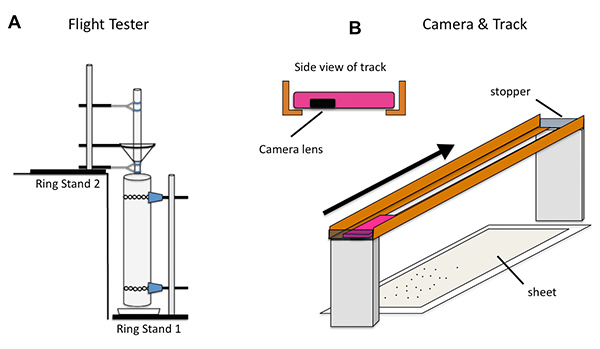 Figure 1. Diagrams of Flight Tester, Camera, and Track. (A) Illustration of the set up for the updated flight tester. Ring Stand 1 holds the 90 cm-high flight cylinder; Ring Stand 2 holds the funnel and the 10 cm-long "drop tube". (B) Diagram of camera and track used to produce a panoramic image. The camera should be supported by the track without obstructing the view from the lens. Click here to view larger image. 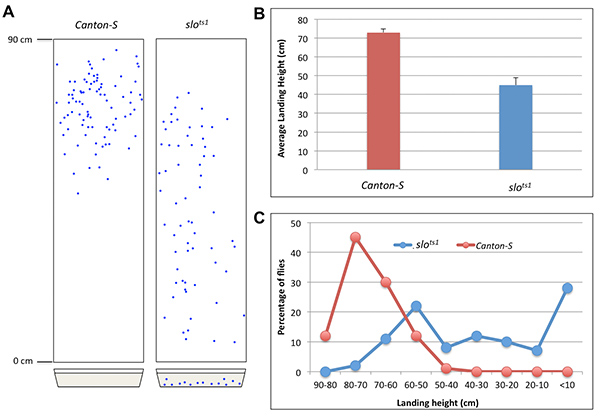 Figure 2. Representative results from a sample flight experiment. Comparison of flight ability of 3-day old Canton-S control flies to slowpoke mutants (slots1). (A) Screen captures for slowpoke and control flies displaying the landing heights of individual flies. Each blue circle represents the location of an individual fly. These landing heights are used to calculate the average landing height (B) as well as overall distribution (C) for each genotype. Male and female flies were pooled together in each sample. Error bars represent the standard error of the mean. Click here to view larger image.

Using the methods described here, we have been able to rapidly assess flight performance of a large number of Drosophila mutants, providing greater efficiency than previously possible. For our experiments, we routinely separate males and females and raise them at low density (less than 20 flies/vial) to limit aggression that could damage wings. Another important consideration is to control properly for differences in flight performance owing to differences in genetic background. We also find it helps to allow flies a minimum of 24 hr to recover from anesthetization with carbon dioxide prior to flight testing. Alternatively, flies may be anesthetized by exposure to cold temperature (4 °C) to allow for faster recovery without potentially influencing behavior.

The rate-limiting step in this protocol is removing the flies from the plastic sheet between trials. One method to increase efficiency is to use a large number of sheets simultaneously, setting aside the sheets as they are used and cleaning them all at once following data collection. Flies that fall to the bottom will need to be counted manually, as they will not be included on the sheet. Still, this is easy compared with manually calculating landing height. The need to reapply Tangle-Trap to each sheet will vary depending on how thick the coating is. In our experience, an individual sheet will last a month before a new coating is needed.

An additional advantage to using Tangle-Trap over mineral oil is the ability to recover live flies from the sheet. Since the flies simply stick to the surface of Tangle-Trap rather than becoming immersed, individual flies can be easily removed. "Flightless" flies that fall to the bottom can also be recovered by replacing the mineral oil tray with an empty flask.

We believe the automated measurement of flight behavior described here provides a number of advantages over previous methods, allowing for a higher level of throughput, reproducibility, and accuracy for genetic screens. Automated scoring has also been used to increase throughput for behavioral assays such as the RING assay11. Furthermore, the direct measurement of landing height provides a greater sensitivity than a simple pass/fail measurement (% fliers, etc.), allowing us to detect more subtle differences in flight performance.

The assay described here can be complemented by subsequent further assays that measure more complex aspects of flight behavior, including visual control of flight speed12 and free-flight responses to motion13. While these tests are more time-intensive and not amenable to large-scale genetic screens, they may help to provide more information regarding a particular gene's function in a locomotor response. 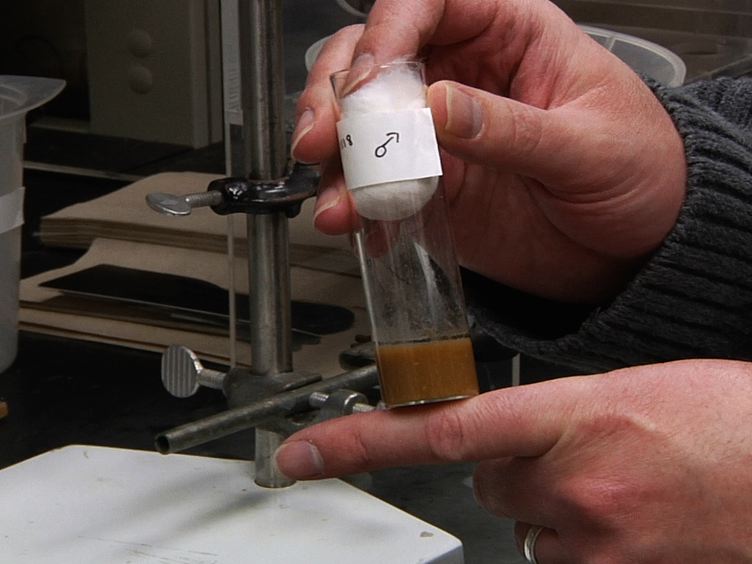