A few years ago, the establishment of human induced pluripotent stem cells (iPSCs) ushered in a new era in biomedicine. Potential uses of human iPSCs include modeling pathogenesis of human genetic diseases, autologous cell therapy after gene correction, and personalized drug screening by providing a source of patient-specific and symptom relevant cells. However, there are several hurdles to overcome, such as eliminating the remaining reprogramming factor transgene expression after human iPSCs production. More importantly, residual transgene expression in undifferentiated human iPSCs could hamper proper differentiations and misguide the interpretation of disease-relevant in vitro phenotypes. With this reason, integration-free and/or transgene-free human iPSCs have been developed using several methods, such as adenovirus, the piggyBac system, minicircle vector, episomal vectors, direct protein delivery and synthesized mRNA. However, efficiency of reprogramming using integration-free methods is quite low in most cases.

Human embryonic stem cells (hESCs) have a capacity to self-renew in vitro and have pluripotency, which could be potentially useful for disease modeling, for drug screening, and to develop cell-based therapies to treat disease and tissue injuries. However, hESCs have a limitation for cell replacement therapy because of immunological, oncological and ethical barriers, and to study disease related genes, disease-specific hESCs could be isolated through pre-implantation genetic diagnosis (PGD) approaches, but it is still technically challenging and the embryo donations are pretty rare. These issues are related to the progress in stem cell biology, which has led to the development of induced pluripotent stem cells (hiPSCs).

Human iPSCs are genetically reprogrammed from human adult somatic cells and harbor pluripotent stem cell-like features similar to hESCs, which makes them a useful source for regenerative medicine such as drug discovery, disease modeling and cell therapy in patient-specific manner1,2 .

Although a delivery of virus-mediated genes can ensure a certain level of efficiency, viral vectors could leave genetic footprint, because they integrate into host chromosomes to express reprogramming genes in an uncontrolled manner. Even when viral integration of transcription factors may activate or inactivate host genes8, it can cause an unexpected genetic aberration and the risk of tumorigenesis5,9. On the other hand, the direct introduction of proteins or RNA into somatic cells were reported, but have some disadvantages such as labor-intensive, repeated transfection, and low level of reprogramming7,10. Even episomal and non-integrating adenovirus, adeno-associated virus, and plasmid vectors are still relatively less efficient11. For these reasons, it is plausible to choose non-integration reprogramming methods with high efficacy of iPSC generation and fewer genetic abnormalities. In this study, we use a Sendai-virus based reprogramming. This method is known to be non-integrated into the host genome and consistently produces human iPSCs without transgene integrations.

1. Preparation of Cell and Media (Day 1)

8. Characterization of Human iPSCs (after 10 Passages)

Usually infected fibroblasts do not show any morphological changes in several days after Sendai virus transduction, but five days later, they start to have different shapes (Figure 1). As described in a right panel of Figure 1, cells do not have typical fibroblast morphology any more. They have a round shape and bigger nucleus than cytoplasm. Even when transduction is performed in 80% cellular confluency, it looks like they are less confluent in the well after they start to reprogram. If these kinds of morphological changes start to be seen in the most of the well, transduced fibroblasts are ready to be plated on MEF-feeder culture dishes.

In our protocol, we minimized cell culture scale and also gave various reprogramming possibilities, such as employing different fibroblast cell density and virus titer, and subsequent several re-plating ratio MEF, which will increase hiPSCs generation efficiency (Figure 2). Before transduction, the wells with different confluency (low, mid, and high) can be selected for further sendai-virus transduction; represented as red, green, and yellow color in the plate.

At the beginning of reprogramming on MEF feeders, it is hard to distinguish transduced cell types, but after over one week from co-culture, partially reprogrammed fibroblasts appear and look like loosened ES-like shape (Figure 3). Because of this reason when human iPSC colonies are ready for the passaging into new MEF feeder dish, manual picking is more efficient way for transfer instead of dissociation with enzyme.

After picking colonies and expanding hiPSC clones in several weeks, expression of stemness markers needs to be determined. After expansion of hiPSC clones, we verify them with different sets of tests, including antibody staining (SSEA4, Oct-4, TRA-81 and Nanog) and RT-PCR of pluripotent marker (data is not shown) as a quality control.

Finally, Figure 6 shows that we cannot detect any transgene expression in hiPSC clones by RT-PCR. At least over 10 passages hiPSCs, specific primers (Table 1) for exogenous Oct-4, Sox-2, Klf-4 and c-Myc can be used with positive control samples with strong transgene expression level. 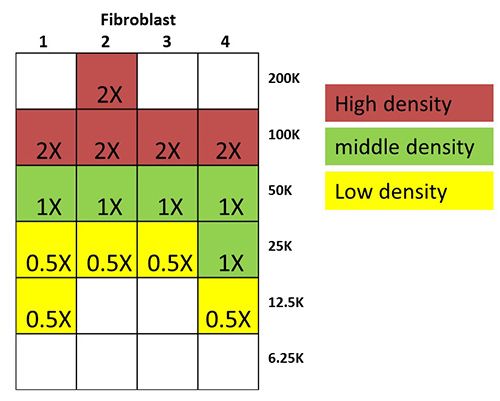 Figure 2. Diagram of induction plan to ensure maximum efficiency. Over four different cell types can be plated in a 24-well plate (from 1 to 4). Because their attachment ability and cell survival could be different depend on the cell types, it is suggested to plate different cell density (from 200K to 6.25K cells per well). In addition, virus concentration can be adjusted (0.5X, 1X and 2X). 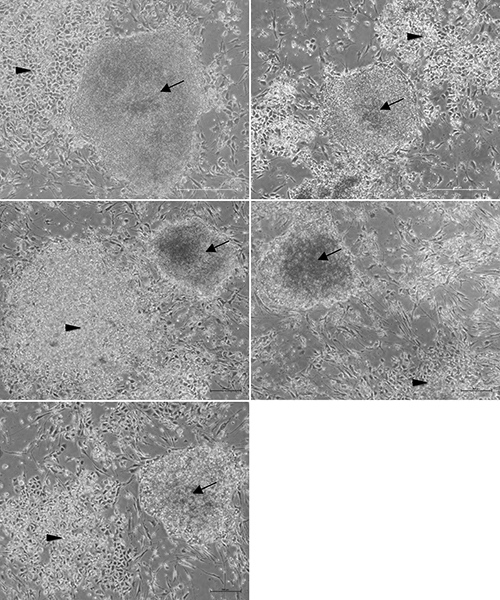 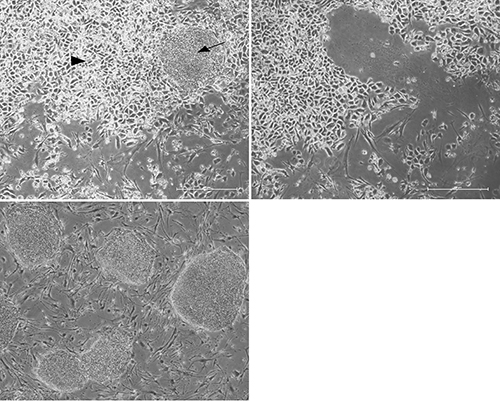 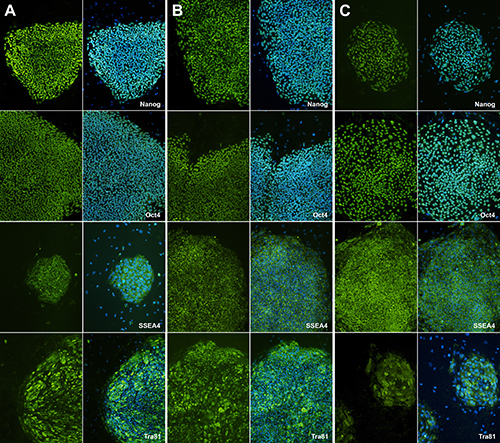 Reprogramming human somatic cells to hiPSCs holds unprecedented promises in basic biology, personal medicine, and transplantation12. Previously, human iPSC generations required DNA virus that has integration risk into the host genome, which can create undesirable genetic mutations that limit further clinical applications such as drug development and transplantation therapies13. With this reason, many studies have been reported to generate vector- and transgene-free system human iPSCs by several alternative methods, but at the same time, the efficiency of isolating 'foot-print free' human iPSCs should be considered. For example, the RNA virus should have a minimal level of genetic aberration compare to other methods14, although there is no publication for whole genome sequencing to demonstrate the 'genomic safety' of sendai virus-mediated iPSC generation yet. Here, we present a method for generating hiPSCs with the Sendai-virus which has a high reprogramming efficiency in cost-effective way. The resulting human iPSCs are free of transgene with maintenance of cellular and molecular similarities to hESCs in proliferative and developmental potential.

We can reprogram different origins of fibroblast (>4) at the same time with only one set of the Sendai-virus. And in our method, we apply various cell confluences and virus dosage differences. This 'mix and match' combination technique can maximize the reprogramming efficacy. Fibroblasts (from a single patient) in each well have a different virus infection level, but by pooling together, the possibility of making hiPSCs colonies could increase based on our experience. Other issues of the clonal variation among hiPSC lines are proliferation rate, cell attachment/survival, status of X chromosome inactivation15, differentiation potentials16, etc. Indeed, we observed that each clone has a different neural propensity, which could be predicted by measuring the expression level of a mir-371 cluster. In addition we have succeeded in generating human iPSCs from human myoblasts with this method, which suggests that the Sendai-virus can be used for many different cell types in reprogramming process. Furthermore, using our method, we have generated hiPSCs in more than 10 different disease related fibroblasts. On average, from 5 to 10 hiPSC clones could be obtained from one fibroblast.

Although the derivation of transgene-free human iPS cells with the Sendai-virus is the most efficient reprogramming method which could be the most practical paths, there are a few limitations to be considered in this protocol;
- Depending on each sendai-virus batch, the virus titer needs to be calculated for consistent MOI (as described in 2.4).
- We observed the variation of infectivity among different somatic cells, which also needs additional titration for robust viral infection.
- The Sendai virus mediated reprogramming can be considered as one of the best choices for research purposes. But for the clinical trial, it might not be the first choice, since there is a licensing issue with the company that originally developed the Sendai virus system.
- It takes around two months until the reprogrammed somatic cells are free from transgenes, which is why we need to check the transgene expression after at least 10 passages.
- It seems like that the passage number of the primary cultured fibroblast may affect the efficiency of reprogramming with the Sendai-virus, although we don't have a direct comparison. The proliferation rate also needs to be determined. Further studies are needed to determine the effect of fibroblasts passage numbers and their proliferation on the reprogramming efficiency.
- In this study, we use a mouse feeder layer for hiPSC generation and maintenance, but a feeder free system may be an alternative way in a future study.

Our current protocol has been an important step toward studying patient-specific hiPSCs for disease modeling, regenerative medicine, and other applications.

We would like to thank members of the Lee lab for valuable discussions on the manuscript. Work in the Lee lab was supported by grants from Robertson Investigator Award of New York Stem Cell Foundation and from Maryland Stem Cell Research Fund (TEDCO). 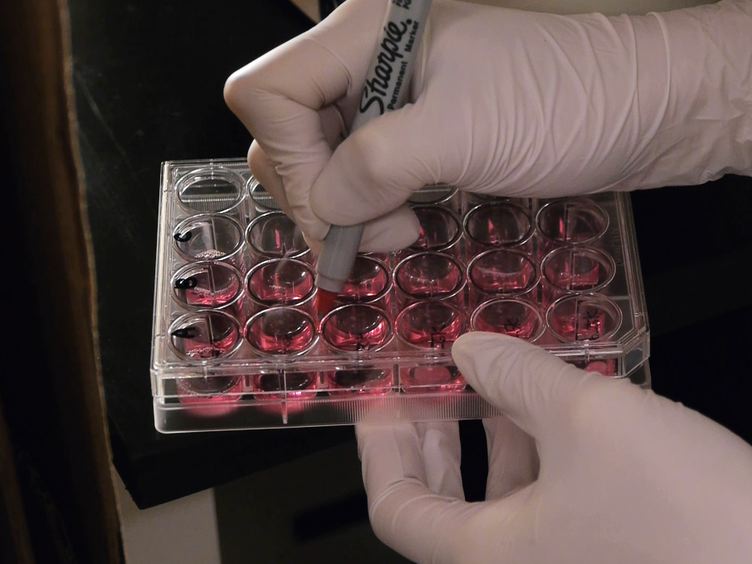