Reactive oxygen species (ROS) accumulation is a hallmark of plant abiotic stress response. ROS play a dual role in plants by acting as signaling molecules at low levels and damaging molecules at high levels. Accumulation of ROS in stressed plants can damage metabolites, enzymes, lipids, and DNA, causing a reduction of plant growth and yield. The ability of cerium oxide nanoparticles (nanoceria) to catalytically scavenge ROS in vivo provides a unique tool to understand and bioengineer plant abiotic stress tolerance. Here, we present a protocol to synthesize and characterize poly (acrylic) acid coated nanoceria (PNC), interface the nanoparticles with plants via leaf lamina infiltration, and monitor their distribution and ROS scavenging in vivo using confocal microscopy. Current molecular tools for manipulating ROS accumulation in plants are limited to model species and require laborious transformation methods. This protocol for in vivo ROS scavenging has the potential to be applied to wild type plants with broad leaves and leaf structure like Arabidopsis thaliana.

Nanoceria offer bioengineers and plant biologists a nanotechnology-based tool to understand abiotic stress responses and enhance plant abiotic stress tolerance. Nanoceria's in vivo ROS scavenging capabilities are independent of plant species, and the facile delivery into plant tissues has the potential to enable broad application outside of model organisms. Unlike other genetically-based methods, nanoceria do not require generating plant lines with the overexpression of antioxidant enzymes for higher ROS scavenging ability13. Leaf lamina infiltration of nanoceria to plants is a practical approach for lab-based research.

The overall goal of this protocol is to describe 1) the synthesis and characterization of negatively charged poly (acrylic) acid nanoceria (PNC), 2) the delivery and tracking of PNC throughout leaf cells, and 3) the monitoring of PNC-enabled ROS scavenging in vivo. In this protocol, negatively charged poly (acrylic) acid nanoceria (PNC) are synthesized and characterized by their absorption spectrum, hydrodynamic diameter, and zeta potential. We describe a simple leaf lamina infiltration method to deliver PNC into plant leaf tissues. For in vivo imaging of nanoparticle distribution within mesophyll cells, a fluorescent dye (DiI) was used to label PNC (DiI-PNC) and observe the nanoparticles via confocal fluorescence microscopy. Finally, we explain how to monitor in vivo PNC ROS scavenging through confocal microscopy.

2. Synthesis and Characterization of PNC

4. Infiltration of Plant Leaves with PNC

8. PNC Scavenging of H2O2 in vitro

PNC synthesis and characterization.
PNC were synthesized, purified and characterized following the method described in Protocol Section 2. Figure 1A shows the coloration of the solutions of cerium nitrate, PAA, the mixture of cerium nitrate and PAA, and PNC. A color change from white to light yellow is seen after PNC is synthesized. After purification with a 10 kDa filter, PNC were characterized with a UV-VIS spectrophotometer. A peak of absorbance for PNC was observed at 271 nm (Figure 1B). The final eluent was also measured with UV-VIS to confirm that the non-reacted chemicals were washed during the purification. The hydrodynamic diameter and zeta potential of the synthesized PNC were measured with a particle sizer and zeta potential analyzer (Figure 1C).

PNC labeling with DiI dye.
To determine the distribution of the nanoparticles in vivo, PNC were labeled with a fluorescent DiI dye following the method described in Protocol Section 3. DiI dye embeds within the PNC coating spontaneously since it can encapsulate into the hydrophobic domains inside the polymer coatings of nanoceria16. After adding DiI dye to the PNC solution, a rapid color change to pink was observed (Figure 2A). The DiI labeled PNC were then purified with a 10 kDa filter and characterized by a UV-VIS spectrophotometry. Three clear peaks of absorbance for the DiI labeled PNC were observed (Figure 2B). The final eluent was measured by UV-VIS spectrophotometry to confirm that the non-reacted chemicals were washed out during the purification.

Leaf Lamina infiltration.
PNC or DiI-PNC were delivered into A. thaliana leaf via leaf lamina infiltration method as described in Protocol Section 4. Leaf was infiltrated at four different spots to ensure the full leaf area was perfused with PNC solution (Figure 3A). Any remaining solution was removed from the leaf surface (Figure 3B and 3C). The leaf color changed during infiltration from green to darker green (Figure 3D). The syringe was gently pressed against the leaf to avoid any physical damage.

Leaf sample preparation for fluorescence microscopy.
Leaf samples were mounted on glass slides within an observation gel made well filled with PFD. After rolling the pea size observation gel on the slide (Figure 4A and 4B), a well was made in the middle of the flat gel (Figure 4C). Then, the freshly prepared leaf disc was transferred to the well previously filled with PFD solution (Figure 4D). A coverslip was used to immobilize the leaf sample on the slide (Figure 4E).

Confocal imaging of DiI-PNC in vivo.
DiI-PNC infiltrated A. thaliana leaves were used for determining the distribution of DiI-PNC in leaf mesophyll cells via confocal imaging (Figure 5A and 5B). To visualize colocalization between the DiI-PNC and chloroplasts, DiI-PNC infiltrated leaf samples were excited with a 514 nm laser. The emission of DiI-PNC was set at 550-615 nm to avoid the possible interference of chloroplast pigments signals after ~650 nm17. The chlorophyll auto-fluorescence from chloroplasts were detected from 700-800 nm. The confocal imaging settings were set (laser power and gain) to make sure no DiI dye signals were detected in the control leaf sample (infiltrated with only buffer) (Figure 5C). The colocalization of DiI-PNC with chloroplasts in leaf mesophyll cells can be observed by the overlay image of detected DiI-PNC and chloroplast pigment autofluorescence (Figure 5D).

Confocal imaging of PNC ROS scavenging in vivo.
PNC in 10 mM TES buffer solution were delivered into A. thaliana leaves via the leaf lamina infiltration method as described in Protocol Section 7. DHE (dihydroethidium) and H2DCFDA (2′,7′-dichlorodihydrofluorescein diacetate) fluorescent dyes are used to visualize ROS in plant tissues8,18. H2DCFDA is known to be converted to fluorescent DCF (2′,7′-dichlorofluorescein, an indicator of the degree of general oxidative stress) due to the cleavage of the acetate groups by ROS19. DHE is a more specific dye for superoxide anion having its fluorescent product (2-hydroxyethidium) increase upon reaction with a superoxide anion20. In vivo ROS scavenging enabled by PNC was monitored in leaf discs measuring DHE and DCF dye fluorescence intensity changes (Figures 6A and 6B). PNC infiltrated leaf samples were excited with 496 nm laser. The emission of DHE and DCF dye was set at 500-600 nm to avoid the possible interference with chloroplast auto-fluorescence signals. Pigment auto-fluorescence from chloroplasts were detected from 700-800 nm. After 3 minutes of UV stress, the ROS dye signals in PNC and buffer- infiltrated leaf samples were monitored separately. Compared to the no-nanoparticle buffer control (NNP), PNC infiltrated leaves showed significantly less ROS-activated fluorescent DCF dye signal (Figure 6A). Similar results were also found with the superoxide anion-activated DHE dye, where PNC infiltrated leaves had significantly less DHE dye intensity than buffer infiltrated control leaves (Figure 6B).

PNC CAT mimetic activity assay. Assay of PNC scavenging of H2O2 was described in Protocol Section 8. A decrease of resorufin which indicates H2O2 level in the reaction mixture containing PNC was observed (Figure 7), confirming the CAT mimetic activity of the synthesized PNC. 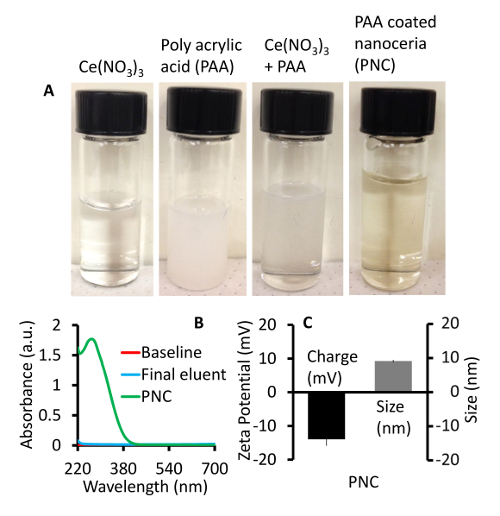 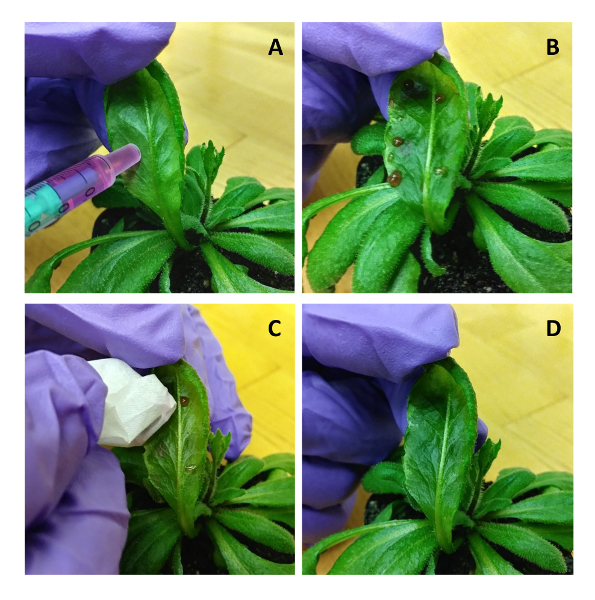 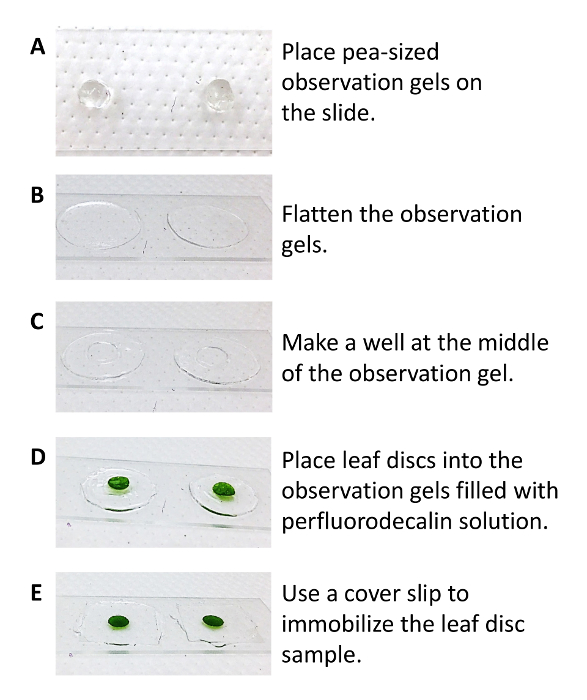 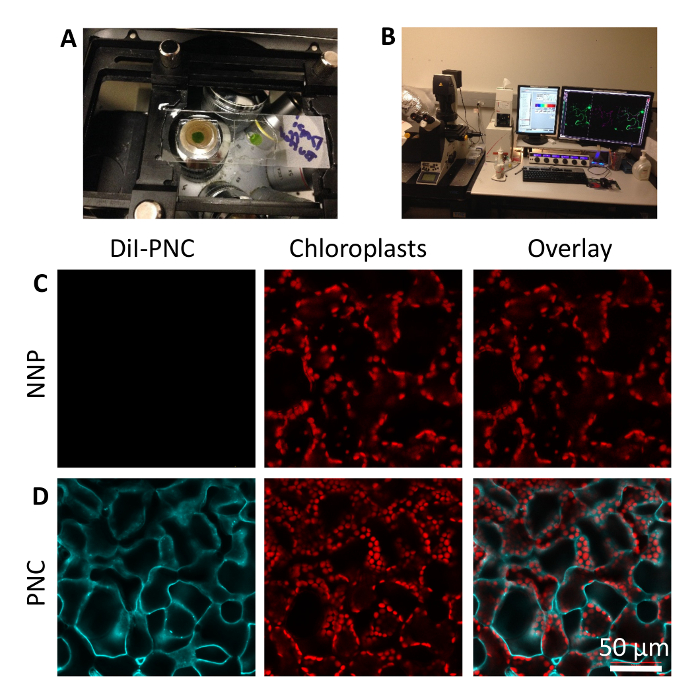 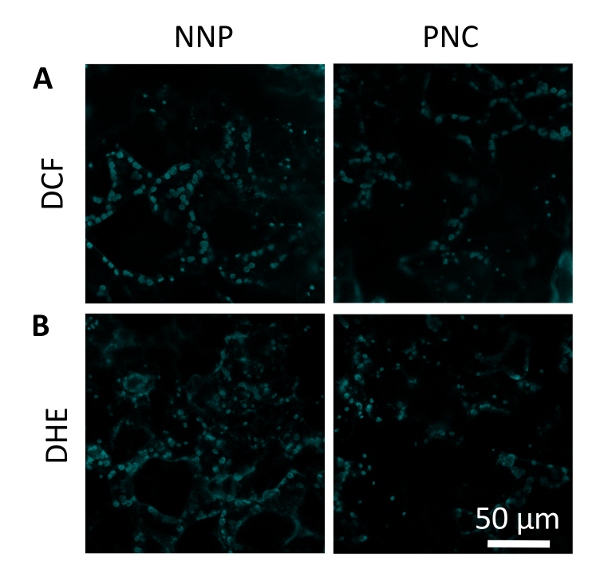 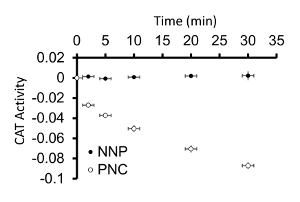 Figure 7: Catalase (CAT) mimetic activity of PNC. In the presence of horseradish peroxidase, the fluorescent probe reacts with hydrogen peroxide and is converted to resorufin (absorbance 560 nm). Absorbance of resorufin, which is indicative of hydrogen peroxide levels, was monitored at 560 nm. PNC showed a CAT mimetic activity. Mean ± SE (standard error) (n = 4). Please click here to view a larger version of this figure.

In this protocol, we describe PNC synthesis, characterization, fluorescent dye labeling, and confocal imaging of the nanoparticles within plant mesophyll cells to exhibit their in vivo ROS scavenging activity. PNC are synthesized from a mixture of cerium nitrate and PAA solution in ammonium hydroxide. PNC are characterized by absorption spectrophotomery and the concentration determined using Beer-Lamberts law. Zeta potential measurements confirmed the negatively charged surface of PNC for enhancing delivery to chloroplasts8. Labeling of PNC with a fluorescent DiI dye enables in vivo imaging by confocal microscopy within leaf mesophyll cells where the nanoparticles show high levels of colocalization with chloroplasts. Using DHE and DCF fluorescent dyes, we confirmed that PNC act as a potent scavenger of superoxide anion and ROS in vivo.

The method for synthesizing PNC is a simple step-wise procedure that generates cerium oxide nanoparticles with controlled size, negative charge, and ROS scavenging capabilities16. Other methods, such as thermal hydrolysis, require high temperatures and expensive chemistry equipment21,22. The synthesis and characterization of PNC is a low-cost method performed with common laboratory equipment. It does not require a steep learning curve compared with molecular methods in plants based on overexpression of an antioxidant enzyme, e.g., SOD, APX, and CAT, for scavenging ROS species in model systems23. PNC is a robust, water-soluble ROS catalytic scavenger that will not require laborious cloning and transformation methods that are dependent on the plant's genetic tractability and available molecular toolkit.

A critical step in this protocol is the syringe-based infiltration of leaf mesophyll cells with PNC. Infiltration of nanoparticles into live plants should be done gently to avoid physical damage to the leaf24. Thus, as in Protocol Step 4 of the methods, gently push against the leaf surface with the syringe to avoid tearing or puncturing the abaxial leaf surface. It is better to infiltrate from the abaxial surface of A. thaliana leaf since it has higher stomatal density than the adaxial surface25,26. Furthermore, a buffered solution of PNC or DiI-PNC within the physiological pH range (~ pH 7.5) should be used during leaf lamina infiltration. Another critical step in this protocol is to apply the appropriate concentration of PNC to the studied plant tissue. In this protocol, 50 mg/L of PNC was not toxic to A. thaliana leaves while enabling catalytic PNC ROS scavenging. Some limitations of the current nanoparticle delivery method are 1) not applicable to plant species having thick and waxy cuticles or low stomatal densities, 2) not scalable for applications in the field, 3) the high cost of a confocal microscopy system to monitor in vivo nanoparticle distribution and ROS scavenging.

This protocol demonstrates the application of ROS scavenging PNC for studying and improving abiotic stress tolerance in plants through a facile method of leaf lamina infiltration. ROS accumulation is accompanied by abiotic stresses in plants, which in turn reduces plant photosynthesis, growth, and yield8,27,28. Plant genetic modifications methods for ROS manipulation in vivo are often limited to plant model species while PNC ROS-scavenging has the potential to be applied to diverse wild type plant species. Leaf lamina infiltration is a practical research method to increase ROS scavenging in leaf tissues for understanding and engineering plant abiotic stress tolerance.

This work was supported by the University of California, Riverside and USDA National Institute of Food and Agriculture, Hatch project 1009710 to J.P.G. This material is based upon work supported by the National Science Foundation under Grant No. 1817363 to J.P.G. 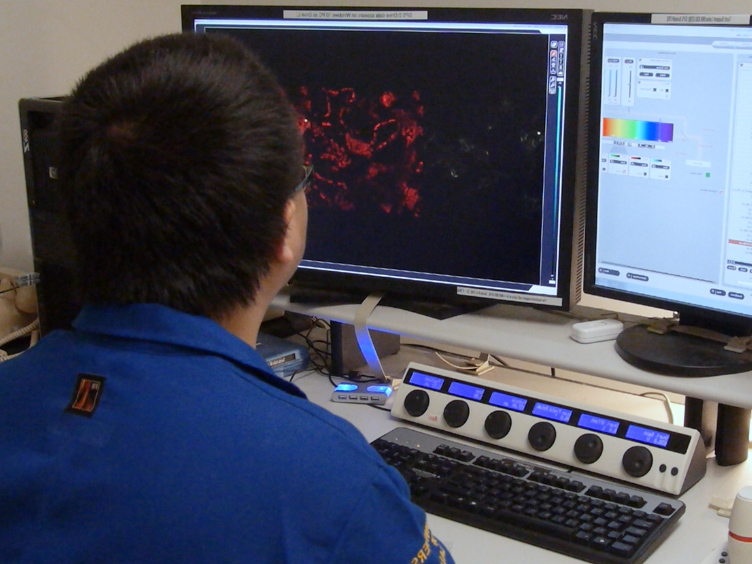