Here we describe a protocol for live cell imaging of the cortical microtubule cytoskeleton at the shoot apical meristem and monitoring its response to changes in physical forces.

Understanding cell and tissue level regulation of growth and morphogenesis has been at the forefront of biological research for many decades. Advances in molecular and imaging technologies allowed us to gain insights into how biochemical signals influence morphogenetic events. However, it is increasingly evident that apart from biochemical signals, mechanical cues also impact several aspects of cell and tissue growth. The Arabidopsis shoot apical meristem (SAM) is a dome-shaped structure responsible for the generation of all aboveground organs. The organization of the cortical microtubule cytoskeleton that mediates apoplastic cellulose deposition in plant cells is spatially distinct. Visualization and quantitative assessment of patterns of cortical microtubules are necessary for understanding the biophysical nature of cells at the SAM, as cellulose is the stiffest component of the plant cell wall. The stereotypical form of cortical microtubule organization is also a consequence of tissue-wide physical forces existing at the SAM. Perturbation of these physical forces and subsequent monitoring of cortical microtubule organization allows for the identification of candidate proteins involved in mediating mechano-perception and transduction. Here we describe a protocol that helps investigate such processes.

Plant cells are surrounded by an extracellular matrix of polysaccharides and glycoproteins that mechanically resembles a fiber reinforced composite material capable of dynamically changing its mechanical properties1. Growth in plant cells is driven by the uptake of water into the cell, which results in a concomitant buildup of tensile forces on the cell wall. In response to such forces, modifications to the physical state of the cell wall allows for cell expansion. Cells with primary walls are capable of undergoing rapid growth compared to secondary cell wall containing cells mainly due to differences in the chemical composition of the polysaccharides within. Primary wall cells are composed of cellulose, hemicellulose, and pectin in addition to glycoproteins, and lack lignin, a component that is present in the secondary cell wall2. Cellulose, a glucose polymer linked via β-1,4 bonds, is the major component of the cell walls. It is organized into fibrillar structures that are capable of withstanding high tensile forces experienced during cell growth3. In addition to withstanding tensile forces, mechanical reinforcement along a preferential direction results in turgor-driven expansion along an axis perpendicular to the net orientation of the cellulose microfibril. The organization of the cellulose microfibrils is influenced by the cortical microtubule cytoskeleton, as they guide the directional movement of the cellulose-synthesizing complexes located at the plasma membrane4. Therefore, monitoring cortical microtubule organization using a microtubule-associated protein or tubulin fused with a fluorescent molecule serves as a proxy for the observation of overlying patterns of cellulose in plant cells.

The patterning of the cortical microtubule cytoskeleton is under the control of cell and tissue morphology derived mechanical forces. Cortical microtubule organization does not have any preferential organization over time in cells located at the apex of the SAM, whereas cells in the periphery and the boundary between the SAM and the emerging organ have a stable, highly organized supracellular array of cortical microtubules5. Several approaches have been developed to physically perturb the mechanical status of the cells. Changes to osmotic status, as well as treatment with pharmacological and enzymatic compounds that influence the stiffness of the cell wall can result in subsequent changes in the tensile forces experienced by the cell6,7. The use of contraptions that allow for the gradual increase in compressive forces experienced by tissues is another alternative8. Application of centrifugal forces has also been shown to influence the mechanical forces without any physical contact with the cells9. However, the most widely used means of changing directional forces in a group of cells take advantage of the fact that all epidermal cells are under tension and physical ablation of cells will eliminate turgor pressure locally as well as disrupting cell-to-cell adhesion, thereby modifying the tensile forces experienced by the neighboring cells. This is performed either by targeting a high-powered pulsed ultraviolet laser or by means of a fine needle.

Here we elaborate on the process of imaging and assessing cortical microtubule behavior for mechanical perturbation at the SAM.

3. Dissection of the SAM

4. Transfer and growth of cultured SAMs

5. Imaging of the SAM

6. Micromechanical perturbation of the SAM 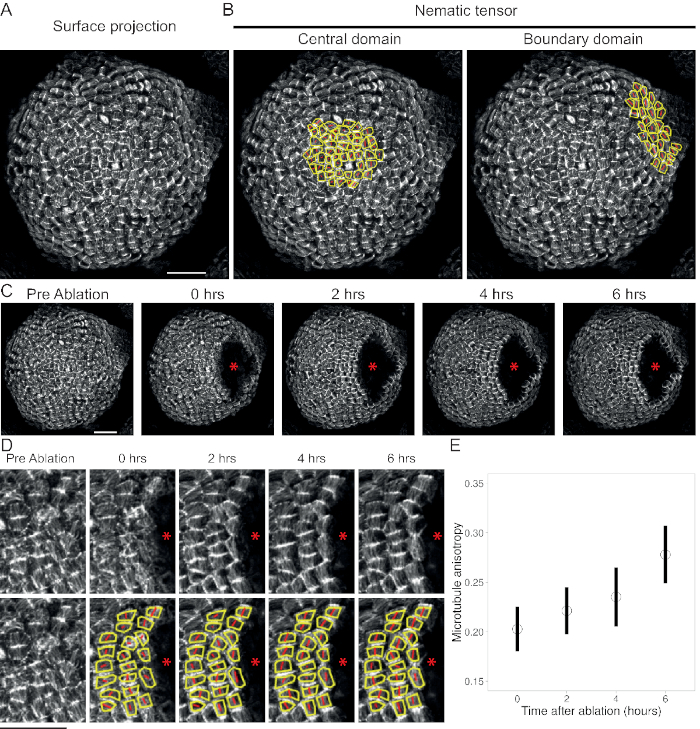 The assessment of mechanical signal transduction events is crucial to identify molecular regulators involved in the mechano-perception and transduction pathways. The protocol described here provides a quantitative view of such events by using the cortical microtubule response as a readout for such a process in Arabidopsis SAMs. The procedure described here is routinely used in several studies in various tissue types16,17,18,19. A significant increase in microtubule anisotropy is observed in the range of 4 h in all tissue types.

The most critical step in the protocol is ensuring that alterations to the microtubules do not occur due to prolonged submergence in water, because water on its own results in an increase of the cells' turgor pressure. Therefore, the imaging time should be minimized. This can compromise the image resolution, but it provides a more accurate readout of the perturbation results. The second most crucial step is careful dissection of the SAM. Due to its very small size, it is very likely to be damaged during the procedure. The organs become more difficult to remove if the peduncles of older organs are not entirely removed. Finally, during dissection the sample should not be allowed to dry out due to prolonged air exposure of the SAM. This is especially common when handling mutant SAMs that are hard to access or that are smaller than 50 µm in diameter. Frequent application of water drops on the SAM between the dissection steps prevent this issue.

A limitation of this procedure is that there is no real control over the ablated area. This is an issue in comparing changes occurring in different conditions and genotypes. Therefore, it is necessary to use control SAMs perturbed in a similar manner for comparison. Another alternative is performing a more controlled ablation using a pulsed ultraviolet laser20. In addition, while ablation is widely known to create changes in mechanical properties, it is also associated to a certain degree with wound-induced responses. For this reason, other approaches, such as mechanical compression and turgor-induced perturbations need to be performed to confirm the observations6,9.

A significant advantage of this method compared to other ways of manipulating mechanical forces is that it uses very basic tools yet provides a robust readout of microtubule response. 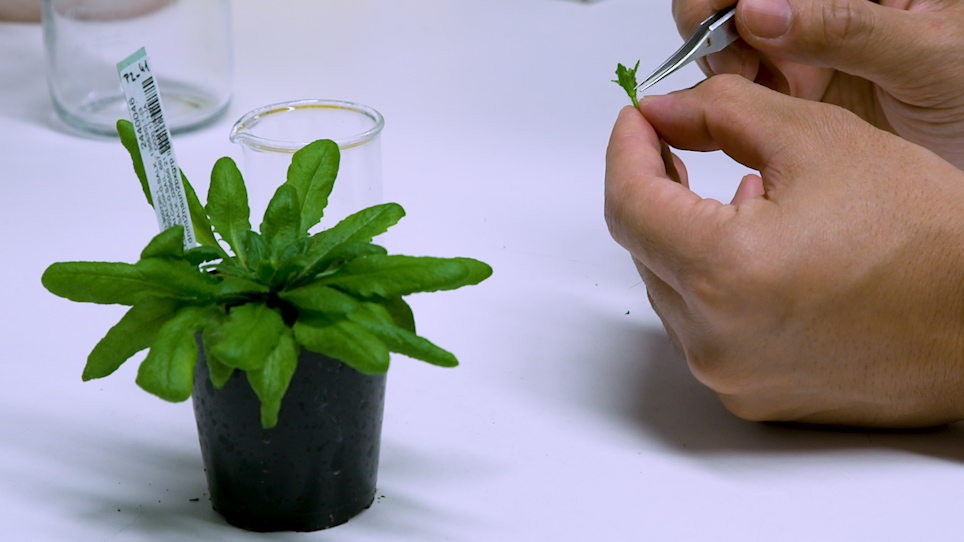