We present a model of neonatal intraventricular hemorrhage using rat pups that mimics the pathology seen in humans.

Neonatal intraventricular hemorrhage (IVH) is a common consequence of premature birth and leads to brain injury, posthemorrhagic hydrocephalus (PHH), and lifelong neurological deficits. While PHH can be treated by temporary and permanent cerebrospinal fluid (CSF) diversion procedures (ventricular reservoir and ventriculoperitoneal shunt, respectively), there are no pharmacological strategies to prevent or treat IVH-induced brain injury and hydrocephalus. Animal models are needed to better understand the pathophysiology of IVH and test pharmacological treatments. While there are existing models of neonatal IVH, those that reliably result in hydrocephalus are often limited by the necessity for large-volume injections, which may complicate modeling of the pathology or introduce variability in the clinical phenotype observed.

Neonatal IVH originates from the germinal matrix, a site of rapid cell division that is adjacent to the lateral ventricles of the developing brain. This highly vascular structure is vulnerable to hemodynamic instability related to premature birth. Blood is released into the lateral ventricles in germinal matrix hemorrhage (GMH)-IVH when fragile blood vessels within the germinal matrix rupture. In the case of grade IV IVH, periventricular hemorrhagic infarction may also contribute to the release of blood products within the brain.1 The combination of GMH-IVH may cause PHH, particularly after high-grade hemorrhage (grades III and IV)1. PHH can be treated with the placement of a ventriculoperitoneal shunt, but shunt placement does not reverse the brain injury that may occur from IVH. Although modern neonatal intensive care has lowered rates of IVH2, 3, there are no specific treatments for the brain injury or hydrocephalus caused by IVH once it has occurred. A significant limitation in developing preventative treatments for IVH-induced brain injury and PHH is the incomplete understanding of IVH pathophysiology.

In this study, we developed a clinically relevant model of IVH-induced brain injury and hydrocephalus utilizing hemoglobin injection into the brain ventricles, which allows for quantification of brain injury and PHH and the testing of new therapeutic strategies (Figure 1)6, 7. This IVH model utilizes neonatal rat pups, which are placed under general anesthesia for the duration of the procedure. A midline incision is made on the scalp, and coordinates derived from skull landmarks—the bregma or lambda—are used to target the lateral ventricles for injection. Slow injection using an infusion pump delivers hemoglobin into the ventricle. This protocol is easy to use, versatile, and can model different components of IVH that result in PHH.

NOTE: All animal protocols were approved by the institutions' Animal Care and Use Committee. See the Table of Materials for details about all materials, reagents, equipment, and software used in this protocol.

1. Preparation of hemoglobin and CSF solutions

2. Preparation of the animal for injection

3. Setting up the stereotactic injector

The success of injection was confirmed by radiologic and immunohistochemical means. Animals that underwent hemoglobin injection developed moderate acute ventriculomegaly when assessed via MRI (Figure 2A), with significantly larger lateral ventricles at 24 h and 72 h post hemoglobin injection compared to aCSF-injected animals (Figure 2B,C). While there was no significant difference in lateral ventricle volume between hemoglobin-injected and aCSF-injected animals 38 days post injection (Figure 2D), it is important to note that 44% (4/9) of the animals in the hemoglobin-injected group that were followed to 38 days post injection displayed unresolved ventriculomegaly at this timepoint (Figure 2D). This wide distribution in ventricle sizes is a pattern that is consistent with the clinical course of IVH-PHH. In addition, white matter volume was quantified at 38 days post injection (Figure 3) and was significantly decreased in the hemoglobin-injected group compared to the aCSF-injected group (Figure 3B).

We previously published a study detailing the acute inflammatory reaction that occurs after hemoglobin injection9. In this present study, proinflammatory cytokines were evaluated for tumor necrosis factor-alpha (TNFα) production in vivo (Figure 4), and immune cell infiltration into the periventricular areas and white matter were evaluated using glial fibrillary acidic protein (GFAP) immunofluorescence (Figure 5). Injection of 15 µL of hemoglobin, whole blood, or saline into the lateral ventricle of postnatal day 5 rats resulted in higher levels of proinflammatory cytokine TNFα 3 h after hemoglobin injection compared to whole blood and saline (Figure 4). There were significantly more reactive astrocytes in the corpus callosum of hemoglobin-injected animals compared to aCSF-injected animals (Figure 5). Finally, other blood breakdown products have been utilized in this fashion including iron and ferritin to reliably result in ventriculomegaly and hydrocephalus6,7. 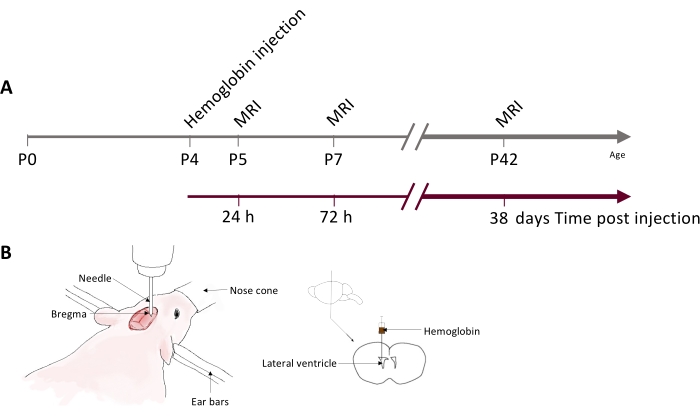 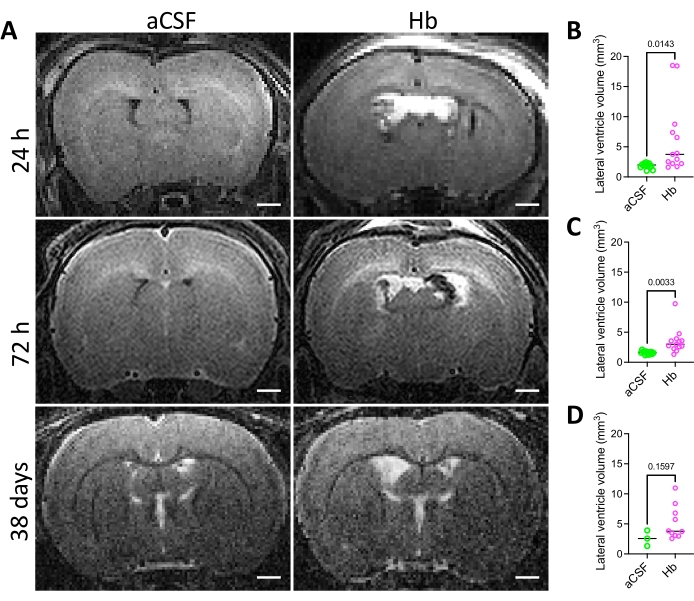 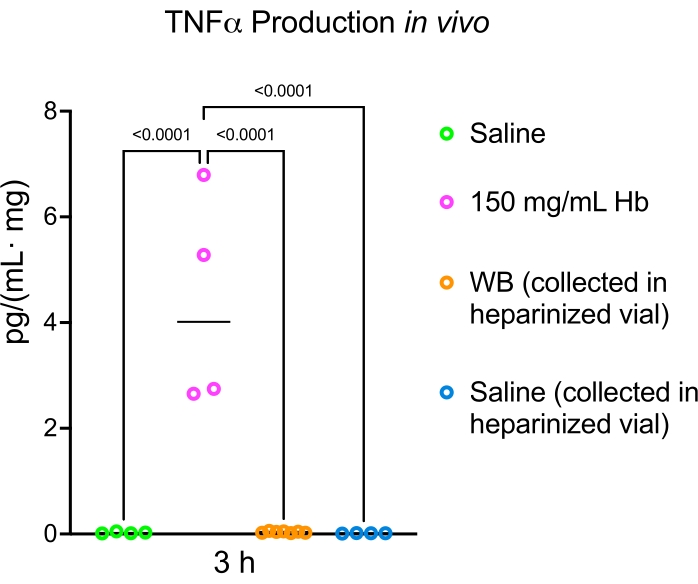 This IVH model utilizing hemoglobin injection allows for the study of the pathology of IVH specifically mediated by hemoglobin. For complementary studies, hemoglobin can also be easily delivered in vitro and does not confound biochemical assays for proteins made by microglia/macrophages that are present in whole blood.

The leading theories of IVH-PHH include the mechanical obstruction of CSF circulation, the disruption of cilia lining the ependymal walls, inflammation, fibrosis, and iron toxicity10. Existing animal models for IVH such as the collagenase-induced rat pup model induce IVH through direct injury and disruption of the extracellular matrix11, while others such as the glycerol-induced rabbit pup model induce IVH as an effect of intracranial hypotension12. Additional models use autologous and donor rat blood injection into the lateral ventricles13, 14. While these and other existing models present important features for the study of IVH-PHH, they focus on the impact of blood within the ventricle without considering the role of specific components of the blood released during  hemorrhage on the development of neurological sequelae following IVH.

Ventricular enlargement after IVH in humans can be due to brain parenchymal loss (sometimes referred to as hydrocephalus ex vacuo) or hydrocephalus, which indicates increased CSF pressure. These processes can occur together15 and it can be difficult to determine to what extent ventricular changes are due to increased CSF pressure versus volume loss without invasive procedures. This model, which allows for both the assessment of ventricular size radiologically in living animals and the assessment of tissue injury via histology, can help researchers understand the relationship between the two and, more importantly, assess to what extent potential therapies reverse brain injury.

Traditionally, interspecies comparisons of brain development have relied primarily on postmortem brain mass. A seminal study by Dobbing and Sands conducted with this method estimated P7 to be a major period of brain growth in rodents, comparable to the changes observed in human neonates born at term16. More recently, studies comparing developmental milestones such as oligodendrocyte maturation and establishment of the blood-brain barrier have defined P1–P3 in rodents to be analogous to 23–32 weeks gestation in human neonates17,18,19,20,21. In addition, the germinal matrix does not involute until P7 in rats22. Therefore, the P4 rats used in this model correspond to a period of brain maturation in which the germinal matrix is present, with characteristics that we believe are representative of the human population at risk for IVH-PHH. Furthermore, the rate of unresolved ventriculomegaly at 38 days after hemoglobin injection in this study (44%) is comparable with clinical rates of PHH after IVH (30%)23.

Limitations of our postnatal rat IVH model include the use of a lissencephalic animal and the lack of direct injury to the germinal matrix and/or periventricular parenchyma. However, this model has several benefits including good reproducibility, low cost, and versatility that allows for the use of different aged animals and radiologic (Figure 6), biochemical, and histological analyses. Future laboratory work on the pathophysiology of IVH may lead to better treatments for this condition.