Here we describe a method to efficiently expand and purify large numbers of human NK cells and assess their function.

NK cell adoptive therapies to date have utilized a cell product obtained by steady-state leukapheresis of the donor followed by depletion of T cells or positive selection of NK cells. The product is usually activated in IL-2 overnight and then administered the following day 1. Because of the low frequency of NK cells in peripheral blood, relatively small numbers of NK cells have been delivered in clinical trials.

The inability to propagate NK cells in vitro has been the limiting factor for generating sufficient cell numbers for optimal clinical outcome. Some expansion of NK cells (5-10 fold over 1-2 weeks) has be achieved through high-dose IL-2 alone 2. Activation of autologous T cells can mediate NK cell expansion, presumably also through release of local cytokine 3. Support with mesenchymal stroma or artificial antigen presenting cells (aAPCs) can support the expansion of NK cells from both peripheral blood and cord blood 4. Combined NKp46 and CD2 activation by antibody-coated beads is currently marketed for NK cell expansion (Miltenyi Biotec, Auburn CA), resulting in approximately 100-fold expansion in 21 days.

1. Isolation of PBMCs from Buffy Coat

NOTE 1. NK cells can be expanded directly from PBMCs, or from RosetteSep purified NK cells. We have noted similar expansion efficiency, but some donors may have very low NK cell numbers resulting in difficulty purifying by RosetteSep prior to expansion.

NOTE 2. We routinely use CD56-FITC, CD16-PE, and CD3-PE-Cy5 for phenotyping during the expansion, enumerating NK cells as those which are CD3-negative and CD16- or CD56-positive.

NOTE 3. At each media change or stimulation, resuspend cells at 2.5 x 105/mL to keep PBMC/NK cell numbers at or under 2 million per mL at peak stages of expansion. This will prevent depletion of nutrients and help achieve maximal expansion and survival.

NOTE 4. The NK expansion rate is donor dependent and at the end of stimulations 1 or 2 part of the cells can be frozen and part expanded further depending on the experimental need. We have had good success in using the frozen cells for expansions at a later time.

NOTE 5. In order to allow room for error we recommend using a minimum of 7x105 NK cells resuspended in 700 uls of NKEM and 4x105 Calcein-AM stained target cells resuspended in 4 mL of NKEM for setting up the cytotoxicity assay. If using multichannel pipette for seeding target cells higher volumes of cells (up to 6x105 in 6 mL) may be required based on the size of media basin being used. Also the recommended NK cell numbers are specifically for the E:T ratios show in the protocol, for using higher E:T ratios increase the NK cell numbers per mL accordingly (eg. For a 40:1 E:T ratio use 4x106 cells/ mL)

NOTE 6. We recommend performing a preliminary Calcein-AM loading titration for the target cell line of choice, using the following dilutions of 1:500, 1:400. 1:300, 1:200 and 1:100 to achieve optimal difference between maximum and spontaneous release.

NOTE 9. If performing an ADCC experiment, after 45 minutes of calcein loading, add 10ug of antibody specific for inducing ADCC against the target cells. After 15 more minutes, wash target cells in complete medium twice, centrifuging for 5 min at 1200 rpm. Resuspend cells at 1x105 cells/ mL and proceed with the next step in the protocol. 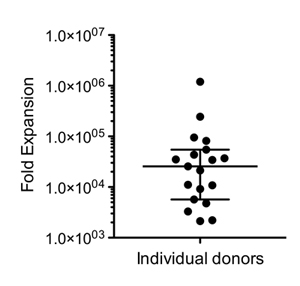 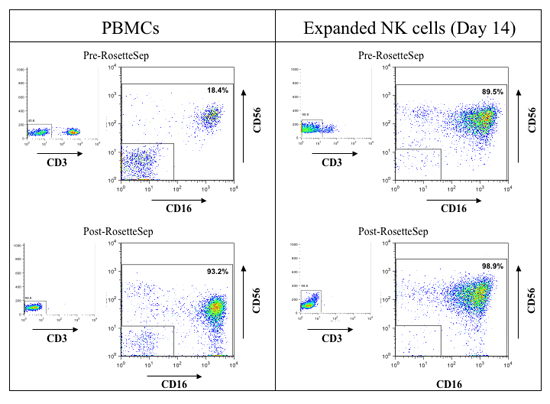 Figure 4. PBMCs recovery from Buffy coat is donor dependent and can range from 300x106 to 800x106. NK cells may comprise 2% - 18% of the PBMCs. For RosetteSep purification of expanded cells, recovery of pure NK cells on day 14 ranges from 40-70%. By following the recommended protocol of expansion and purification, NK cell purity of 99% can be expected.

The authors would like to thank Laurence Cooper, Harjeet Singh, and Lenka Hurton for their work in creating the initial K562 aAPC and mIL21 fusion vectors.

Funding for this work was provided by the UT MD Anderson Physician Scientist Program, the St. Baldrick's Foundation, and the Legends of Friendswood.