We describe a matrigel plug assay to illustrate angiogenic potential of a pool of factors secreted by cancer cells using two complementary imaging modalities, ultrasound and endomicroscopy. The matrigel, an extracellular matrix (ECM)-mimic gel, is utilized to introduce the host (mouse) with angiogenic factors secreted to the conditioned media (C.M.).

The subcutaneous matrigel plug assay in mice is a method of choice for the in vivo evaluation of pro- and anti-angiogenic factors. In this method, desired factors are introduced into cold-liquid ECM-mimic gel which, after subcutaneous injection, solidifies to form an environment mimicking the cancer milieu. This matrix permits the penetration of host cells, such as endothelial cells, and therefore, the formation of vasculature.

Herein we propose a new modified matrigel plug assay, which can be exploited to illustrate the angiogenic potential of a pool of factors secreted by cancer cells, as opposed to a specific factor (e.g., bFGF and VEGF) or agent. The plug containing ECM-mimic gel is utilized to introduce the host (i.e., mouse) with a pool of factors secreted to the C.M. of fast-growing tumor-generating glioblastoma cells. We have previously described an extensive comparison of the angiogenic potential of U-87 MG human glioblastoma and its dormant-derived clone, in this system model, showing induced angiogenesis in the U-87 MG parental cells. The C.M. is prepared by filtering collected media from confluent tissue culture plates of either cell line following 48 hr incubation. Hence, it contains only factors secreted by the cells, without the cells themselves. Described here is the combination of two imaging modalities, microbubbles contrast-enhanced ultrasound imaging and intravital fibered-confocal endomicroscopy, for an accurate, real-time characterization of the extent, morphology and functionality of newly-formed blood vessels within the plugs.

The matrigel plug angiogenesis assay was first described by Kibbey et al. in 1992, where it was used to evaluate angiogenesis stimulation by the peptide SIKVAV (Ser-Ile-Lys-Val-Ala-Val)1. In contrast to other in vivo angiogenesis assays, like the mouse corneal angiogenesis or chick chorioallantoic membrane assays, this assay is relatively easy to perform2. The injected ECM-mimic gel may contain cells, pro-angiogenic or an anti-angiogenic compounds and/or factors. When evaluating the activity of an anti-angiogenic compound, the plug normally contains a mixture of vascular endothelial growth factor (VEGF) and fibroblast growth factor (FGF), and the anti-angiogenic substance can be administered directly into the plug or systemically3,4.

The ECM-mimic gel is injected subcutaneously where it solidifies within minutes. Assessment of blood vessel recruitment in the resulting plug is typically performed by measuring hemoglobin levels within the plug, by fluorescence signal measurement following injection of fluorescein isothiocyanate (FITC)-labeled dextran, by immunostaining of histology sections for endothelial-specific markers or by fluorescence-activated cell sorting (FACS)2,5,6. However, this assessment only allows end-point analysis and lacks information about the functionality and morphology of blood vessels. In addition, measurements of plasma volume, either by hemoglobin levels or by using dextran-FITC as an indicator, may be misleading since blood content is affected by the size of blood vessels and the extent of stagnant pools of blood. This is especially crucial when the recruited vasculature is characterized by the enhanced permeability and retention (EPR) effect7.

We herein propose a new, more precise, method for visualization of the recruited blood vessels by combining two complementary imaging modalities. High-resolution microbubbles contrast-enhanced ultrasound (US) combined with intravital fibred-confocal endomicroscopy can provide information not only about blood vessel density, but also on their morphology and functionality. Moreover, this analysis can be performed at several time points thereby enabling monitoring of angiogenesis kinetics. US is a widely-used imaging modality which possesses high spatial resolution for blood vessels imaging following intravenous (i.v.) injection of microbubbles that remain exclusively in the vascular compartment8-11. The microbubbles are gas-filled microbubbles that produce a strong echogenic signal when excited with an US pulse and thus serve as a good contrast agent. 3D images of the plug are acquired using the US imaging system software following microbubbles destruction. The resulting images are composed from image frames of pre- and post-destruction of microbubbles and reflect the difference in video intensity in color. These overlayed images are automatically displayed by the software. Consequently, the percent of functional vessels within the plug can be quantified. High resolution fibered confocal endomicroscopy serves as a complementary imaging modality by reporting on blood vessels morphology. In this minimally invasive method, images are acquired following i.v. administration of FITC-conjugated dextran12. The fluorescent polymer dyes the bloodstream and thus serves as a 'contrast agent' for blood vessels morphology and blood flow. Moreover, since the injected polymer is at a size of 70 KDa, it can only cross leaky vessels as found in tumor vasculature. This will result in high background from the FITC-labeled dextran outside the blood vessels. Consequently, fibered confocal endomicroscopy can be used to visualize typical characteristics of the EPR effect in tumor neovasculature- enlarged, leaky, highly-tangled vessels, with blunt ends.

NOTE: All animal procedures were approved and performed in compliance with the standards of Tel Aviv University Sackler School of Medicine Institutional Animal Care and Use Committee (IACUC).

NOTE: This part of the protocol requires previous knowledge of operating an ultrasound imaging system, or the assistance of an authorized technician.

NOTE: this part of the protocol is performed immediately following US imaging and it requires previous knowledge of operating the fibered confocal endomicroscopy imaging system, or the assistance of an authorized technician.

The morphology of these newly-formed blood vessels is emphasized by fibered confocal endomicroscopy (Figure 2). Blood vessels within plugs loaded with U-87 MG C.M. exhibited morphology typical to the enhanced permeability and retention (EPR) effect for macromolecules such as Dextran-FITC at 70 kDa size used here. Blood vessels were enlarged and highly tangled, with non-continuous and sluggish flow (Figure 2A, C). Also, leakage of blood was observed to the surrounding environment, as shown by high fluorescent signal outside the blood vessels (Figure 2B). 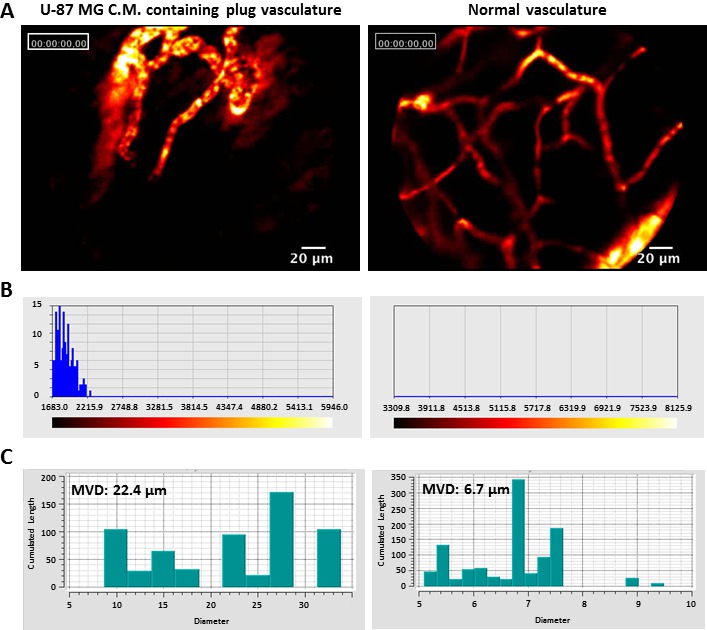 Combining complementary imaging methods allows the acquirement of information on different angiogenesis components' microvessel density, functionality and morphology. Loading C.M. on ECM-mimic gel plugs generates a tumor microenvironment, which is separated from other cell populations, like endothelial cells, that are recruited and extravasate into the plug.

By performing, in parallel, microbubbles contrast-enhanced US imaging and fibered confocal endomicroscopy imaging, we can conclude that a pool of factors secreted by fast-growing angiogenic tumors generating cells, without the cancer cells themselves, can not only recruit blood vessels, but also form functional vasculature with EPR typical characteristics. Moreover, this method allows the separation between the impact of the secreted factors and cell-to-cell interaction in tumor microenvironment.

This method can be adjusted for different experimental systems and applications. For example, it can be used to assess anti-angiogenic drugs by loading C.M. from pre- and post-treated cells. Also, other cell lines may be used under these experiment settings. However, calibration is required in order to apply the optimal C.M. concentration. Moreover, the ideal time point for imaging should be optimized according to each model system.