Human disease specific neuronal cultures are essential for generating in vitro models for human neurological diseases. However, the lack of access to primary human adult neural cultures raises unique challenges. Recent developments in induced pluripotent stem cells (iPSC) provides an alternative approach to derive neural cultures from skin fibroblasts through patient specific iPSC, but this process is labor intensive, requires special expertise and large amounts of resources, and can take several months. This prevents the wide application of this technology to the study of neurological diseases. To overcome some of these issues, we have developed a method to derive neural stem cells directly from human adult peripheral blood, bypassing the iPSC derivation process. Hematopoietic progenitor cells enriched from human adult peripheral blood were cultured in vitro and transfected with Sendai virus vectors containing transcriptional factors Sox2, Oct3/4, Klf4, and c-Myc. The transfection results in morphological changes in the cells which are further selected by using human neural progenitor medium containing basic fibroblast growth factor (bFGF) and vascular endothelial growth factor (VEGF). The resulting cells are characterized by the expression for neural stem cell markers, such as nestin and SOX2. These neural stem cells could be further differentiated to neurons, astroglia and oligodendrocytes in specified differentiation media. Using easily accessible human peripheral blood samples, this method could be used to derive neural stem cells for further differentiation to neural cells for in vitro modeling of neurological disorders and may advance studies related to the pathogenesis and treatment of those diseases.

In vitro neuronal cultures have been used as a fundamental tool for studies of neurological diseases. Primary animal (mostly rodent) neural cultures1,2 and human neural cell lines derived from gliomas or other tumors are the most commonly used in such studies. However, it has been recognized that there are significant differences between rodent and human cells. Many findings based on rodents cannot be translated to humans. Furthermore, with the rapid developments in analyzing mass genomic information and the relatively easy gene editing and whole genome sequencing, the trend is more and more geared to discovering disease prone genes and delineating their functions and roles in specific diseases, which makes the few human neuronal cell lines have only limited usage. Theoretically, human primary neural cultures derived from samples of patient nervous system are the best choice but they are impossible to obtain; hence alternative methods are necessary. In recent years, some approaches have been pursued, with two being the most distinguishable. Following the development of the technique of generating induced pluripotent stem cells (iPSC) using mouse and human somatic cells3,4, neural cells could be further differentiated from them5-7. However, generating and characterizing iPSC demands intensive labor, techniques, and time input, sometimes even prohibitively. Shortly after, another approach was developed to directly transform neuronal cells from somatic cells8,9. As the resulting neurons are non-proliferative, it limits its application in intensive studies and drug screening, which requires a large amount of cells. To take advantages of both techniques, direct derivation of neural stem/progenitor cells from somatic cells has been explored by several groups10-12, which bypasses the tedious process of iPSC generation and characterization but still provides a decent number of neural stem cells for later neural differentiation. We have previously shown that following the introduction of the Yamanaka transcription factors into hematopoietic progenitor cells, neural stem cells could be directly generated using a neural progenitor cell selecting medium13. Here, we report the method in detail.

The quality of CD34 cells is critical for the success of neural stem cell transduction. High quality CD34 cells proliferate during the first couple of days of culture and appear as non adherent, homogenously round cells, floating just above the bottom of culture vessels (Figure 1A). The successful infection results in cell aggregates, which expands over time (Figure 1B), while non specific cell aggregates may occur during cell culture, that expand and the associations are loose. Adherent cells usually appear around three to five days after transfection; they are mostly bipolar and will proliferate to make monolayers (Figure 1C). After a selection with neural progenitor cell medium most of the adherent cells are nestin and SOX2 positive but OCT4 negative (Figure 2). The induced neural stem cells can be further differentiated to neurons and glia (Figure 3). 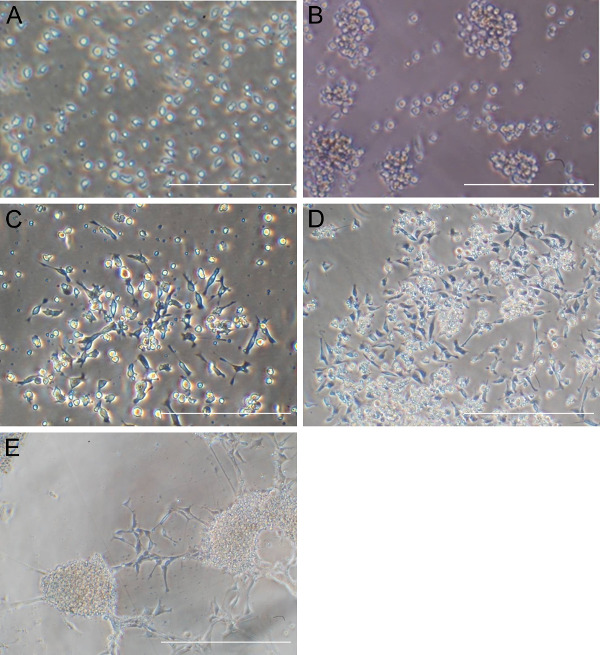 Figure 1. Morphological changes of CD34 cells after Sendai virus transfection. (A) Significant number of CD34 cells can be observed at the time of transfection. (B) Sphere like cell aggregates can be observed 24 hr after Sendai virus transfection which expands during time. (C) Mostly bipolar adherent cells appeared after 5 days of transfection. (D and E) Typical morphologies of neural stem cells are shown after induction with neural progenitor medium and expansion. Scale bar: 200 µm for (A) and (B), 400 µm for the others. Please click here to view a larger version of this figure. 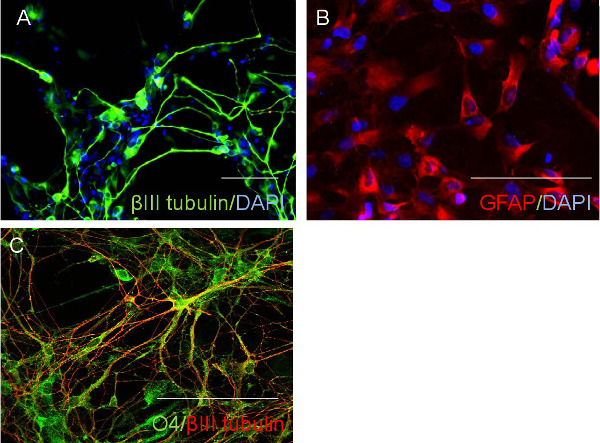 Compared to fibroblast cells, human peripheral blood is more accessible. Using the presented protocol, more than 1 x 105 hematopoietic progenitor cells, or CD34 positive cells, can be enriched from 10 ml of whole blood. Although contamination with platelets is usually not preventable, it can be easily reduced by lower speed centrifugation and it does not interfere with neural stem cell generation. However, the quality and number of CD34 cells will determine the final production of neural stem cells. The quality of CD34 cells can be roughly judged by their response to CD34 culture medium. A positive response, meaning rapid proliferation of CD34 cells in the medium, is critical for the later successful transformation. If CD34 cells failed to proliferate, or even undergo significant cell loss, then the transformation will become difficult, resulting in less proliferative cells. Thus it is suggested to only start transformation with good quality CD34 cells. Although 1 x 105 CD34 cells are enough for an experienced researcher, 3 x 105 cells may be used for starters.

Using Sendai virus provides a non-integration, highly efficient and convenient way to introduce transcriptional factors into the targeting cells14,15. Originally used for generating iPSC, Yamanaka factors were also successfully used to generate neural stem cells directly from fibroblasts11. In a previous report using the presented protocol, Sendai virus containing Yamanaka factors could also be used to generate neural stem cells from cord blood or adult peripheral hematopoietic blood cells. Compared with using skin biopsy for culturing fibroblasts, blood is more accessible and convenient to get. Besides, it is reported that hematopoietic progenitor cells also express certain neural specific markers16, making it a better choice for generating neural stem cells. In fact, after Sendai virus infection, most of the attached monolayer cells expressed nestin, a neural stem cell marker, except the more aggregated compact colonies, some of which may give rise to iPSC at a later time point. Thus the attached monolayer of cells are collected and further incubated in neural progenitor cell medium, which has been widely used in primary neural progenitor cell culture, to facilitate the neural stem cell fate of the cells.

As a summary, this protocol used Sendai virus containing Yamanaka factors to directly derive human neural stem cells within 3 - 4 weeks from adult hematopoietic progenitor cells obtained from accessible peripheral blood samples. The neural stem cells could be further differentiated to neurons and glia. This method bypasses the lengthy and complicated iPSC generation processes currently used and may be used for in vitro cell culture modeling for various neurological disorders, which may better represent the genetic differences in specific disorders, especially from individual patient samples.

The study is funded by NIH intramural funds.