Human pluripotent stem cells (hPSCs) represent a platform to study human development in vitro under both normal and disease conditions. Researchers can direct the differentiation of hPSCs into the cell type of interest by manipulating the culture conditions to recapitulate signals seen during development. One such cell type is the melanocyte, a pigment-producing cell of neural crest (NC) origin responsible for protecting the skin against UV irradiation. This protocol presents an extension of a currently available in vitro Neural Crest differentiation protocol from hPSCs to further differentiate NC into fully pigmented melanocytes. Melanocyte precursors can be enriched from the Neural Crest protocol via a timed exposure to activators of WNT, BMP, and EDN3 signaling under dual-SMAD-inhibition conditions. The resultant melanocyte precursors are then purified and matured into fully pigmented melanocytes by culture in a selective medium. The resultant melanocytes are fully pigmented and stain appropriately for proteins characteristic of mature melanocytes.

The neural crest cells emerge from the roof plate of the neural tube, opposite the notochord, and undergo an epithelial to mesenchymal transition before migrating away to give rise to a diverse population of differentiated cells. The fates of the crest cells are defined in part by the anatomic location of the roof plate along the body axis of the embryo. Neural crest cell derivatives include lineages characteristic of both mesoderm (smooth muscle cells, osteoblasts, adipocytes, chondrocytes) and ectoderm cells (melanocytes, Schwann cells, neurons) 14. Neural crest stem cells upregulate the transcription factor SOX10 and can be isolated by fluorescence-activated cell sorting with antibodies to p75 and HNK1.

The neural crest cells fated to become melanocytes pass through a melanoblast stage and upregulate KIT and MITF (microphthalmia-associated transcription factor) 6,21 MITF is a master regulator of melanocyte development and is a transcription factor responsible for controlling much of melanocyte development 22-24. Human melanoblasts migrate to the basal layer of the epidermis where they reside either in the hair bulge or surrounded by keratinocytes in the epidermis (forming pigmentation units) to serve as precursors to the mature, pigmented melanocytes. The differentiation and maturation of melanoblasts into pigmented melanocytes occurs concomitant with colonization of the hair bulb and expression of the melanin production pathway (TYRP1, TYR, OCA2 and PMEL) 25,26.

Isolating human melanocytes and melanoblasts from patients is expensive, difficult and limiting in quantity. This protocol enables researchers to differentiate hPSCs (induced or embryonic) into melanocytes or melanocyte precursors in a well defined, rapid, reproducible, scalable, and inexpensive method without cell sorting. The protocol was used previously to identify disease-specific defects when differentiating iPSCs from patients with pigmentation disorders .

1. Preparation of Culture Medium, Coated Dishes and Maintenance of hPSCs

2. Plating of hPSCs for Differentiation

Note: The differentiation should be initiated (day 0) when the hPSCs are 80% confluent. The cells can be fed daily with hESC-medium containing 10 µM Y-27632 dihydrochloride until beginning the differentiation.

4. Replating in Droplets for NC Specification

This protocol provides a method for deriving fully pigmented, mature melanocytes from hPSCs in an in vitro feeder-free, cost efficient, and reproducible manner. In contrast to the previously established Fang et al. protocol for hPSC-derived melanocytes, the outlined protocol does not require conditioned medium and decreases the time requirement. The Fang et al. protocol utilized conditioned medium from a WNT3A-producing murine cell line and took up to 6 weeks to visualize pigmentation 6,12. To bias the neural crest stem cells towards a melanocyte fate (melanoblasts), we remove the BMP and TGFβ inhibitors (LDN and SB respectively) after an early pulse and subsequently introduce exogenous BMP4 and EDN3 signaling at day six while maintaining Wnt activation (CHIR) 6. The resulting melanoblasts can be characterized by expression of KIT and MITF, as well as maintenance of SOX10 expression 6. Expression of SOX10 can be visualized in areas in the culture dish that form ridges by day 11 culture (Figure 1B-C).

Following melanoblast induction, the cells are passaged onto PO/LAM/FN plates and fed with Full Melanocyte medium. This is an extremely rich medium that has the additional benefit of being selective for the melanocyte population, eliminating the need for any Fluorescent-Activated Cell Sorting 6. During melanocyte maturation, the cell upregulates the melanin synthesis genes TYR and TYRP1 while maintaining many of the melanoblast genes, including TYRP2. Day25 stem cell derived melanocytes stain appropriately for the melanin production proteins TYRP1 and TYRP2 (Figure 2). This protocol is robust and has been used with the h9 hESC line and across several iPSC lines. Most recently, this protocol was used to faithfully reproduce the ultrastructural features of pigmentation diseases using patient-specific iPSC lines 6. 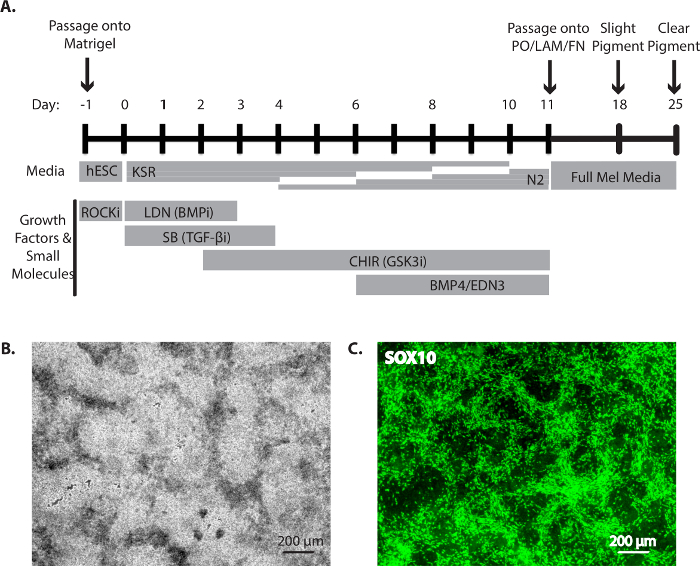 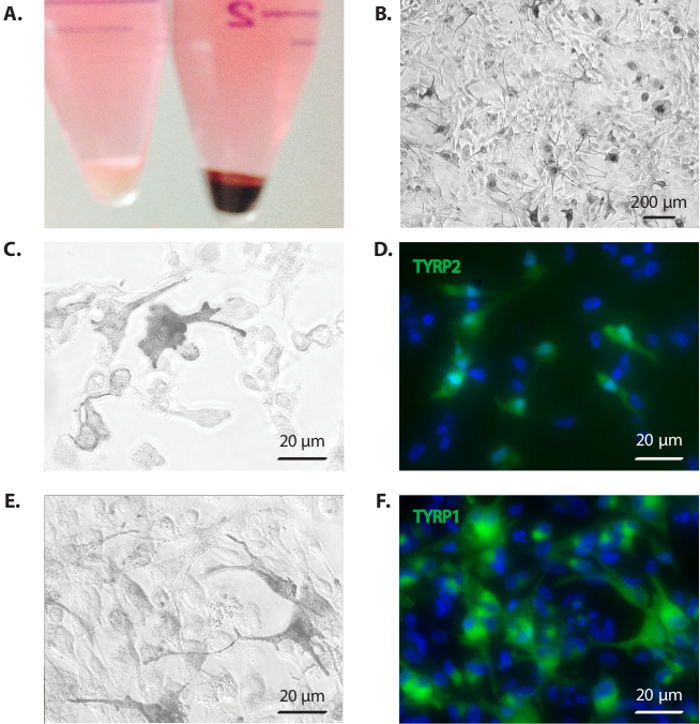 For the successful differentiation of melanocytes from hPSCs the following suggestions should be taken into consideration. First and foremost, it is essential to work under sterile culture conditions at all times. Additionally, it is important to start with pluripotent, fully undifferentiated hPSCs; if the starting population contains differentiated cells the yield will invariably drop as the contaminants cannot be directed towards melanocytes and may even further disrupt the properly differentiating cells.

To ensure the cells remain pluripotent take care to adhere to the well-established rules for stem cell maintenance; feed and passage regularly and groom the cultures to remove differentiated cells before passaging. When passaging onto gelatinous protein for differentiation it is important that the dish is properly coated to prevent cells from lifting off during the differentiation.

The Melanoblast differentiation should be initiated around 80% cell density; too high densities will lead to increased cell death while too low densities will negatively affect differentiation. When passaging, the cells should be washed twice to remove any cell detachment solution before plating. To maximize survival on day 11, it is important to passage the cells into high-density, well-spaced droplets that are untouched for 20 min, so that the cells cluster and adhere.

This protocol is effective in generating a large numbers of melanocytes, and will be valuable when studying human patient samples of limited quantity. Furthermore, as the PSC-derived melanocyte population is selective and expandable the melanocyte population can be multiplied to very large numbers of cells even if the differentiation yields low numbers or percentages of melanocytes. Initiating the protocol with iPSCs opens up the possibility for studying developmental diseases and patient specific samples. One limitation of this protocol is the fact the melanocytes are derived as a monoculture without all other cell types present that form their normal niche in vivo. Furthermore the protocol requires expertise in hPSC culture and differentiation techniques. However, with recent developments in the iPSC field producing hPSCs has become increasingly manageable and methods for culturing hPSCs have become routine. To date, the protocol has been utilized in our lab to produce melanocytes from the h9 hES line, as well as from 14 iPS lines generated from 5 different donors.

Mica et al. used this protocol successfully for the derivation of melanocytes from human hESC and iPSCs 6. The paper demonstrated that iPSCs derived from patients with pigmentation defects could be differentiated into melanocytes and the protocol faithfully produced melanosomes of the phenotypic size and quantity associated with the disease.

The work illustrated one of many possible applications for the protocol with the use of iPSC-derived melanocytes for studying disease mechanisms and introduced the possibility of scaling up production for drug screening 6,29. Importantly, the paper demonstrated the robustness and reproducibility of the protocol to produce melanocytes from a large set of genetically distinct hiPSC lines.

The authors have no conflicting interests to disclose.

This work was supported by a fellowship for melanoma researchers from the Joanna M. Nicolay Foundation and by the National Institutes of Health under Ruth L. Kirschstein National Research Service Award F31. This work was further supported through grants from NYSTEM and the Tri-institutional stem cell initiative (Starr Foundation).