We describe a detailed protocol for the isolation of tumor-initiating cells from human sarcoma patient-derived xenografts by fluorescence-activated cell sorting, using human leukocyte antigen-1 (HLA-1) as a negative marker, and for the further validation and characterization of these HLA-1-negative tumor-initiating cells.

The existence and importance of tumor-initiating cells (TICs) have been supported by increasing evidence during the past decade. These TICs have been shown to be responsible for tumor initiation, metastasis, and drug resistance. Therefore, it is important to develop specific TIC-targeting therapy in addition to current chemotherapy strategies, which mostly focus on the bulk of non-TICs. In order to further understand the mechanism behind the malignancy of TICs, we describe a method to isolate and to characterize TICs in human sarcomas. Herein, we show a detailed protocol to generate patient-derived xenografts (PDXs) of human sarcomas and to isolate TICs by fluorescence-activated cell sorting (FACS) using human leukocyte antigen class I (HLA-1) as a negative marker. Also, we describe how to functionally characterize these TICs, including a sphere formation assay and a tumor formation assay, and to induce differentiation along mesenchymal pathways. The isolation and characterization of PDX TICs provide clues for the discovery of potential targeting therapy reagents. Moreover, increasing evidence suggests that this protocol may be further extended to isolate and characterize TICs from other types of human cancers.

Intratumoral cellular heterogeneity of human cancers has been supported by increasing evidence during the past decade1. Similar to normal tissue, cancer tissue consists of a small subpopulation of TICs (also called cancer stem cells), which exhibit tumor-forming ability; meanwhile, the bulk of cancer cells exhibit differentiated phenotypes2. These TICs show stem cell-like properties, including the expression of a stem cell marker and the ability of both self-renewal and asymmetric cell division, and thus, can initiate the formation of a cellular heterogeneous tumor3. Recent studies have revealed that TICs are not only responsible for tumor initiation but are also associated with tumor aggressiveness4, metastasis5, and drug resistance6. Therefore, it is important to understand the biology of TICs and, thus, develop a specific treatment strategy targeting these TICs.

FACS-based methods have been used to identify TICs using TICs markers, including CD133, CD24, and CD441. Most of these markers are also expressed in normal stem cells7. However, none of these markers solely mark TICs. The roles these molecules play in the malignancy of TICs are still not clear. For example, CD133 can be frequently inactivated by DNA methylation, and thus, this intertumoral heterogeneity may render the accuracy of these markers8. ALDH1 is a marker that also functions to maintain the stemness of TICs9. It seems to be more effective in identifying breast cancer TICs but is still questionable in other tumor types9. Some signaling pathways play important roles in stem cell biology, including Wnt (wingless-related integration site), TGF-β (transforming growth factor beta), and Hedgehog1. But it is difficult to prove that these pathways are TIC-specific and to use the activity of these pathways to isolate TICs from primary tumors. Thus, a reliable novel TIC marker is urgently needed.

Human MHC class I, also called HLA-1, is a cell surface protein expressed in almost all nucleated cells10. HLA-1 functions as an antigen presenting a molecule that is specifically recognized by CD8 T cells10. The cytotoxic effect of CD8 T cells can be activated when cancer cells present a tumor antigen by HLA-1. Therefore, lacking HLA-1 on the cell surface of the cancer cells can lead to an immune escape from the cytotoxic CD8 T cells. The downregulation of HLA-1 has been described in different types of human cancer and is correlated with poor prognosis, metastasis, and drug resistance11. We have shown that the loss of HLA-1 expression on the cell surface can be used to identify TICs in sarcomas, as well as in prostate cancer6,12.

Here, we describe a detailed protocol to isolate TICs from human sarcoma PDXs by FACS, using HLA-1 as a negative marker, and to further validate and characterize these HLA-1-negative TICs.

All protocols for mouse experiments discussed here were in accordance with institutional guidelines and approved by the Mount Sinai Medical Center Institutional Human Research Ethics Committee and Animal Care and Use Committee.

1. Processing of the Sarcoma Tissue Sample, and PDX Formation

2. Isolation of Tumor-initiating Cells by FACS from the PDX

A human sarcoma PDX was generated and stained. Intratumoral heterogeneity was shown by immunohistochemistry using HLA-1 antibody. The xenograft consisted of two distinct subpopulations, namely HLA-1 positive and negative (Figure 1A)12. The sarcoma PDX showed histological similarities with the parental primary tumor (Figure 1A). Sarcoma PDX TICs were isolated by FACS. Using a double sorting method, the HLA-1-negative cells were highly enriched from the parental cell population (Figure 1B)12.

We performed a gene expression analysis of the isolated HLA-1-negative TICs12. Genes associated with normal mesenchymal cell differentiation were elevated in TICs12. Thus, we also tested whether HLA-1 TICs can be induced to terminal differentiation and result in a decreased tumor formation ability. The results showed that HLA-1-negative cells can be induced to differentiate along both lipogenic and osteogenic pathways and show strong Oil Red O and Alizarin Red S staining (Figure 1G). In contrast, HLA-1-positive cells do not differentiate under the same conditions. Thus, these results indicate a promising differentiated therapy strategy that may be used to target sarcoma TICs. 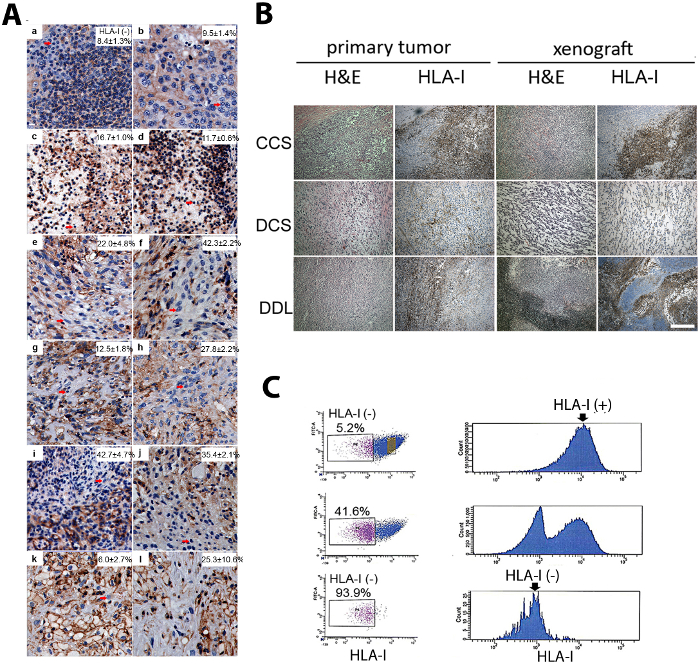 Figure 1: Isolation of HLA-1-negative cells from intratumoral heterogeneous sarcoma PDXs. (A) HLA-1-negative cells (arrows) were found in different subtypes of human sarcomas by immunohistochemistry (IHC). (a and b) Clear cell sarcoma. (c and d) Pleomorphic liposarcoma. (e and f) Leiomyosarcoma. (g and h) Malignant peripheral nerve sheath tumor. (i and j) Liposarcoma, not otherwise specified. (k and l) Dedifferentiated liposarcoma. Scale bar = 100 µm. (B) Sarcoma PDXs were histologically similar to the parental tumor (hematoxylin and eosin [H&E] stain) and showed cellular heterogeneity in the HLA-1 expression by IHC. Here are shown representative pictures of sarcoma PDXs, including a clear cell sarcoma (CCS), a dedifferentiated chondrosarcoma (DCS), and a dedifferentiated liposarcoma (DDL). Scale bar = 100 µm. (C) The subpopulation of HLA-1-negative cells was isolated by flow cytometry with a double-sort method. From top to bottom: first sort, second sort, and purity check. Isolated HLA-1-negative and HLA-1-positive cells were subjected to a subsequent functional analysis, including a tumor formation assay. The results from this figure are from a previous publication12. Please click here to view a larger version of this figure. 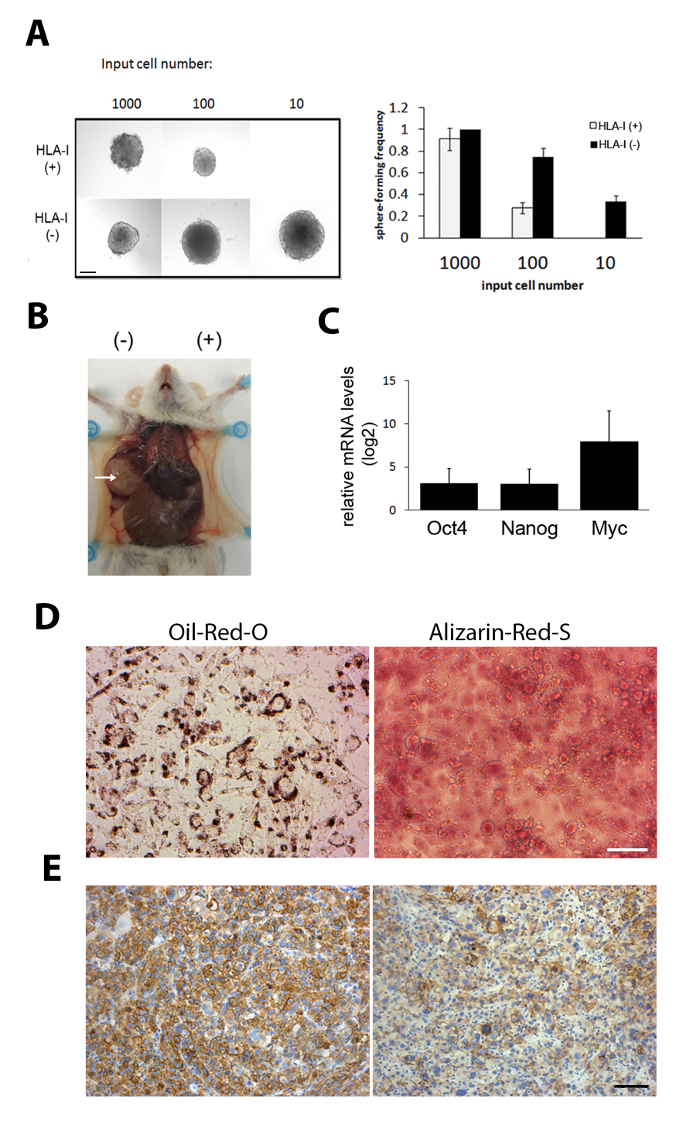 Figure 2: Characterization of HLA-1-negative TICs by functional assays. (A) A sphere formation assay showed that as few as 10 HLA-1-negative cells were able to form sarcoma spheres. Left: representative pictures of sarcoma spheres. Right: sphere-forming frequency; mean ± SD. Scale bar = 100 µm. (B) HLA-1-negative cells isolated from the sarcoma PDX were highly tumorigenic. Here shown are representative pictures of the tumor formed by HLA-1-negative and -positive cells from DDL. A thousand cells of HLA-1-negative and HLA-1-positive DDL cells were injected in separate flanks of the same mouse. (C) The mRNA levels of stem cell genes Oct4, Nanog, and Myc were expressed at higher levels in HLA-1-negative cells compared to HLA-1-positive cells. The data represent the mean ± SD (n = 5). (D) Strong positive staining of Oil Red O and Alizarin Red S shows a terminal differentiation along lipogenic and osteogenic pathways that are induced from sarcoma TICs. (E) HLA-1 immunostaining of PDXs formed by HLA-1-positive (left) and -negative (right) subpopulations. Scale bar = 100 µm. The results from this figure are from a previous publication12. Please click here to view a larger version of this figure.

However, the protocol presented here also has limitations. Previous data showed that HLA-1 expression is epigenetically regulated, which is consistent with the observation of HLA-1 expression's cellular heterogeneity within the same tumor12. HLA-1 genomic mutations were detected in sarcomas and other cancer types. Mutations in HLA-1 genes may lead to the complete loss of HLA-1 on the cell surface in the whole tumor or to expressing nonfunctional mutated HLA-1. In either case, HLA-1 negativity cannot be used to identify TICs within the tumor.

Using HLA-1 as a negative marker, we have successfully isolated TICs from a variety of human sarcoma subtypes and validated our results by functional analysis. Thus, we were able to perform molecular studies including gene expression analysis on the TICs, in order to develop specific treatment targeting these TICs.