Dopamine is distinctly regulated in the midbrain nuclei, which contain the cell bodies and dendrites of the dopamine neurons. Here we describe a dissection and sample-handling approach to maximize results, and thus conclusions and insights, on dopamine regulation in the midbrain nuclei of the substantia nigra (SN) and ventral tegmental area (VTA) in rodents.

Dopamine is a vigorously studied neurotransmitter in the CNS. Indeed, its involvement in locomotor activity and reward-related behaviour has fostered five decades of inquiry into the molecular deficiencies associated with dopamine regulation. The majority of these inquiries of dopamine regulation in the brain focus upon the molecular basis for its regulation in the terminal field regions of the nigrostriatal and mesoaccumbens pathways; striatum and nucleus accumbens. Furthermore, such studies have concentrated on analysis of dopamine tissue content with normalization to only wet tissue weight. Investigation of the proteins that regulate dopamine, such as tyrosine hydroxylase (TH) protein, TH phosphorylation, dopamine transporter (DAT), and vesicular monoamine transporter 2 (VMAT2) protein often do not include analysis of dopamine tissue content in the same sample. The ability to analyze both dopamine tissue content and its regulating proteins (including post-translational modifications) not only gives inherent power to interpreting the relationship of dopamine with the protein level and function of TH, DAT, or VMAT2, but also extends sample economy. This translates into less cost, and yet produces insights into the molecular regulation of dopamine in virtually any paradigm of the investigators' choice.

We focus the analyses in the midbrain. Although the SN and VTA are typically neglected in most studies of dopamine regulation, these nuclei are easily dissected with practice. A comprehensive readout of dopamine tissue content and TH, DAT, or VMAT2 can be conducted. There is burgeoning literature on the impact of dopamine function in the SN and VTA on behavior, and the impingements of exogenous substances or disease processes therein 1-5. Furthermore, compounds such as growth factors have a profound effect on dopamine and dopamine-regulating proteins, to a comparatively greater extent in the SN or VTA 6-8. Therefore, this methodology is presented for reference to laboratories that want to extend their inquiries on how specific treatments modulate behaviour and dopamine regulation. Here, a multi-step method is presented for the analyses of dopamine tissue content, the protein levels of TH, DAT, or VMAT2, and TH phosphorylation from the substantia nigra and VTA from rodent midbrain. The analysis of TH phosphorylation can yield significant insights into not only how TH activity is regulated, but also the signaling cascades affected in the somatodendritic nuclei in a given paradigm.

We will illustrate the dissection technique to segregate these two nuclei and the sample processing of dissected tissue that produces a profile revealing molecular mechanisms of dopamine regulation in vivo, specific for each nuclei (Figure 1).

For complete information on the HPLC equipment and maintenance, refer to HPLC analysis at the end of the manuscript. 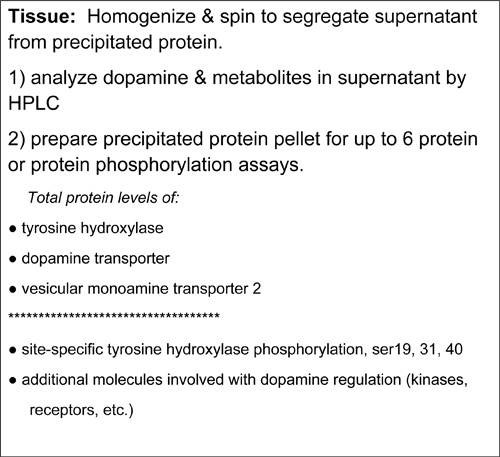 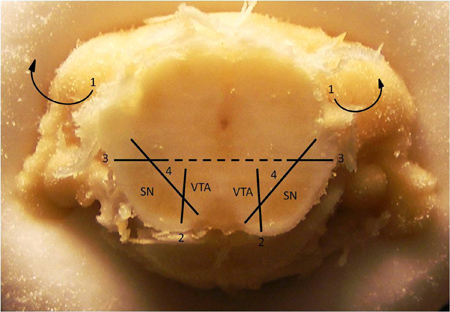 Figure 2. Dissection Technique for isolating the midbrain dopaminergic neuropil. Technique for dissecting substantia nigra (SN) from ventral tegmental area (VTA). 1. Remove overlying cortex and hippocampus (these structures have already been removed in the above image). 2. Make a vertical cut separating the pigmented area of the SN from the VTA. 3. Make a horizontal cut at or near the midline just above the dorsal and lateral most part of the SN. 4. Tease the SN away from the rest of the brainstem. Once SN has been removed, similarly tease the VTA away from the rest of the midbrain. Note: this section is typically observed at coordinates, relative to Bregma, at AP 5.7. 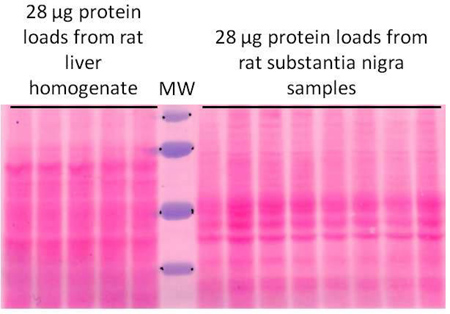 Figure 3. second (and final) normalization of total protein load-Ponceau S staining for Image J analysis. Ponceau S protein staining of a total TH determination in rat substantia nigra samples. The first five lanes form the left are the standard total TH curve, to which 28 μg protein from rat liver homogenate was added to mirror the protein load from the substantia nigra samples. The next lane contains molecular weight (MW) markers. The remaining lanes contain ~28μg protein from rat substantia nigra samples. The protein loads are based on the protein concentration of each sample as determined by the BCA method. However, despite what should be equal loads, there are variations in the darkness of Ponceau S staining between the samples indicating a slight variability in protein concentrations, which is corrected for by normalization using ImageJ analysis to analyze the amount of Ponceau S staining for each sample. 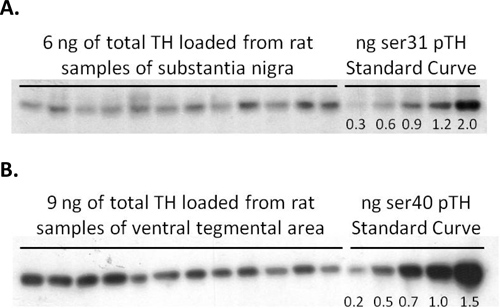 As outlined in Figure 1, the methods detailed above should yield multiple readouts of dopamine and its regulating proteins TH, DAT, and VMAT2 from one sample of SN or VTA obtained from either the rat or mouse. Again, the benefits of carrying out this protocol are that the investigator can obtain operationally-matched readouts of how dopamine is regulated in vivo under virtually any experimental paradigm and, in doing so, save significant experimental resources by reducing the number of animals required in any experiment.

It is absolutely imperative that the investigator observe temperature requirements imposed during the dissection (4° C), storage of tissue (at least -70° C), tissue sonication (immediate sonication after removal from storage temperature) in ice-cold HPLC buffer and subsequent pellet formation and processing. Once the pellet is sonicated and boiled in SDS solution, the samples may continue to be further processed at room temperature. Storage of archived HPLC analyzed sample and the sample buffer prepared samples for protein analysis should be at -80° C.

Again, the major advantage of the protocol is the innate approach to operationally-match results pertaining to dopamine regulation in vivo. Furthermore, normalizing dopamine tissue readouts to markers of dopaminergic neuropil (TH, DAT) provide a large measure of assurance that the investigator is dissecting SN or VTA with consistency and accuracy. Given the involvement of dopamine in the addiction, psychiatric disorder, and locomotor arenas, this protocol could be employed in many experiments. One notable limitation is that the interpretation of TH phosphorylation results should be conservative, as it is not known at this time the extent to which an increase in phosphorylation at ser31 or ser40 is required in vivo to increase L-DOPA biosynthesis. However, as mentioned, there is evidence that ser31 phosphorylation appears to regulate L-DOPA biosynthesis and has a role in regulating total dopamine tissue content in the CNS 2,10. At this time, standards for TH protein and TH phosphorylation are not commercially available. However, this laboratory has maintained and expanded such standards based upon those used when the first paper on TH phosphorylation regulation in vivo was published 11. Still, it is possible to normalize dopamine tissue content to recovered TH protein in these discrete regions using this protocol.

Funding for the this work, and as cited 2,10, was provided, in part, by a research grant awards to MF Salvatore from the American Federation for Aging Research, The Edward P. Stiles Trust Fund and Biomedical Research Foundation of Northwest Louisiana, and to BS Pruett from the Ike Muslow Predoctoral Fellowship, LSU Health Sciences Center-Shreveport. 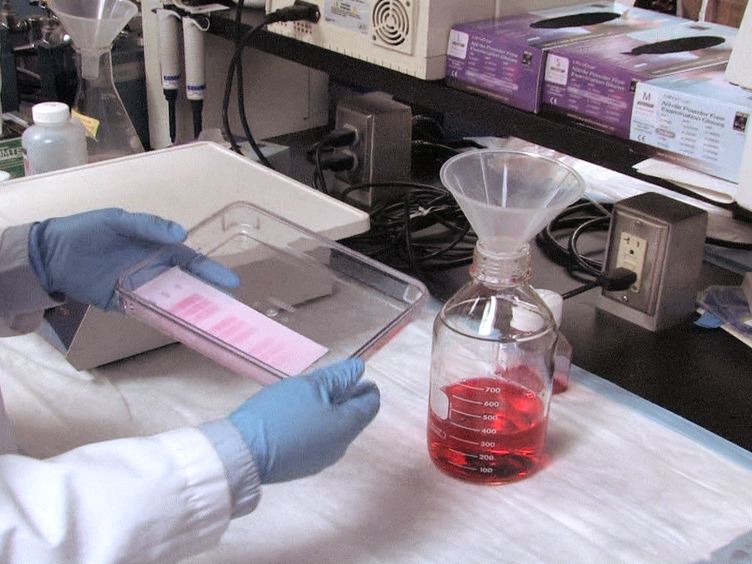