A rapid way to screen for melanoma modifiers using a zebrafish autochthonous tumor model is presented. It takes advantage of the miniCoopR vector which allows for expression of candidate melanoma genes in melanocytes. A method to obtain melanoma-free survival curves, an invasion assay, a protocol for antibody staining of scale melanocytes and a melanoma transplantation assay are described.

Genomic studies of human cancers have yielded a wealth of information about genes that are altered in tumors1,2,3. A challenge arising from these studies is that many genes are altered, and it can be difficult to distinguish genetic alterations that drove tumorigenesis from that those arose incidentally during transformation. To draw this distinction it is beneficial to have an assay that can quantitatively measure the effect of an altered gene on tumor initiation and other processes that enable tumors to persist and disseminate. Here we present a rapid means to screen large numbers of candidate melanoma modifiers in zebrafish using an autochthonous tumor model4 that encompasses steps required for melanoma initiation and maintenance. A key reagent in this assay is the miniCoopR vector, which couples a wild-type copy of the mitfa melanocyte specification factor to a Gateway recombination cassette into which candidate melanoma genes can be recombined5. The miniCoopR vector has a mitfa rescuing minigene which contains the promoter, open reading frame and 3'-untranslated region of the wild-type mitfa gene. It allows us to make constructs using full-length open reading frames of candidate melanoma modifiers. These individual clones can then be injected into single cell Tg(mitfa:BRAFV600E);p53(lf);mitfa(lf)zebrafish embryos. The miniCoopR vector gets integrated by Tol2-mediated transgenesis6 and rescues melanocytes. Because they are physically coupled to the mitfa rescuing minigene, candidate genes are expressed in rescued melanocytes, some of which will transform and develop into tumors. The effect of a candidate gene on melanoma initiation and melanoma cell properties can be measured using melanoma-free survival curves, invasion assays, antibody staining and transplantation assays.

One-cell Tg(mitfa:BRAFV600E);p53(lf);mitfa(lf)zebrafish embryos were injected with the miniCoopR vector containing the melanoma oncogene SETDB15 or EGFP, each under the control of the mitfa promoter. Embryos with melanocyte rescue were selected and allowed to mature. At 2 months of age animals with melanocyte rescue greater than 4 mm2 were selected. The animals were screened weekly for melanomas. Tumor incidence curves for the adults showed that the SETDB1 oncogene significantly accelerated melanoma onsetas compared to the EGFP control (Figure 1). Animals which developed tumors between the posterior boundary of the hindbrain and the anterior border of the dorsal fin (Figure 2A) were isolated. Two weeks after melanoma onset they were fixed in 4% paraformaldehyde, sectioned and stained with hematoxylin and eosin to assess melanoma invasion into underlying tissues. Melanomas expressing SETDB1 were more locally invasive than EGFPcontrol melanomas (Figure 2C). In order to look for expression of a candidate gene, dorsal scales were plucked from a wild-type zebrafish and stained using a 1:100 dilution of a primary antibody that recognizes the Mitfa transcription factor followed by a 1:1,000 dilution of FITC goat anti-rabbit IgG antibody (Figure 3). To assess transplantability of the tumor, melanoma cells were isolated from a Tg(mitfa:BRAFV600E);p53(lf); mitfa(lf)fish injected with miniCoopR-EGFP. 50,000 cells were subcutaneously injected into a recipient casper mutant that had been irradiated the day before with 25 Gy. By 2 weeks of age, pigmented donor-derived cells were easily recognized (Figure 4). 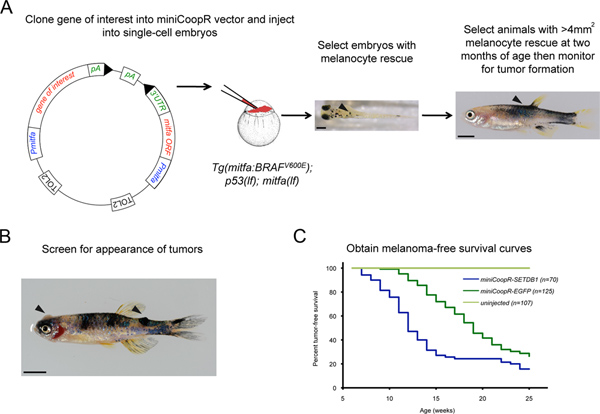 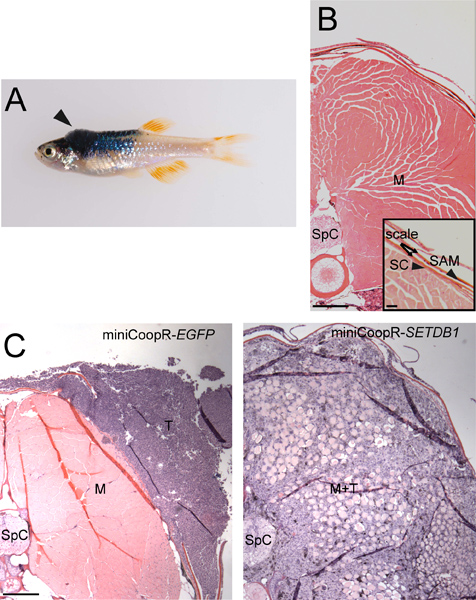 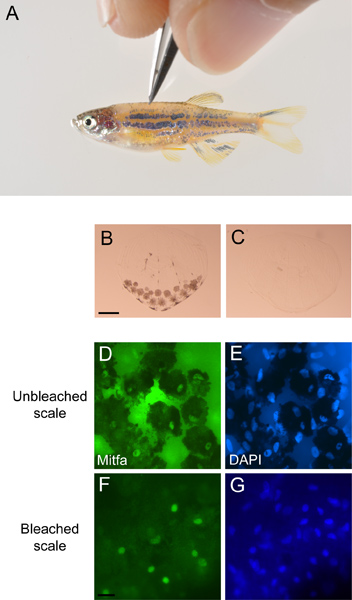 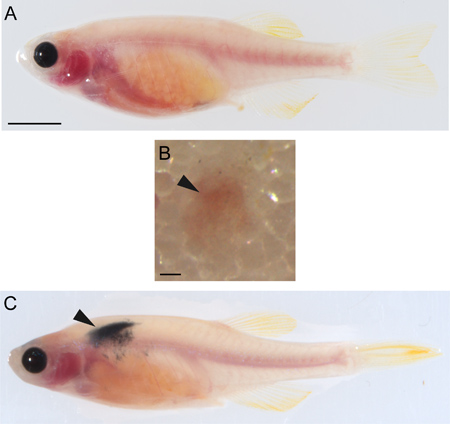 The miniCoopR method enables expression of genes of interest in zebrafish melanocytes. This approach takes advantage of the fact that the zebrafish mitfa gene acts cell-autonomously. For this reason, melanocytes rescued by the miniCoopR vector are certain to contain the minigene and any gene of interest to which it is physically coupled. Rescued melanocytes are clearly visible and can be obtained in animals that were injected as single-cell embryos. A specified degree of chimerism is selected, and animals surpassing this cutoff can be scored for tumor onset or other characteristics. A major benefit of the miniCoopR method is that animals with sufficient chimerism can be readily identified and scored without having to obtain stable transgenic lines corresponding to every gene of interest tested. Time, effort and expense are saved in proportion to the number of genes of interest to be surveyed.

As reported previously5, miniCoopR-based methodology allowed us to screen many candidate oncogenes present in regions of chromosome 1 that is recurrently amplified in human melanomas. Other chromosomal intervals can be screened in a similar fashion. In addition, this approach can be used to express any gene in melanocytes, and any characteristic of these cells can be monitored. Even more broadly, the principle of coupling a gene of interest to a rescuing minigene can be applied to other tissue types. For such applications, a tissue-specific genetic mutant and a corresponding cell-autonomously acting rescuing gene are required. Mutant and gene pairs for other tissue types exist in zebrafish and other species, opening the possibility of rapid functional assays in a broader spectrum of tissue types.

We thank Dr. Leonard I. Zon in whose laboratory these techniques were initially developed; Kristen Kwan and the late Chi-Bin Chien for gifts of plasmids used in this work; James Lister and David Raible for assistance with antibody staining; and James Neiswender for the microinjection video. This work was funded by NIH grant R00AR056899-03 to C.J.C. 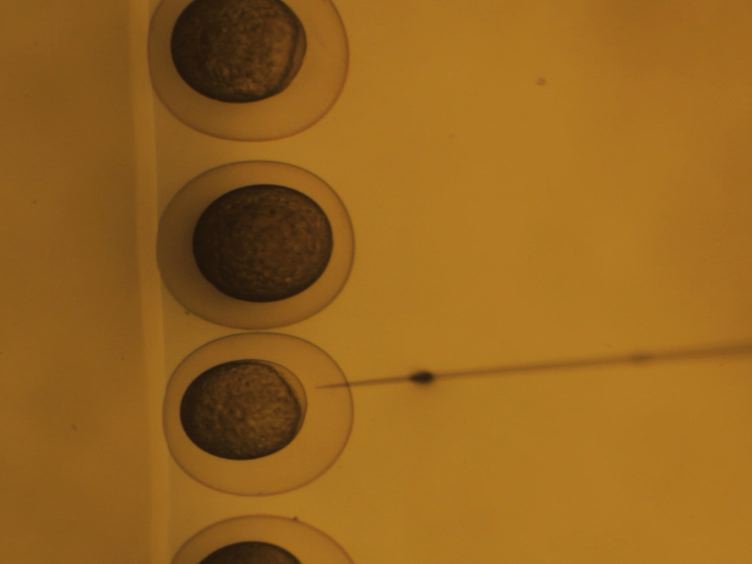