In this video, we will demonstrate how to record electrical activity from identified single neurons in a whole brain preparation, which preserves complex neural circuits. We use transgenic fish in which gonadotropin-releasing hormone (GnRH) neurons are genetically tagged with a fluorescent protein for identification in the intact brain preparation.

Understanding the cell physiology of neural circuits that regulate complex behaviors is greatly enhanced by using model systems in which this work can be performed in an intact brain preparation where the neural circuitry of the CNS remains intact. We use transgenic fish in which gonadotropin-releasing hormone (GnRH) neurons are genetically tagged with green fluorescent protein for identification in the intact brain. Fish have multiple populations of GnRH neurons, and their functions are dependent on their location in the brain and the GnRH gene that they express1 . We have focused our demonstration on GnRH3 neurons located in the terminal nerves (TN) associated with the olfactory bulbs using the intact brain of transgenic medaka fish (Figure 1B and C). Studies suggest that medaka TN-GnRH3 neurons are neuromodulatory, acting as a transmitter of information from the external environment to the central nervous system; they do not play a direct role in regulating pituitary-gonadal functions, as do the well-known hypothalamic GnRH1 neurons2, 3 .The tonic pattern of spontaneous action potential firing of TN-GnRH3 neurons is an intrinsic property4-6, the frequency of which is modulated by visual cues from conspecifics2 and the neuropeptide kisspeptin 15. In this video, we use a stable line of transgenic medaka in which TN-GnRH3 neurons express a transgene containing the promoter region of Gnrh3 linked to enhanced green fluorescent protein7 to show you how to identify neurons and monitor their electrical activity in the whole brain preparation6.

1. Dissection of Brains from Adult Medaka

2. Mounting the Brain in a Recording Chamber

An example of bilateral clusters of GFP-labeled TN-GnRH3 neurons from the excised brain of medaka fish are shown in Figures 1B and 1C. Each cluster contains about 8-10 GnRH neurons. The spontaneous neuronal activities of the target TN-GnRH3 were recorded in current-clamp mode (I=0) with typical firing rates of 0.5-6 Hz. The pattern of action potential firing is typically a tonic or beating pattern, with a fairly regular interspike interval. Sample traces are shown in Figure 2 (2A: loose-patch; 2B: whole-cell).

This experimental approach is also successful in recording from GFP-labeled GnRH neurons located in the forebrain of adult zebrafish (Figures 3A and 3B). Neuron electrical activity in the excised, intact brain was recorded in the similar way as described above in medaka by loose-patch (Figure 3C) and whole-cell recording (Figure 3D). Unlike with medaka TN-GnRH neurons, the pattern of spontaneous action potential firing of zebrafish GnRH neurons in the preoptic area, ventral telencephalon, and hypothalamus is often irregular. 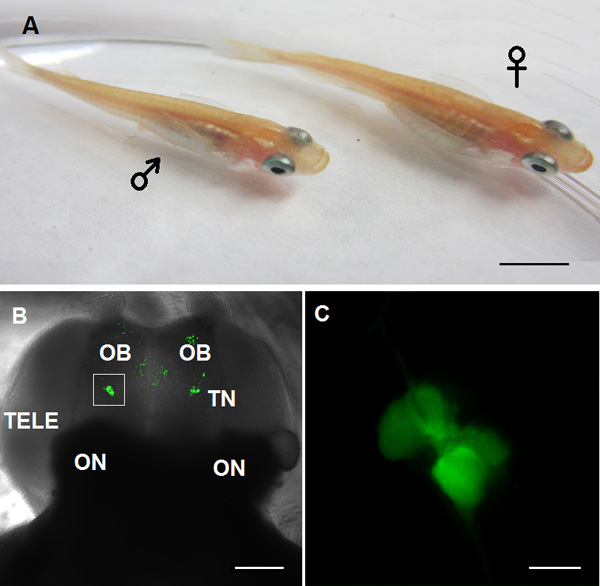 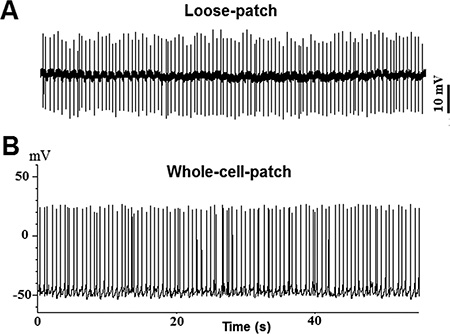 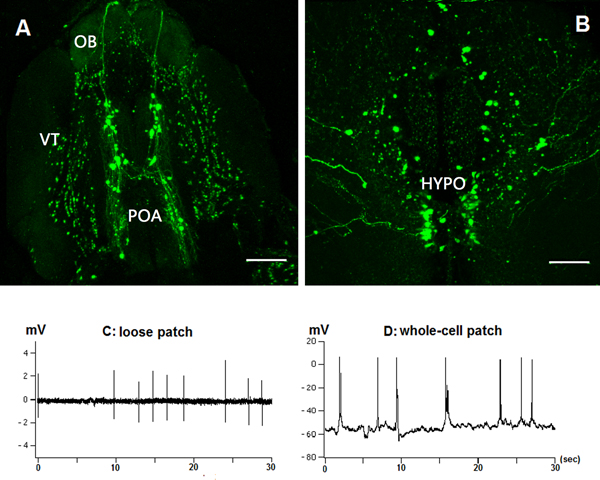 GnRH3:GFP transgenic fishes provide unique models to study the neurophysiological mechanisms underlying neuronal integration and regulation in central control of behaviors that are both directly and indirectly involved in reproduction3, 8-10. One of the significant advantages of this model system is that many GnRH3 neurons expressing GFP are close to the ventral surface of the brain, allowing for relatively easy access to the neurons for electrophysiological recording without disrupting neural circuits6, 9, 11, 12 (Figures 1B and 1C; Figures 3A and 3B). In this video, we have shown both loose-patch and whole-cell recordings from TN-GnRH3 neurons in the intact adult brain of medaka fish. TN-GnRH3 neurons exhibit a tonic or beating pattern of spontaneous action potential firing with a frequency of 0.5-6Hz.There were no detectable sex differences in spontaneous firing rate 5, but there were dramatic developmental changes in GnRH3 neuron electrical activities during embryogenesis9. Loose-patch and whole-cell electrophysiology have different methodological advantages and disadvantages. Loose-patch is technically easier than whole-cell recording, but only shows the neuron firing pattern and frequency. On the other hand, whole-cell recording can provide much more information: resting membrane potential, firing pattern and frequency, action potential analysis, membrane capacitance and resistance. Because loose-patch recording does not break the cell membrane and disrupt the intracellular ion and second messenger concentrations, it is ideal for long-term recording of neuronal activity. Whole cell recordings rupture the cell membrane and eventually lead to dialysis of intracellular molecules, thereby potentially altering neuron properties with more prolonged recordings. Because of the advantages and disadvantages of both electrophysiological methods, it can be important to study neuron properties using both techniques. Because both pH and osmolarity are very important for neuron survival and function, all the solutions in use need to be adjusted properly.

To confirm the identity of the recorded neuron, negative pressure is applied after completion of the recording, and then fluorescence at the tip of the electrode is confirmed using microscopic fluorescence imaging. Small molecular dyes or probes (such as Alexa Fluor 568 dye or biocytin) may be included in the intracellular solution for the whole-cell recording to mark the recorded neuron for further morphological analysis.

To record successfully from target neurons in intact brain, the depth of location of the neurons is crucial -- the deeper the neurons, the harder to patch (both loose-patch and whole-cell). Generally, the feasible depth for successful patching is about 5-6 cell layers from the surface. Medaka TN-GnRH3 neurons are typically at the ventral surface of the brain, while zebrafish hypothalamic GnRH3 neurons can be up to 6 cell layers from the surface. Positive pressure is very helpful to prevent the recording electrode from clogging while approaching the cells. This type of experimental approach can be used for any neuron that is genetically labeled with fluorescent protein. To study GnRH neuron activity in the adult brain, we routinely use medaka fish and zebrafish of 4-6 months of age. The younger fish with smaller brains or older fish with more calcified skulls, will make the dissection more challenging. The TN:GnRH3 neurons are easily accessible for electrophysiology from adult medaka brain, but this is not the case for adult zebrafish in which TN:GnRH3 neurons are encased in a tough connective sheath. On the other hand, GnRH3 neurons in POA, VT, and hypothalamus are more readily accessible for electrophysiology in adult zebrafish brain than from medaka. There are no sex differences based on the difficulties of dissection and electrophysiology recording of either species.

Although this is not an in vivo experimental approach, recording from the relatively intact neuronal circuits with minimum damage is an attractive way to explore the physiological function and regulation of the neuronal system of interest. The intact brain preparation lasts for hours, and a good recording can last for over an hour 6. This protocol is suitable for researchers who already have basic knowledge of and experience with electrophysiology techniques 13, and as well as the specialized equipment required to do the work.

We thank Dr. Meng-Chin Lin and Ms. Yuan Dong for technical assistance. This work was supported by a grant from the National Institutes of Health HD053767 (subcontract to NLW), and by funds from the Department of Physiology and Office of the Vice Chancellor for Research, University of California-Los Angeles (NLW). 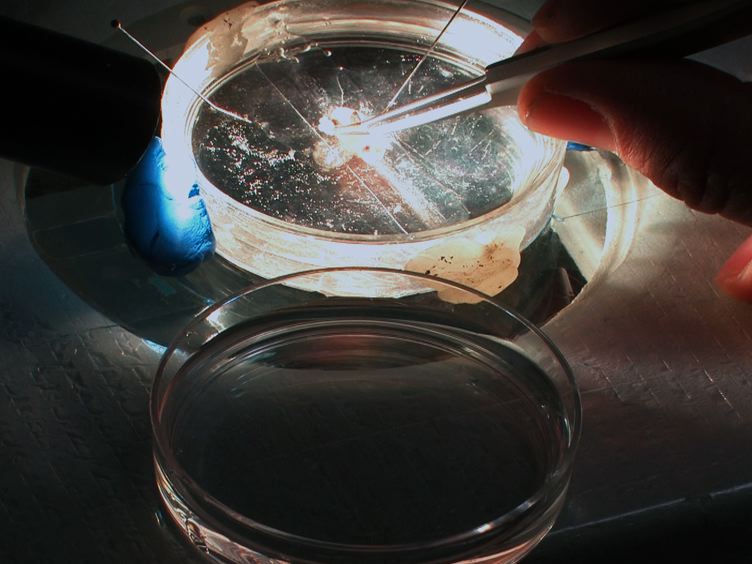