Here, we present a modification of a previously reported method that allows for the isolation of high quality and purified mitochondria from smaller quantities of mouse skeletal muscle. This procedure results in highly coupled mitochondria that respire with high function during microplate based respirometirc assays.

Dysfunctional skeletal muscle mitochondria play a role in altered metabolism observed with aging, obesity and Type II diabetes. Mitochondrial respirometric assays from isolated mitochondrial preparations allow for the assessment of mitochondrial function, as well as determination of the mechanism(s) of action of drugs and proteins that modulate metabolism. Current isolation procedures often require large quantities of tissue to yield high quality mitochondria necessary for respirometric assays. The methods presented herein describe how high quality purified mitochondria (~ 450 µg) can be isolated from minimal quantities (~75-100 mg) of mouse skeletal muscle for use in high throughput respiratory measurements. We determined that our isolation method yields 92.5± 2.0% intact mitochondria by measuring citrate synthase activity spectrophotometrically. In addition, Western blot analysis in isolated mitochondria resulted in the faint expression of the cytosolic protein, GAPDH, and the robust expression of the mitochondrial protein, COXIV. The absence of a prominent GAPDH band in the isolated mitochondria is indicative of little contamination from non-mitochondrial sources during the isolation procedure. Most importantly, the measurement of O2 consumption rate with micro-plate based technology and determining the respiratory control ratio (RCR) for coupled respirometric assays shows highly coupled (RCR; >6 for all assays) and functional mitochondria. In conclusion, the addition of a separate mincing step and significantly reducing motor driven homogenization speed of a previously reported method has allowed the isolation of high quality and purified mitochondria from smaller quantities of mouse skeletal muscle that results in highly coupled mitochondria that respire with high function during microplate based respirometirc assays.

The primary function of mitochondria is to produce ATP from oxidative phosphorylation. However, mitochondria have many other important cellular functions including but not limited to: the production and detoxification of reactive oxygen species, the regulation of cytoplasmic and mitochondrial calcium, organelle trafficking, ionic homeostasis, and involvement in apoptosis1,2. Therefore, it is not surprising that dysfunctional mitochondria play a role in many disease pathologies, such as aging, neurodegenerative diseases, cardiovascular disease, cancer, obesity, and diabetes3,4. Importantly, skeletal muscle mitochondria specifically are involved in many of these pathologies3-5.

Mitochondrial respiration assays using isolated mitochondria allow for the assessment of electron transport chain and oxidative phosphorylation function, and the determination of mechanism(s) of action of drugs and proteins that modulate metabolism. Mitochondrial isolation procedures exist for multiple tissue and cell types for a variety of species6,7. However, these procedures often require large quantities of tissue/cells for a high quality mitochondria yield necessary for classic respirometric assays.

Microplate based respirometirc assays allow for high throughput measurements using minimal quantities of isolated mitochondria, often just several µg per well8. Therefore, we present a modification of previously published methods7 to allow for high quality mitochondria to be isolated from smaller quantities of mouse skeletal muscle for use in microplate based respirometirc assays. In addition, methods are provided to establish the quality of the mitochondrial isolation preparation and the integrity of the mitochondrial membranes. Given that skeletal muscle mitochondria are involved in many pathological conditions, the measurement of O2 consumption in mechanistically driven studies is becoming more prevalent in biomedical research9,10.

Animal studies were performed under an approved protocol by the Institutional Animal Care and use Committee at Virginia Polytechnic Institute and State University.

3. Homogenization of Whole Tissue Lysate (Time: ~45 min; Can Be Done During Step 7)

Figure 2 depicts GAPDH and COXIV expression in isolated mitochondria and the whole skeletal muscle tissue lysate. GAPDH is a protein located in the cytosol, but can also be found in the nucleus after translocation, while COXIV is a protein located in the inner mitochondrial membrane. Expression of GAPDH and COXIV are evident in the whole tissue lysate. In the isolated mitochondria, expression of COXIV is observed, while only faint bands of GAPDH are evident. These findings indicate good mitochondrial isolations, with little contamination from non-mitochondrial components during the isolation procedure. 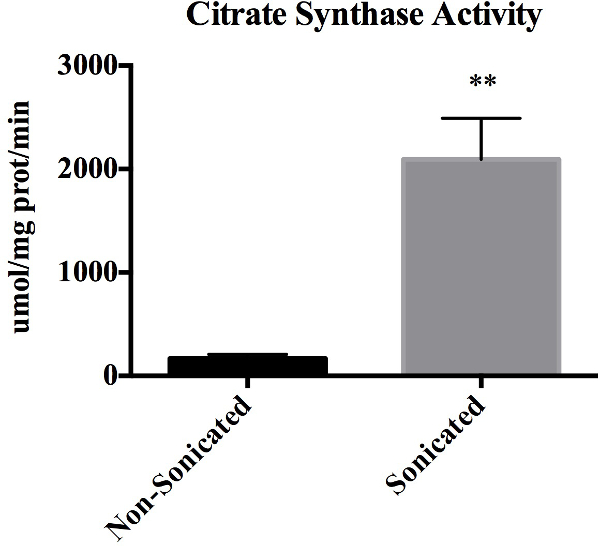 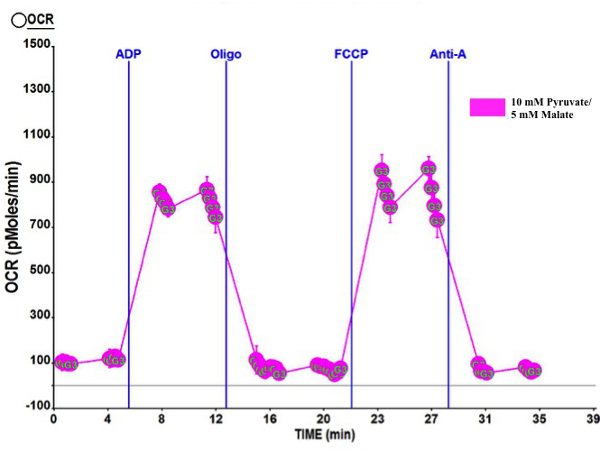 The methods presented herein provide a detailed description of a mitochondrial isolation procedure from minimal quantities (~75-100 mg) of mouse skeletal muscle. This isolation procedure is able to yield high functioning, pure mitochondria (~450 µg) as evidenced by O2 consumption rates, RCR values, maximal citrate synthase activity and protein expression from immunoblotting. Importantly, the mitochondria isolated from this procedure can be used for multiple respirometirc assays with microplate based O2 consumption technology that allows for high throughput.

The isolation of skeletal muscle mitochondria often requires harsh methods to liberate mitochondria from surrounding connective tissue and structural proteins7,16. Consequently, mitochondrial membranes can become disrupted, thus impairing the activity (and thus the accuracy) of mitochondrial O2 consumption during subsequent respirometric assays. By including an additional step of tissue mincing using razor blades after tissue excision to a previously described protocol7, a significantly reduced rotor speed for motor driven homogenization was possible (80 rpm vs. 1,600 rpm). These gentler homogenization and resuspension techniques leads to a high percentage of mitochondria with intact membranes (92.5± 2.0%), as assessed from citrate synthase activity following the isolation procedure. Our findings are consistent with Asmann et al.17, who report between 90-95% intact mitochondrial preparations following isolation from human skeletal muscle. It is important to note that measuring citrate synthase activity is better suited for measuring physical integrity of the mitochondrial membranes and should not be used to assess functional integrity of the isolated mitochondria. On the other hand, O2 consumption assays and determination of RCR from these assays should be used to measure the function of isolated mitochondria1. In addition, RCR can also be used as an indicator of coupled mitochondria. Therefore, the OCR and mitochondrial states within a typical range from the pyruvate/malate assay8, and the high RCR values obtained from a variety of respirometric assays indicates that the mitochondria derived from this protocol are tightly coupled and highly functional.

All steps of this protocol are important, however there are three critical steps to this protocol. First, the mincing of red skeletal muscle with three different razor blades (step 2.4) is critical because this step allows for slower rotor speeds during the homogenization step (step 2.11). Second, the performance of many steps on ice or in chilled buffers is critical to maintain the mitochondria in a resting state prior to the microplate based respirometric assays. Finally, the gentle resuspension of the mitochondria pellet into IBM2 is of utmost importance. Gentle mixing maintains mitochondrial integrity, which is crucial for accurate respirometic assays.

Some limitations of this technique are worth mentioning. First, the equipment needed (e.g., ultracentrifuge, motor driven homogenizer, etc.) to perform the isolation procedure can be expensive. In addition, multiple quality control methods are needed to ensure clean and intact mitochondria. However, once the researcher is proficient in the isolation procedure, high quality mitochondria are yielded that can be used in a multitude of measurements including, but not limited to: Western blots, enzymatic assays, RT-PCR, PCR, H2O2 assays, and high throughput microplate respiratory measurements. It is important to note that this isolation procedure has been optimized and modified for small quantities of mouse skeletal muscle and caution should be taken when trying to apply isolation techniques from a given tissue from the same species (and even to the same tissue from different species) to other tissues/species. For optimal results, searching the literature will be the best option when trying to find the best isolation method for the intended tissue/species.

George Rogers is an employee of Seahorse Bioscience that produces the instrument for which this protocol was modified. 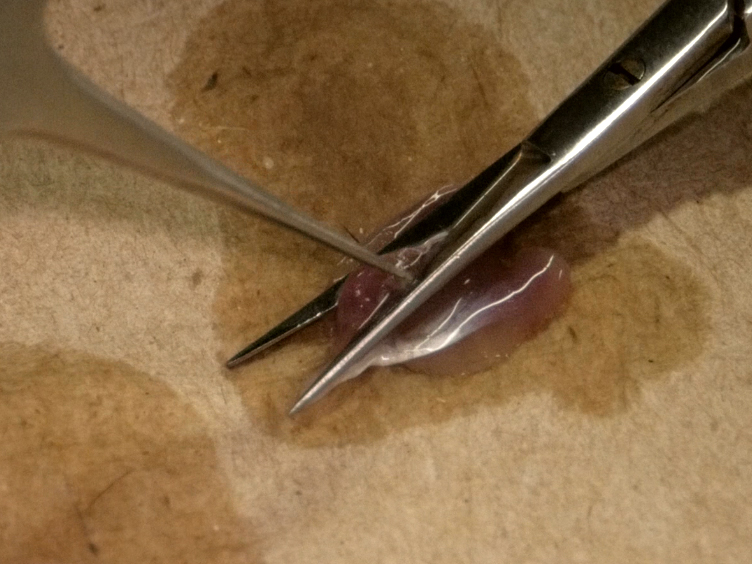