Bone marrow-derived macrophages (BMDMs) are mature leukocytes that serve a critical physiological role as professional phagocytes capable of clearing a variety of particles. Normally, BMDMs are restricted from the central nervous system (CNS), but following an injury, they can readily infiltrate. Once within the injured CNS tissue, BMDMs are the primary cell type responsible for the clearance of injury-derived cellular debris, including large quantities of lipid rich myelin debris. The neuropathological ramifications of BMDM infiltration and myelin debris phagocytosis within the CNS are complex and not well understood. The protocols described here, allow for the direct in vitro study of BMDMs in the context of CNS injury. We cover murine BMDM isolation and culture, myelin debris preparation, and assays to assess BMDM myelin debris phagocytosis. These techniques produce robust quantifiable results without the need for significant specialized equipment or materials, yet can be easily customized to meet the needs of researchers.

Bone marrow-derived macrophages (BMDMs) are an important link between the innate and adaptive immune systems. As antigen presenting cells (APCs), they can communicate with lymphocytes via both antigen presentation and cytokine release1,2,3. However, as professional phagocytes, their primary function is to clear pathogens, aged cells, and cellular debris1,4. Following a spinal cord injury (SCI), substantial quantities of myelin debris is generated from dying oligodendrocytes, the cell type responsible for CNS axon myelination5. We and others have shown that clearance of myelin debris is primarily the responsibility of infiltrating BMDMs5,6,7. However, within spinal cord injury sites engulfment of myelin debris has been suggested to shift these normally anti-inflammatory cells towards a pro-inflammatory state5,8,9. As key mediators of neuro-inflammation in the injured spinal cord, BMDMs are important clinical targets.

To help investigate the influence of BMDMs in the injured spinal cord, we have developed an in vitro model to directly study how BMDMs respond to myelin debris. To improve biological relevance, both primary murine BMDMs and freshly isolated myelin debris are used in these investigations. As such, the methods presented here also detail the isolation and culture of primary murine BMDMs, and a modified sucrose gradient technique used to isolate murine CNS derived myelin debris10,11,12. Myelin debris can be readily labeled with a fluorescent dye, carboxyfluorescein succinimidyl ester (CFSE), to track its internalization by BMDMs. CFSE is well suited for this application because it is non-cytotoxic, and its narrow fluorescent spectrum permits multiplexing with other fluorescent probes13,14. Following phagocytosis, myelin debris lipids are transported through the lysosomes and packaged as neutral lipids into intracellular lipid droplets5. To quantify this intracellular lipid accumulation, we present an Oil Red O (ORO) staining method optimized for quantitative image analysis. This simple staining method produces robust reproducible results and quantification15. These methods facilitate the study of myelin debris phagocytosis and lipid retention with limited specialized equipment.

The methods described here and in Section 2 have been approved by the Florida State University Institutional Animal Care and Use Committee (IACUC) and follows the guidelines set forth in the Guide for Care and Use of Laboratory Animals, 8th edition. All animals used in this in this protocol are house in a dedicated laboratory animal facility until use. No in vivo experimentation was performed prior to sacrifice. Animal numbers were based on experimental need using average cell and myelin collections as a guide in order to minimize usage.

NOTE: The following is the basic method for observing phagocytosis of fluorescently labeled myelin debris. Addition of other treatments and experimental conditions will need to be optimized by the investigator.

NOTE: The following is the basic method for observing intracellular myelin-debris-derived lipids. The use of CFSE labeled myelin debris is not recommended for fluorescent quantification of ORO staining due to spectral overlap. Addition of other treatments and experimental conditions will need to be optimized by the investigator.

Treatment of BMDMs with CFSE labeled myelin debris should yield clear internalization (Figure 2). While a 3-hour interaction time is sufficient for BMDMs to phagocytose enough added myelin debris for robust downstream detection, intracellular accumulation can be observed with as little as 1 hour of interaction. However, some myelin debris may still be present on the cell surface after washing. This may be due to insufficient washing, or particles not being fully internalized during the early stages of phagocytosis.

While BMDMs can rapidly internalize myelin debris, lysosomal processing is required before ORO stainable lipid droplets form. To demonstrate, BMDMs were incubated with myelin debris for 90 minutes, washed, and cultured for additional amounts of time prior to fixation and staining (Figure 3). Figure 4 shows there is a delay between treatment initiation and neutral lipid appearance. It should also be noted that lipid retention is not stable during culture. BMDMs will begin to metabolize accumulated lipids soon after droplet formation. As such, we recommend waiting no longer than 24 hours between washing away non-engulfed myelin debris and fixation.

Quantification of ORO stained area demonstrates the rate of myelin lipid metabolism in BMDMs (Figure 5). Following a 90-minute interaction period, cells were returned to incubation in fresh CMCM. During the early chase period in fresh medium, the BMDMs metabolize the phagocytosed myelin debris lipid component into neutral ORO stainable lipids. A steady increase in ORO positive area is typical in the hours following the interaction. After 24 hours however, the BMDMs will have effluxed or metabolized a significant portion of the intracellular lipids.

Figure 3: Diagram of Oil Red O (ORO) Experimental Design. BMDM are treated with 1mg/mL myelin debris (1:100 dilution) for 90 minutes, followed by washing and culture in fresh medium prior to fixation. Please click here to view a larger version of this figure. 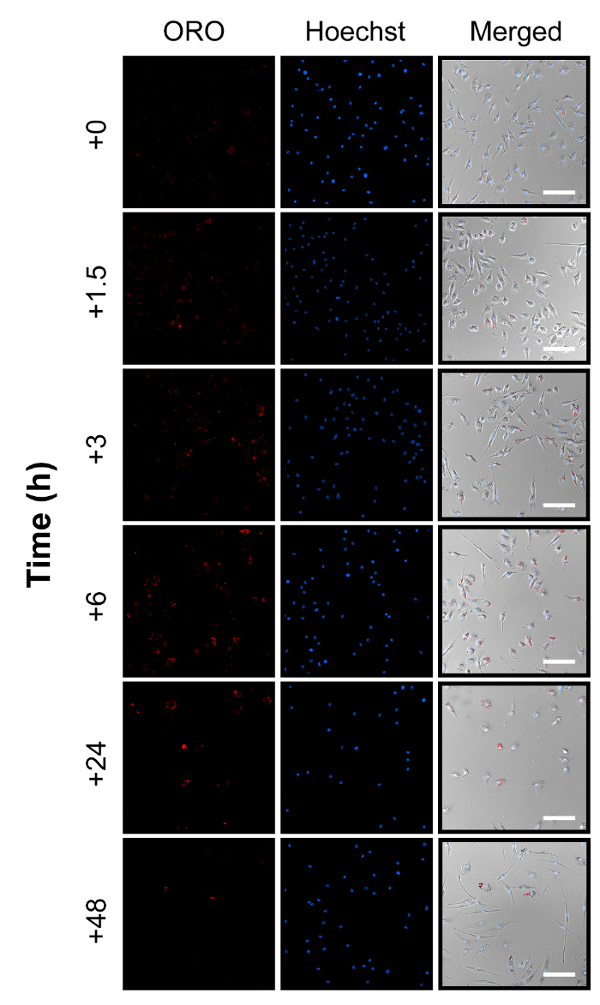 Figure 4: ORO Staining of BMDM Following Myelin Debris Phagocytosis. Following fixation with 4% PFA at the indicated time-points, BMDMs were stained with ORO and Hoechst 33258. Representative images for each time-point are shown. Scale = 100 µm. Please click here to view a larger version of this figure. 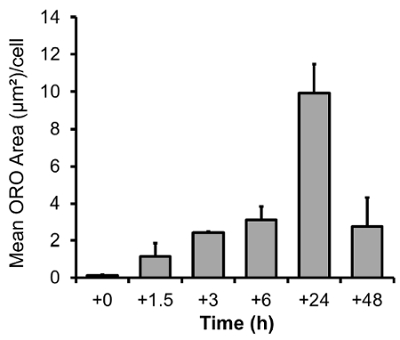 Figure 5: Quantitative Image Analysis of ORO Staining. For quantification of ORO staining, 3 wells were imaged at 20X with 5 images per well. All image acquisition settings were identical. Error bars = SEM. (n=3). Please click here to view a larger version of this figure.

The procedures described here utilize both freshly isolated crude CNS myelin debris and primary bone marrow-derived macrophages. To reduce animal expenditures, we recommend that both brains and bone marrow cells be harvested from each mouse at the time of sacrifice. Two researchers working together can prepare both materials simultaneously. Alternatively, brains can be stored at -80 °C in PBS supplemented with antibiotics prior to myelin debris isolation. It has been our experience that brains can be maintained in these conditions for up to 1 month with no appreciable loss of myelin debris generation potential.

CFSE is used to label myelin debris because of its ease of use and florescent intensity. The dye remains quenched until cellular esterases cleave the acetate group on the molecule14. The freed succinimidyl ester group can then react with primary amides, resulting in covalent attachment to cellular proteins14. While CFSE is excitable using standard green fluorescent channels, there are several derivatives commercially available with different spectral properties. Thus, it is possible to design a similar phagocytosis assay using multiple fluorescent dyes. It should also be noted that because the dye readily crosses plasma membranes, it can be used to label apoptotic cells in a similar manner as myelin debris19. Moreover, while our method relies upon standard image analysis, with user optimization, quantification can be performed using flow cytometry or a high throughput plate imaging system.

Oil Red O (also known as Solvent Red 27, or Sudan Red 5B) is a fat-soluble dye that has been used extensively to stain neutral lipids in histological samples. Its deep red pigmentation allows for visualization of intracellular lipids via both bright field and fluorescent microscopy5,20. Using fluorescent microscopy allows for single channel imaging and robust quantification of ORO stained lipid droplets. While the staining method is simple and highly reproducible, care must be taken during sample preparation. It is critical that alcohol or acid-based fixatives not be used, as they can dissolve intracellular lipids, leading to a significant reduction in staining intensity. Additionally, as with any quantitative image analysis, the importance of standardized image capture settings and sufficient unbiased sampling cannot be understated. The use of staining controls is recommended to account for any sample auto-fluorescence. Such staining controls should be treated identically, but left unstained with ORO to measure the level of background auto-fluorescence. Even so, our image analysis method requires less optimization than other lipid quantification techniques, such as the ORO extraction method21, which requires standard curve preparation, is more prone to experimental variability, and necessitates destruction of the sample. The use of image based analysis has several advantages over traditional ORO extraction methods in that it non-destructive and is compatible with immunostaining21,22 .

Finally, while the procedures described are relatively straight-forward, it is critical that proper aseptic technique be used, since macrophages express multiple receptors that recognize pathogen associated molecular patterns (PAMPS) such as the endotoxin lipopolysaccharide (LPS)23. Interaction with bacterial contaminates will result in macrophage activation and can dramatic change their function24,25. In regards to the collected myelin debris, testing for contamination is recommended. Endotoxin detection methods such as the limulus amebocyte lysate (LAL) assay have high sensitivity, and have been used previously for this application5,19.

Macrophages play an important role in both health and disease, yet the role of BMDMs in the context of CNS injury is currently an important topic of investigation. Using the methods described here, researchers can begin to better understand the mechanism of myelin debris phagocytosis by BMDMs.

The authors would like to thank Glenn Sanger-Hodgson, Media Specialist at the FSU College of Medicine for all his work in video production, editing, and voice-over. 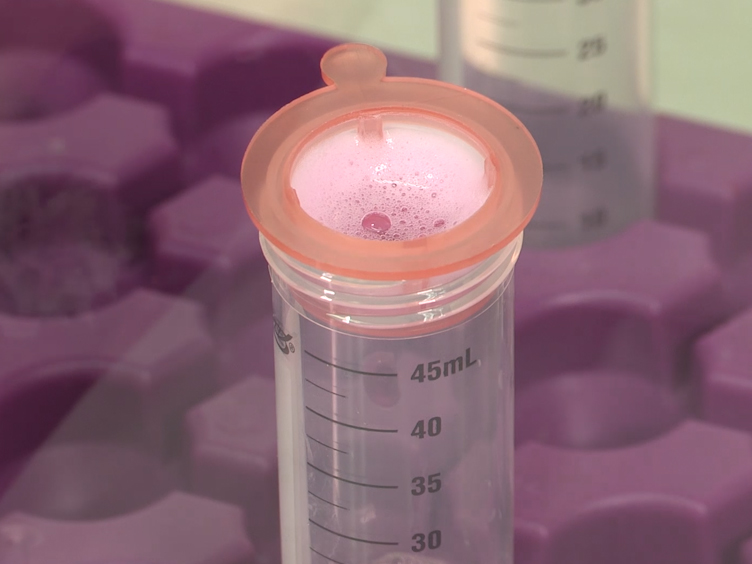