The protocol describes a high-throughput approach to determining structures of membrane proteins using cryo-electron tomography and 3D image processing. It covers the details of specimen preparation, data collection, data processing and interpretation, and concludes with the production of a representative target for the approach, the HIV-1 Envelope glycoprotein. These computational procedures are designed in a way that enables researchers and students to work remotely and contribute to data processing and structural analysis.

Since its discovery nearly 30 years ago, more than 60 million people have been infected with the human immunodeficiency virus (HIV) (www.usaid.gov). The virus infects and destroys CD4+ T-cells thereby crippling the immune system, and causing an acquired immunodeficiency syndrome (AIDS) 2. Infection begins when the HIV Envelope glycoprotein "spike" makes contact with the CD4 receptor on the surface of the CD4+ T-cell. This interaction induces a conformational change in the spike, which promotes interaction with a second cell surface co-receptor 5,9. The significance of these protein interactions in the HIV infection pathway makes them of profound importance in fundamental HIV research, and in the pursuit of an HIV vaccine.

The need to better understand the molecular-scale interactions of HIV cell contact and neutralization motivated the development of a technique to determine the structures of the HIV spike interacting with cell surface receptor proteins and molecules that block infection. Using cryo-electron tomography and 3D image processing, we recently demonstrated the ability to determine such structures on the surface of native virus, at ˜20 Å resolution 9,14. This approach is not limited to resolving HIV Envelope structures, and can be extended to other viral membrane proteins and proteins reconstituted on a liposome. In this protocol, we describe how to obtain structures of HIV envelope glycoproteins starting from purified HIV virions and proceeding stepwise through preparing vitrified samples, collecting, cryo-electron microscopy data, reconstituting and processing 3D data volumes, averaging and classifying 3D protein subvolumes, and interpreting results to produce a protein model. The computational aspects of our approach were adapted into modules that can be accessed and executed remotely using the Biowulf GNU/Linux parallel processing cluster at the NIH (http://biowulf.nih.gov). This remote access, combined with low-cost computer hardware and high-speed network access, has made possible the involvement of researchers and students working from school or home.

The approach described here was developed using a specific set of instruments, tools and software. Because all labs will not be using this same experimental setup, effort was made to generalize the approach where possible, and provide alternatives where this was not possible.

In the following section vitrified grids are prepared using the FEI Vitrobot Mark III, a blotting and plunge freezing robot. See Iancu, et al. for a detailed protocol on using this system 7. As an alternative to a robotic plunger, a guillotine-style or gravity plunger is perfectly sufficient 6.

In Sections 1.2. and 1.3. a Gatan Solarus 950 glow discharge unit is used to clean sample grids and increase their hydrophilicity, though any glow discharge device designed for use with electron microscopy grids can be substituted.

Though the amount of sample volume applied to the grid before blotting and plunge freezing should be in the range of 2 μL, the virus and protein-A gold colloid volume in the sample mixture will vary depending on the source. As such, it is likely that a range of virus and gold dilutions or ratios will have to be tested and imaged in the microscope, and an ideal mixture determined empirically. Note that when image data is acquired in Section 3, between 10 and 20 gold fiducial markers should be present for proper tilt series alignment.

Caution: This section describes the use of gaseous ethane, hydrogen, and oxygen which are highly flammable. Proper caution should be taken when using these gases. Additionally, care should be taken to handle virus samples in accordance with biosafety recommendations. Finally, always wear protective eyewear and clothing when handling liquid nitrogen (N2) and ethane.

Throughout this section, the liquid N2 level in the loading chamber should be monitored vigilantly, and liquid replenished as needed, to ensure that grid boxes remain immersed. Before bringing a tool into contact with a grid, cool it by submerging it in liquid N2 until it equilibrates with the liquid. After each use, tools should be defrosted using a hot air gun.

Throughout this section the FEI Tecnai G2 Polara transmission electron microscope (TEM) is used in conjunction with a Gatan Cryo Workstation. While the principle of loading samples under liquid N2 conditions is applicable to all cryo-electron microscopy work, the steps of this section are specific to the equipment used in the experiment. The steps used for different equipment will vary by manufacturer.

During this section, the FEI Batch Tomography software interface is used to set up a batch file that stores the coordinates of all grid positions of interest. When instructed by the user, the Batch Tomography software will revisit each of the positions and will coordinate tilt series acquisition via Digital Micrograph. If this software is not available, the Leginon software package is viable free, open source alternative 13. Imaging was done at 200 keV, using a Gatan Imaging Filter (GIF) with a post-GIF 2K x 2K CCD camera (Gatan).

This section uses a customized extension of IMOD that allows the user to designate virion subvolumes within the tomogram. In Section 6, the user defined virion boundaries are used as a surface along which spikes are automatically selected.

6. Classifying and averaging the particles

Using 3D averaging and coordinate fitting, a variety of HIV and SIV Env spike structures have been resolved. Presented in Figure 3A is the structure of the Envelope spike from the HIV-1 strain, BaL (purple). The spike has three-fold symmetry with dimensions of ˜ 120 Å as measured from the membrane to the spike apex, and a maximal width of ˜ 150 Å which tapers down to ˜ 35 Å at the base of the spike. As seen in Figure 3B, by combining the density map for trimeric Env determined using cryo-electron tomography with the crystallographically determined structure for monomeric gp120 (red, derived from PDB ID, 2NY7), we were able to obtain a working molecular model for the trimeric envelope glycoprotein complex (PDB ID, 3DNN) 9.

Our approach also allows for the structural analysis of complexes formed between trimeric Env and a variety of gp120-specific protein fragments and antibodies. An example of this, in which Env is complexed with the broadly neutralizing b12 Fab is shown in Figure 4A (the entire complex is shown in purple). In this figure, the extra density corresponding to b12 is seen projecting outward from the spike, and parallel to the membrane. Structural interpretations of such complexes can be extended to the molecular level by fitting the density maps with atomic coordinates for portions of the spike, bound to the corresponding ligand. As seen in Figure 4B, when this density map is fitted with coordinates of the gp120 spike protein (red, derived from PDB ID, 2NY7) bound by b12 Fab (white), the relative orientations of the three gp120 cores can be discerned (PDB ID, 3DNL). These conformational relationships are instructive for understanding how such ligands interact with the spike and interfere with virus activity. Some other structures of unliganded and liganded Env that have been resolved by the method presented here include those of HIV-1 R3A, SIV CP-MAC, SIVmneE11S and SIVmac239, the ternary complex between HIV-1 Bal Env, sCD4 and the 17b Fab, and SIV CP-Mac Env complexed to the 7D3 antibody 9,14. 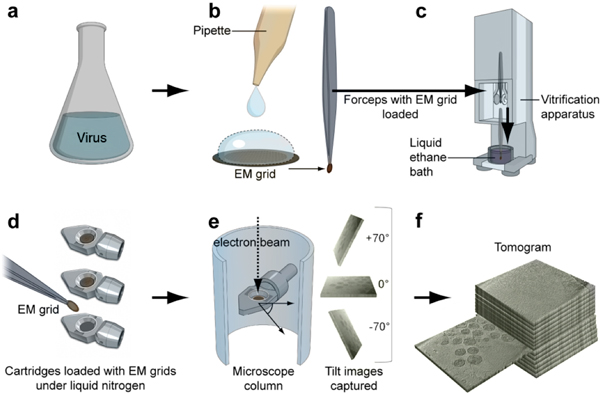 Figure 2. (A) A representative slice from a tomogram of HIV-1 virions. (B) A single HIV-1 virion, with the core and surface spikes shown schematically.

Figure 3. (A) Three-dimensional structure of the HIV-1 BaL Envelope glycoprotein (surface spikes) as displayed on the surface of the viral membrane. (B) Molecular model for the trimeric spikes determined by placing three copies of the structures for monomeric gp120 (red) derived by X-ray crystallography into the density map 9.

Figure 4. (A) Three-dimensional structure of HIV-1 BaL Envelope glycoprotein in complex with the Fab fragment of a broadly neutralizing antibody, b12. (B) Molecular model for the complex determined by placing three copies of the structures for monomeric gp120-B12 Fab complex derived by X-ray crystallography into the density map 9.

The cryo-electron microscopy and three-dimensional classification and averaging methods presented here allow for the determination of three-dimensional structures of envelope glycoprotein complexes to ˜ 20 Å resolution. Fitting of X-ray coordinates of the monomeric components to the density maps allows for structural interpretation at the molecular level. Continuing improvements in low-cost computing equipment combined with developments in open source scientific tools and the proliferation of network infrastructure make possible previously unimaginable scientific collaborative endeavors. We take advantage of these developments and show that advanced scientific techniques can be brought within the reach of students of many ages.

We thank the Biological Products Section of the AIDS and Cancer Virus Program, SAIC Frederick, Inc, for providing purified, AT-2 treated HIV-1 viruses, Steven Fellini and colleagues for assistance with use of the high-performance computational capabilities of the Biowulf Linux cluster at NIH, Bethesda, MD (http://biowulf.nih.gov), FEI Company for assistance with electron microscopy, and Ethan Tyler for expert assistance with figures. This work was supported by funds from the Center for Cancer Research at the National Cancer Institute, National Institutes of Health, Bethesda, MD.