Skip to content
Trial ends in Request Full Access Tell Your Colleague About Jove
JoVE Journal
Neuroscience
This is a sample clip. Sign in or start your free trial.
Neuroscience
✖
Call For Abstracts!
Neurodegenerative Disorders
SUBMIT

An in vivo imaging protocol to monitor primary sensory axons following dorsal root crush is described. The procedures utilize wide-field fluorescence microscopy and thy1-YFP transgenic mice, and permit repeated imaging of axon regeneration over 4 cm in the PNS and axon interactions with the interface of the CNS.

The primary sensory axons injured by spinal root injuries fail to regenerate into the spinal cord, leading to chronic pain and permanent sensory loss. Regeneration of dorsal root (DR) axons into spinal cord is prevented at the dorsal root entry zone (DREZ), the interface between the CNS and PNS. Our understanding of the molecular and cellular events that prevent regeneration at DREZ is incomplete, in part because complex changes associated with nerve injury have been deduced from postmortem analyses. Dynamic cellular processes, such as axon regeneration, are best studied with techniques that capture real-time events with multiple observations of each living animal. Our ability to monitor neurons serially in vivo has increased dramatically owing to revolutionary innovations in optics and mouse transgenics. Several lines of thy1-GFP transgenic mice, in which subsets of neurons are genetically labeled in distinct fluorescent colors, permit individual neurons to be imaged in vivo1. These mice have been used extensively for in vivo imaging of muscle2-4 and brain5-7, and have provided novel insights into physiological mechanisms that static analyses could not have resolved. Imaging studies of neurons in living spinal cord have only recently begun. Lichtman and his colleagues first demonstrated their feasibility by tracking injured dorsal column (DC) axons with wide-field microscopy8,9. Multi-photon in vivo imaging of deeply positioned DC axons, microglia and blood vessels has also been accomplished10. Over the last few years, we have pioneered in applying in vivo imaging to monitor regeneration of DR axons using wide-field microscopy and H line of thy1-YFP mice. These studies have led us to a novel hypothesis about why DR axons are prevented from regenerating within the spinal cord11.

In H line of thy1-YFP mice, distinct YFP+ axons are superficially positioned, which allows several axons to be monitored simultaneously. We have learned that DR axons arriving at DREZ are better imaged in lumbar than in cervical spinal cord. In the present report we describe several strategies that we have found useful to assure successful long-term and repeated imaging of regenerating DR axons. These include methods that eliminate repeated intubation and respiratory interruption, minimize surgery-associated stress and scar formation, and acquire stable images at high resolution without phototoxicity.

1. Microscope set up and imaging preparation

2. Laminectomy and surgical exposure of the L5 dorsal root

We have observed that, whereas they did not regenerate after a transection injury, almost all YFP+ axons grew through the site of injury by 3 days after crush (Figure 1)11. Typically, the next day after crush, we observed dying-back degeneration of proximal stump axons and fragmentation/degeneration of the same axons distal to the crush, which confirmed that axons had been appropriately damaged (e.g., Figure 1; Day 3 and 5). Several additional criteria are applied to unambiguously distinguish regenerating axons from axons that were spared or had recovered from the injury. These included the following: (1) regenerating axons show an expansion of the non-fluorescent portion of the YFP+ axon at the crush site due to proximal and distal degeneration (in contrast to narrowing of the unlabeled gap due to fluorescent cytoplasm refilling the crush site if axons survived the injury); (2) regenerating axons are much thinner, less brightly fluorescent, and more undulating than axons that survived the injury; (3) regenerating neurites are thinner and more dimly fluorescent than the degenerating fluorescent fragments of axons through which they extended; (4) in contrast to surviving or spared axons, regenerating axons stop at the DREZ; and (5) in contrast to surviving or spared axons, regenerating axons do not exhibit nodes of Ranvier. Figure 1 shows four superficial YFP+ axons immediately after crush (A1; colored arrows). Three days after the crush, all four axons extend a single neurite that grows through the crush site (A2). Five days after crush, neurites remain stable and there is no additional growth from these or other proximal axons (A3).

The regenerating neurites that crossed the crush site elongated through much thicker and brighter fluorescent fragments of a degenerating axon (i.e., endoneurial tubes), and arrive at the DREZ as early as 4 days after the crush (about 3mm/2 days)11. Repeated imaging of these axons and their tips every two or three days for two more weeks (Figure 2) revealed that they did not grow forward or retract, but remained immobile. The only noticeable change was swelling of the tips and shafts of some axons. These observations therefore demonstrate surprisingly quick and chronic immobilization of the regenerating axons at the DREZ. 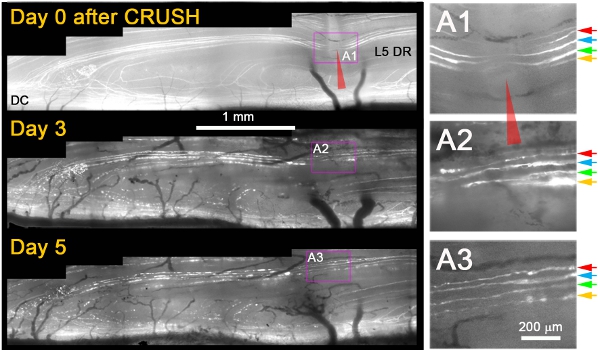 Figure 1: Repeated imaging of L5 DR YFP+ axons at the site of dorsal root crush over 5 days. The medial portion of the L5 root was crushed (red arrowhead) and imaged on Days 0, 3, and 5 after the crush. The area of the crush is magnified in the right panels (A1-A3).

Figure 2: Repeated imaging of axons arrived at the DREZ over 20 days after L5 root crush. Day 4, three axons (colored arrows) arrived at the DREZ. The tips of these axons remain in the same location and have a similar appearance in subsequent imaging sessions on Days 7, 9, 13, 15, and 20. Positions of an axon tip relative to other axon tips and landmarks (asterisks) were used to determine axon motility between imaging sessions.

Imaging DR regeneration directly in living mice is particularly challenging because it requires a substantial dorsal laminectomy to monitor axon growth over a wide area followed by multiple invasive surgical and anesthetic procedures in subsequent imaging sessions. Several strategies helped to overcome these challenges. First, successful imaging required reducing mouse mortality (approximately 25%) by minimizing the duration of anesthesia and bleeding, and by meticulous post-op care. The mortality was also reduced by using settings that permit fast camera speed to quickly acquire multiple images without intubation or respiratory interruption. Preventing scar accumulation on the exposed cord was also essential. These collagenous scars develop rapidly between imaging sessions and form a thin but opaque layer on the dura surface. Removal is tedious, prolongs the image session and risks damage to vasculature and axons. An effective strategy for scar removal was to apply a thin matrix membrane that tightly adhered to the exposed cord and caused scars to accumulate on the membrane rather than on the dura. Because of the potential for confounding effects due to artifacts from surgical procedures and photoxicity, we carried out extensive control experiments in which we examined axonal profiles in mice without repetitive imaging or surgery.

The protocols utilize widefield microscopy with settings that permit fast camera speed and image acquisition, without intubation or respiratory interruption. We acquire multiple images of superficial axons and later select the best images with the least distortion due to breathing movements. This method provides insufficient spatial resolution, however, although it permits easy identification and tracking of the superficially positioned DR axons over a wide area: it was impossible to have the entirety of multiple axons focused in each imaging session, or to obtain clear images of several axon tips simultaneously and repeatedly each time.

To facilitate identification of the same axons in repeated imaging sessions, one can consider using fluorescent microsphere beads (1μm, Invitrogen) to create more 'landmarks', in addition to the intrinsic ones (i.e., unique branching patterns of blood vessels and adjacent axons). Even if the growth tips are extremely dynamic and change shape quickly, one can identify them by their parental axon shaft, which remains unchanged peripherally.

We thank Dr. Alan Tessler for comments and editorial help. This work was supported by NIH NS062320.