We introduce a novel method for the maintenance of human intestinal mucosa in culture and monitoring of the response to various types of stimuli over at least 24 hrs. With our method, the polarity of the tissue is maintained, allowing for a physiological stimulation via the apical route.

Intestinal homeostasis is preserved also through various complex interactions between the microbiota (including food-associated beneficial bacterial strains) and the host, that regulate the attachment/degradation of mucus, the production of antimicrobial peptides by the epithelial barrier, and the "education" of epithelial cells' that controls the tolerogenic or immunogenic phenotype of unique, gut-resident lymphoid cells' populations. These interactions have been so far very difficult to reproduce with in vitro assays using either cultured cell lines or peripheral blood mononuclear cells. In addition, mouse models differ substantially in components of the intestinal mucosa (mucus layer organization, commensal bacteria community) with respect to the human gut. Thus, studies of a variety of treatments to be brought in the clinics for important stress-related or pathological conditions such as irritable bowel syndrome, inflammatory bowel disease or colorectal cancer have been difficult to carry out.

To address these issues, we developed a novel system that enables us to stimulate explants of human intestinal mucosa that retain their in situ conditioning by the host microbiota and immune response, in a polarized fashion. Polarized apical stimulation is of great importance for the outcome of the elicited immune response. It has been repeatedly shown that the same stimuli can produce completely different responses when they bypass the apical face of the intestinal epithelium, stimulating epithelial cells basolaterally or coming into direct contact with lamina propria components, switching the phenotype from tolerogenic to immunogenic and causing unnecessary and excessive inflammation in the area.

We achieved polarized stimulation by gluing a cave cylinder which delimited the area of stimulation on the apical face of the mucosa as will be described in the protocol. We used this model to examine, among others, differential effects of three different Lactobacilli strains. We show that this model system is very powerful to assess the immunomodulatory properties of probiotics in healthy and disease conditions.

1. Obtaining and Preparing the Tissue

*The size of the specimen depends on the availability of the tissue: the part of the tissue obtained, is strictly what is not needed for diagnosis and can vary greatly between healthy and IBD subjects. Healthy tissue is excised from patients undergoing surgery for colon cancer.

*The metal grids are made of iron. The mesh is square-shaped with a side of 0.5 mm.

*If you wish to incubate for longer time points, make sure you use a much smaller volume of stimuli (10-20 μl) and directly place the tissue in an atmosphere of 100% O2 in the pressure of 1 Atm (see 3.5).

*if you want to keep supernatants for longer, store them at -80 °C.

We succeeded in maintaining healthy and IBD human intestinal mucosa in culture for at least 24 hr preserving the wellbeing of the tissue. In accordance with previous observations 1, this was only possible if the majority of the culture time (at least 85% of total) took place in O2, as the tissue did not survive for 24 hr in conventional incubators (Figure 2). We have also shown that different responses of the explants can be observed on this model depending on the polarity of the stimulation (apical vs basolateral) and the immunogenicity of the stimuli 2,3.

Using this protocol, we show that different probiotic strains can elicit different responses on the tissue's part. Lactobacillus plantarum NCIMB8826 proved to be surprisingly immunogenic on healthy tissue. Contrary to the two other Lactobacilli strains, not only did it induce migration of lymphoid cells towards the uppermost surface of the mucosa, but it also significantly upregulated a chemokine relevant to this migration, CCL4, as well as IL-1b, a cytokine traditionally related to pro-inflammatory activity. To our surprise, even though we had previously observed a preventive action of L. paracasei in a mouse model of colitis 4, this did not translate to a curative effect when live bacteria of this strain were applied on inflamed IBD tissue. Rather, all three strains proved detrimental when used on IBD mucosa in the acute phase of the disease 2.

Further, we showed that the metabolic product of a probiotic, called postbiotic, is capable of shielding healthy epithelium against a rather invasive Salmonella strain (FB62), while at the same time significantly ameliorates inflammation when applied on IBD mucosa 2. 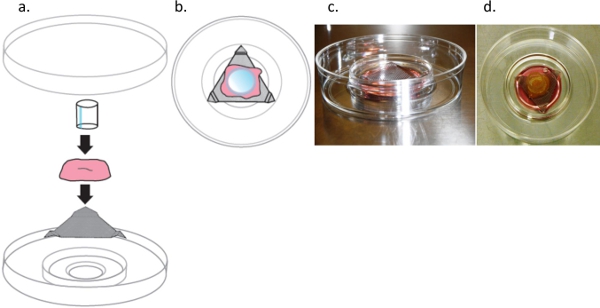 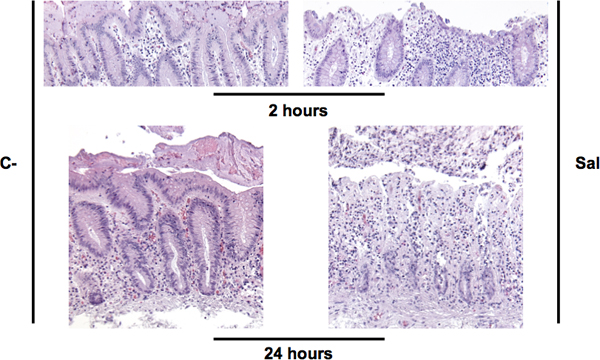 Figure 3. The effect of a pro-inflammatory stimulus on the explants. C-: Unstimulated tissue cultured for the indicated time points; Sal: Tissue challenged with Salmonella and cultured for the indicated time points. The destruction of the upper layer of the epithelium is already visible at 2 hr. The explant presents extensive degeneration after 24 hr. Original magnification: 10X.

The need for physiologically relevant models on which treatments for human intestinal mucosa can be validly tested has long been emphasized. Many researchers have identified potential artifacts and defects in both cell 5 and mouse models 6 used so far for that purpose. Indeed, even though promising preclinical data is often obtained, these rarely translate to significant clinical benefit.

The method described in this work, presents a relatively simple, yet effective and novel adaptation to existing protocols 7, 8 for the culture and stimulation of human intestinal mucosa explants in a polarized fashion.

This model could provide an excellent complementary approach for the generation of valid pre-clinical data before taking a potential treatment of any kind to the clinics. Thus, unfortunate clinical outcomes 9 could potentially be avoided and researchers could more safely promote treatments to the clinics for the handling of acute inflammatory conditions.

The major advantages of the model are the possibility to compare polarized versus non polarized stimulation and to follow the tissue's response over a 24-hour time frame. A very important parameter is that in every experiment, the different treatments are applied on explants coming from the same patient which allows taking into account variability between patients. The fact that the explants are of a relatively large size compared to biopsies also means that a variety of analyses can be performed on the same explant, confirming results in many different ways (ELISA assays, quantitative rtPCRs, microarray analyses, immunohistochemistry and/or immunofluorescence data). Further, other types of analyses could be optimized in the future, such as purification of cell populations of interest from stimulated explants and evaluation of their phenotype by cytofluorimetric analysis.

However, there are also important limitations to be taken into account. At its present form this model is not suitable for high throughput screening of a large number of treatments, as it relies on the availability of the tissue. Cell culture models are probably more suitable for that purpose as they are easier to handle and perform a large number of stimulations on 10 whereas the model we describe would be more efficiently used as the end testing of candidate treatments before entering the clinics. Moreover, the time frame during which we have succeeded to preserve the viability of the tissue does not allow for experiments requiring long monitoring periods, such as RNA interference. Finally, the bacterial stimulation is carried out in a regular incubator and does not allow for preserving or testing the effect of anaerobic bacteria. It is our intention to work on these issues in the future.

Funding: This work was supported by grants from the 7th EU framework program (IBDase, ERC: Dendroworld) and Fondazione Cariplo to MR and support by a Marie Curie international training mobility network (Cross-Talk, grant agreement No: 21553-2) to KT.