We will demonstrate how to prepare retinal slices from the mouse eye and record light responses in retinal neurons. The entire procedure is conducted in dark-adapted conditions.

The retina is the gateway to the visual system. To understand visual signal processing mechanisms, we investigate retinal neural network functions. Retinal neurons in the network comprise of numerous subtypes. More than 10 subtypes of bipolar cells, ganglion cells, and amacrine cells have been identified by morphological studies. Multiple subtypes of retinal neurons are thought to encode distinct features of visual signaling, such as motion and color, and form multiple neural pathways. However, the functional roles of each neuron in visual signal processing are not fully understood. The patch clamp method is useful to address this fundamental question. Here, a protocol to record light-evoked synaptic responses in mouse retinal neurons using patch clamp recordings in dark-adapted conditions is provided. The mouse eyes are dark-adapted O/N, and retinal slice preparations are dissected in a dark room using infrared illumination and viewers. Infrared light does not activate mouse photoreceptors and thus preserves their light responsiveness. Patch clamp is used to record light-evoked responses in retinal neurons. A fluorescent dye is injected during recordings to characterize neuronal morphological subtypes. This procedure enables us to determine the physiological functions of each neuron in the mouse retina.

The retina is one of the unique parts of the nervous system. As an accessible part of the brain, its synaptic architecture has been well characterized. In addition, the functions of this neural network can be examined with a physiological stimulus: light. If the retinal tissue is isolated in a dark room with appropriate procedures, neurons in the tissue will respond to light. This preparation has been used to study visual signal processing and elucidate various synaptic mechanisms and neural network functions, as well as disease mechanisms.

After genetic mutation techniques were developed, the mouse retina became a more popular model for vision researchers7-9. The mammalian retina is more attractive than that of lower vertebrates because it is evolutionarily closer to the human retina, and there is an opportunity to use disease models. However, mouse retinal cells are small and fragile10, and making retinal preparations and conducting patch clamp recordings in a dark room is challenging. As technology has improved, diverse approaches have become available to study visual signaling mechanisms such as imaging studies11 and the electroretinogram (ERG)12. Nevertheless, single cell recording with the patch clamp method is still important because it is highly temporally and spatially sensitive compared to other methods. Therefore, we have continuously conducted patch clamp recordings and improved our methods to investigate visual signal processing in mouse retinal slice preparations13-15.

In this video tutorial, the protocols are presented with important tips. Good recordings can only be achieved with good preparation. Practicing animal dissection and building a sturdy patch clamp rig will enable most researchers to achieve successful recordings.

2. Preparation for the Day of Experiment

A representative slice preparation is shown in Figure 1. The slice preparation is in a straight position, showing photoreceptors to ganglion cells in a flat surface, and no detachment from the filter paper. If a slice is tilted, only part of the preparation is in focus, which makes it difficult to identify an appropriate cell for patch clamping. For recordings, it is important to select a good soma, which usually has a shiny surface, an even round shape, and no visible dark plaques. After the whole cell configuration was made, the slice was exposed to background light and then to a step-light (Figure 2). Light-evoked excitatory postsynaptic potentials (L-EPSPs) were evoked in response to a step-light (timing is shown in yellow). The peak amplitude and the decay time varied depending on the cell type and subtype. A ganglion cell generated action potentials in response to bright stimuli (Figure 2 D&E). The cell type and its morphological subtype were revealed by sulforhodamine labeling after physiological recordings (Figure 2, right). 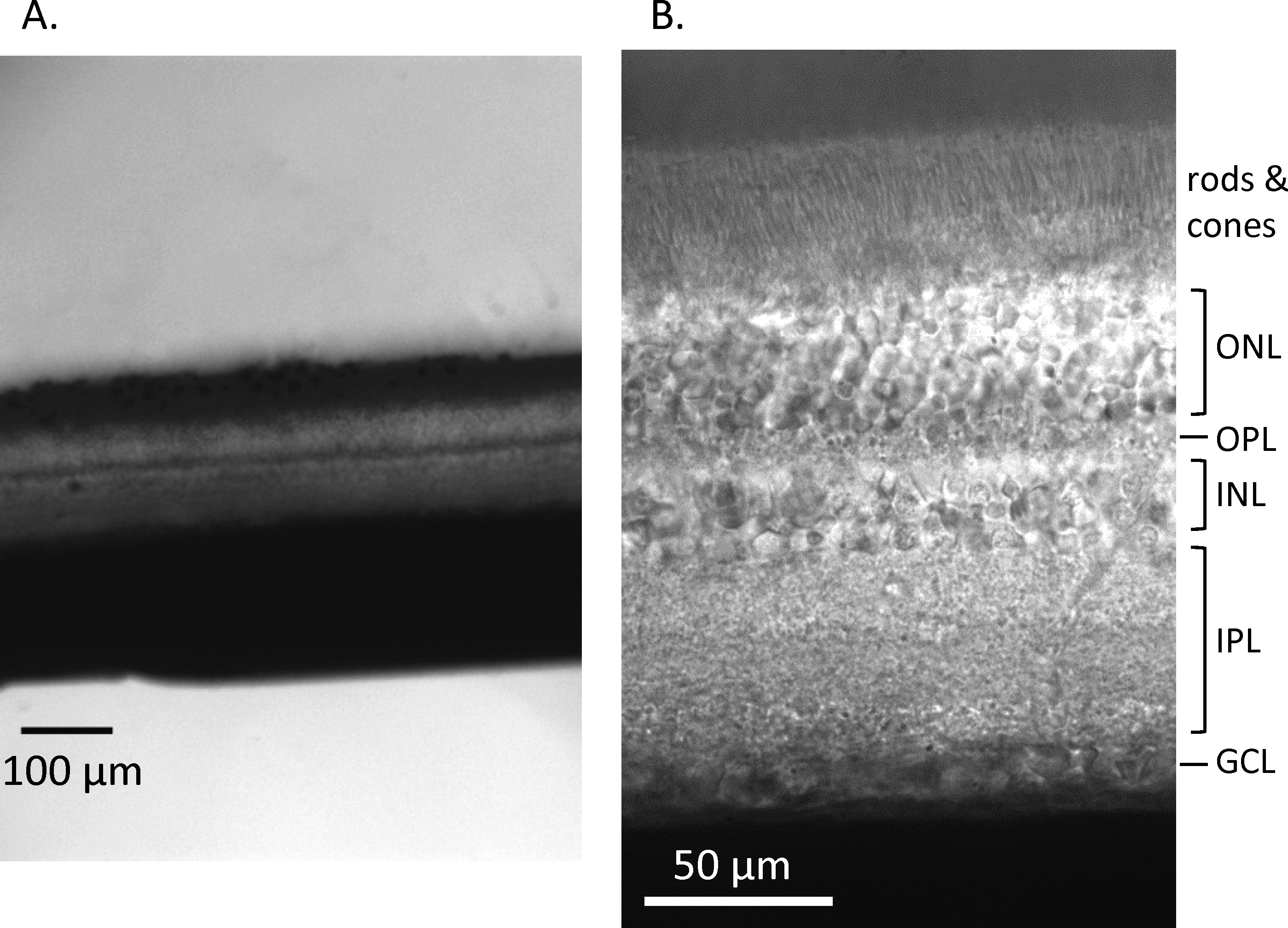 Figure 2. Light-evoked excitatory postsynaptic potentials (L-EPSPs) from retinal neurons. Step-light evoked L-EPSPs (left). The light intensity was 30 - 60% Weber contrast. Background light adaptation level was 4 x 104 photons/μm2/sec. Sulforhodamine B was injected during patch clamp recording to visualize the recorded neurons (right). A recording pipette was still attached to the soma (A) L-EPSPs and sulforhodamine staining from an ON cone bipolar cell. (B) OFF cone bipolar cell. (C) Amacrine cell. (D) ON ganglion cell. (E) OFF ganglion cell. Scale bar indicates 2 or 5 mV as noted. Light stimulation was applied for 1 sec. Please click here to view a larger version of this figure.

Good recordings can only be achieved with good retinal preparations and well-designed patch clamp setups. Although all the steps described above are important, the discussion highlights some critical steps both for the dissection and recordings.

For dissection, two things are especially important: cooling and oxygenation. After enucleating the eye, quickly remove the front part of the eye in a dissecting chamber with oxygen-bubbled, cooled dissecting solution, and pour cold solution into the eye-cup. When the retinal tissue is in the dissecting chamber, cold solution should be poured on the tissue every 10 min. The tissue should be sliced quickly without pulling or poking the retinal tissue during the dissection, which could easily damage its structure. Using good dissecting tools (sharp forceps and scissors) is also crucial. A chopper is equally as effective as a vibratome because it allows for speedy maneuvering. Extra-fine forceps should be used to remove vitreous matter as efficiently as possible because residual vitreous damages the retinal structure when slicing the tissue.

Beginners tend to damage the retina when removing the lens. The retina can detach from the eye-cup, or can even be accidentally removed with the lens. To avoid this issue, the sclera can be cut around the Ora Serrata which is located close to the extra-ocular muscle attachment point. An eye-cup with a wide opening makes it easier to remove the lens. Also, it is important not to deform the eye when removing the front portion. Another critical point is fixing the retinal slice onto a coverslip. This can be facilitated by practicing rotating the filter paper without distorting it to prevent the retinal slice from coming off during the experiment.

A sturdy, well-built rig is crucial for patch clamp recordings. It must be free of electric noise, vibration, and pipette drifting. In addition, light response can be recorded in dark conditions to prevent desensitization. Our cage is made with a metal frame and aluminum panels with black plastic drapes that act as an electric shield while also completely blocking light from entering the cage; computer monitor illumination will not affect the retinal preparation. Use a remote controller for the pipette manipulator and close the cage while setting up the patch clamp configuration, which also avoid illuminating the preparation.

Although we have been tried to simplify the procedures involved, patch clamp study is still a difficult experiment that requires extensive knowledge and training. An automated patch clamp has been developed by some groups20; this system is applicable to dissociated cells and might be an efficient technique for pharmacological screenings.