Gene silencing by siRNA represents a convenient experimental strategy to analyze BRCA2-dependent biological functions with immediate implications to better understand cancer biology. A method to efficiently silence BRCA2, along with the experimental procedure to detect and quantify changes in BRCA2 protein expression by immunoblotting in human cell lines, is presented.

Silencing of the tumor suppressor protein BRCA2 and its detection by conventional biochemical analyses represent a great technical challenge owing to the large size of the human BRCA2 protein (approximately 390 kDa). We report modifications of standard siRNA transfection and immunoblotting protocols to silence human BRCA2 and detect endogenous BRCA2 protein, respectively, in human epithelial cell lines. Key steps include a high siRNA to transfection reagent ratio and two subsequent rounds of siRNA transfection within the same experiment. Using these and other modifications to the standard protocol we consistently achieve more than 70% silencing of the human BRCA2 gene as judged by immunoblotting analysis with anti-BRCA2 antibodies. In addition, denaturation of the cell lysates at 55 °C instead of the conventional 70-100 °C and other technical optimizations of the immunoblotting procedure allow detection of intact BRCA2 protein even when very low amounts of starting material are available or when BRCA2 protein expression levels are very low. Efficient silencing of BRCA2 in human cells offers a valuable strategy to disrupt BRCA2 function in cells with intact BRCA2, including tumor cells, to examine new molecular pathways and cellular functions that may be affected by pathogenic BRCA2 mutations in tumors. Adaptation of this protocol for efficient silencing and analysis of other 'large' proteins like BRCA2 should be readily achievable.

The BRCA2 (BReast CAncer susceptibility gene-2) gene encodes for a tumor suppressor protein that plays a crucial role in repairing DNA double-strand breaks by regulating the function of the recombinase enzyme Rad51 1. BRCA2 has also been implicated in the modulation of transcription and in cell cycle control 2. Germline mutations in the BRCA2 gene induce an autosomal dominant susceptibility to breast and ovarian cancer in women and prostate cancer in men, as well as predisposition to other cancer types 3,4. However, despite the increased risk in developing cancer, BRCA2 mutations that suppress or reduce BRCA2 function may render cancer cells more vulnerable to chemotherapeutic agents that cause DNA damage 5-7. Sporadic cancers exhibit a low rate of BRCA2 mutations (< 3%) though reduced levels of BRCA2 protein have been detected in some cancer types, suggesting that BRCA2 protein may be lost during tumorigenesis in sporadic cancers through non-mutational-dependent mechanisms 7,8. Thus, it is important to fully understand BRCA2 functions in the context of cancer biology as well as in other biological settings.

A powerful tool used to identify novel functions of a gene in mammalian cells is to silence its expression. As an example, silencing BRCA2 expression in a variety of normal epithelial cells has recently led to the identification of a novel function of BRCA2 as regulator of anoikis resistance, an important step during acquisition of cancer cell invasive and metastatic ability 9. Gene silencing can be achieved by introducing in the cells either small interfering (si) RNA or short hairpin (sh) RNA molecules targeting the specific gene. The high potency of siRNA and its ease of use make it the preferential tool for silencing experiments aimed at gaining new insights into critical biological processes and to identify novel therapeutic targets. However, efficient knockdown of gene expression may not be easily achievable for all genes and may be highly variable depending on the cell type. Because a decrease in intracellular protein levels is the most relevant phenotype under investigation, it is crucial to quantify gene silencing by immunoblotting analysis of the gene product. With this respect, the BRCA2 protein presents a further challenge: being a large protein (approximately 390 kDa), technical difficulties do exist for conventional biochemical analysis, including immunoblotting.

We report here a protocol optimized for efficient silencing of BRCA2 in human epithelial cell lines and for rapid and successful detection of BRCA2 protein knockdown by immunoblotting analysis.

Before proceeding with a biological/biochemical assay to examine the effect of BRCA2 silencing on cell functions, the first step is to confirm the specificity of the silencing by using a scrambled siRNA (non-targeting siRNA) side by side with BRCA2 siRNA (Figure 1A). It is important to perform a second round of siRNA transfection with a high siRNA/transfection ratio to get a high efficiency of BRCA2 silencing. Indeed, performing only one round of siRNA transfection or using a lower siRNA to transfection ratio in the second round (25 pmol of siRNA and 6 µl of transfection reagent) would result in lower knockdown efficiency (Figure 1B). The second step is to assess the optimal minimum time to get the highest level of gene silencing. Depending on the cell type, this may vary between 24 and 48 hr after the second round of siRNA transfection. For example, 24 hr are sufficient for Nthy thyroid cells but up to 48 hr are needed for efficient BRCA2 knockdown in PNT1A prostate cells (Figure 2A). BRCA2 silencing is quite stable until day 7 after the second transfection cycle (Figure 2B). Of note, denaturing the cell lysates at a temperature above 55 °C (100 °C for 5 min), results in up to 50% loss of BRCA2 protein (Figure 2C), due to the thermosensitivity of BRCA2 11. 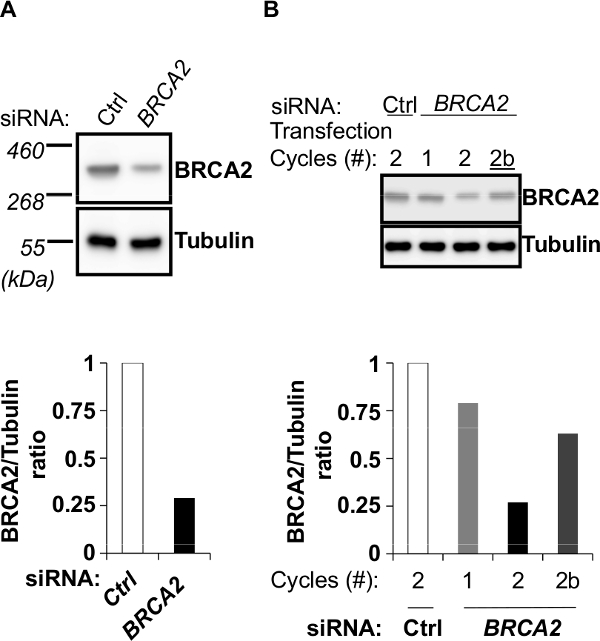 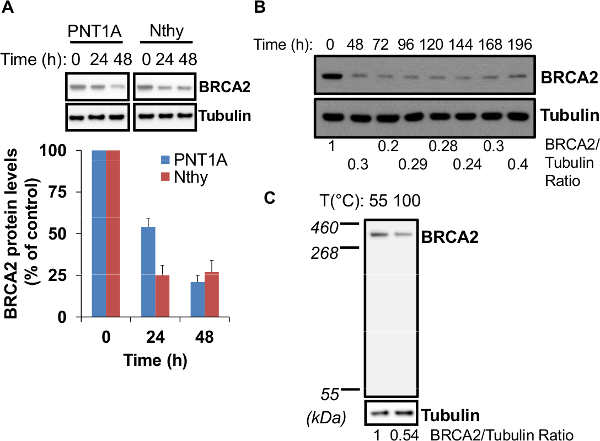 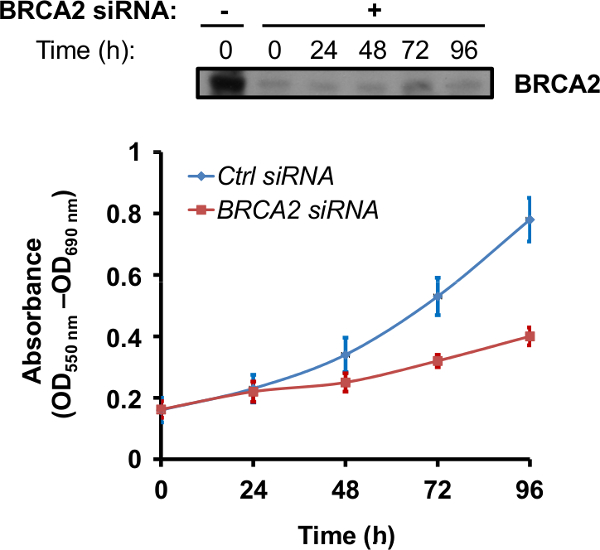 Figure 3. BRCA2 silencing increases the cell sensitivity to the PARP inhibitor rucaparib. PNT1A cells either transfected with control (Ctrl) or BRCA2 siRNA were collected 48 hr after transfection and plated in 96-well plate (2000 cells/well). After 24 hr, 10 µM rucaparib was added to the cells for 24 hr, after which the cells were kept in absence of the drug up to 96 hr. Cell proliferation was assessed at the indicated time using the MTT assay by measuring the absorbance at 550 - 690 nm. Each time point represents the mean ± S.D. of three wells from a representative experiment. Ctrl siRNA, blue line; BRCA2 siRNA, red line. At the top, BRCA2 protein profile in BRCA2 siRNA-transfected cells is reported. Please click here to view a larger version of this figure.

Because germline mutations of the BRCA2 gene lead to increased risk of several cancer types, including female and male breast cancer, ovarian cancer, prostate cancer, pancreatic cancer, and melanoma 3,4, a number of studies have been undertaken to understand the biological function of the BRCA2 protein. Most of these studies are genetic-based mainly due to technical difficulties in analyzing a giant protein like BRCA2. The method described here for silencing and analyzing BRCA2 protein expression provides an efficient tool to investigate the functions of the BRCA2 tumor suppressor gene in a broad spectrum of biological assays. The silencing protocol is based on standard siRNA transfection procedures yet contains several crucial modifications as well as tips for successful and consistent knockdown of BRCA2. The siRNA transfection protocol is safe, rapid and efficient and, differently from shRNA, which usually makes use of lentiviral vectors, does not need specific biosafety procedures and can be easily performed in any laboratory equipped with a cell culture facility. Similarly, the immunoblotting protocol has been optimized for efficient detection of a large protein like BRCA2. The immunoblotting protocol has been also validated for detection of recombinant human BRCA2 protein heterologously expressed in yeast cells 9.

Several important factors for efficient delivery of siRNA are reported here. They include two cycles of transfections and a high siRNA to transfection reagent ratio, especially in the second cycle. Absence of antibiotics prior and during the transfection procedure is another critical factor. However, this procedure exposes cells in culture to increased risk of bacterial contamination; thus extra precautions should be taken to guarantee a high standard of sterility at all steps. It should be noted that, depending on the cell type, efficient gene knockdown will typically require 24-48 hr after the second cycle. The current method has the advantage of keeping gene silencing quite stable at least until day 7 after the second transfection cycle. This allows the study of the effects of BRCA2 knockdown in a variety of biological assays, including the cellular response to different chemotherapeutic drugs. However, a limitation of the present technique is represented by the fact that exogenous siRNA molecules are not integrated in the genome, thus stable knockdown of gene expression cannot be achieved. Alternatively, to get stable knockdown, shRNA lentiviral infection may be performed, providing that the lab is prepared for additional biosafety requirements (BSL-2 standards according to the NIH guidelines). In addition, when transfection is not an applicable approach to study the gene function in a specific cell type (e.g., T lymphocytes), use of cell-specific conditional Brca2 knockout mice remains the only alternative 19.

This method reports also several tips for successful detection of a high-molecular weight protein by immunoblotting and it is appropriate for both high and low abundance proteins. In particular, due to the thermosensitivity of the BRCA2 protein, a lower denaturing temperature is critical for its optimal detection, in agreement with a previous study 11. This technical 'trick' may also be useful for other proteins for which detection by standard immunoblotting protocols has been proven unsuccessful. We anticipate that this method contains tips of general validity and thus may facilitate silencing and detection of many other challenging proteins.

This work was supported by FIRB-Merit grants RBNE08YFN3_005 and RBNE08HWLZ_012, and the Italian Ministry of Economy and Finance to the CNR for the Project “FaReBio di Qualità”.