In this protocol, we present the procedures in establishing myotonic dystrophy 1 myoblast models, including optimized C2C12 cell maintenance, gene transfection/transduction, and myocyte differentiation.

Myotonic dystrophy 1 (DM1) is a common form of muscular dystrophy. Although several animal models have been established for DM1, myoblast cell models are still important because they offer an efficient cellular alternative for studying cellular and molecular events. Though C2C12 myoblast cells have been widely used to study myogenesis, resistance to gene transfection, or viral transduction, hinders research in C2C12 cells. Here, we describe an optimized protocol that includes daily maintenance, transfection and transduction procedures to introduce genes into C2C12 myoblasts and the induction of myocyte differentiation. Collectively, these procedures enable best transfection/transduction efficiencies, as well as consistent differentiation outcomes. The protocol described in establishing DM1 myoblast cell models would benefit the study of myotonic dystrophy, as well as other muscular diseases.

Myotonic dystrophy (DM) is an autosomal dominant disease that affects multiple systems, most notably cardiac and skeletal muscles1. There are two subtypes of this disease, DM1 and DM2. DM1 is more common and has a more severe manifestation than DM22. The genetic mutation underlying DM1 is an expansion of CUG triplet repeats located in the 3' untranslated region (UTR) of DM protein kinase gene (DMPK)3. The CUG repeat number in unaffected individuals varies from 5 to 37. In contrast, it increases to more than 50, and sometimes up to thousands in DM1 patients4. As a result, RNA-binding proteins, such as muscleblind-like 1 (MBNL1), CUGBP, and Elav-like family 1 (Celf1), are misregulated. Due to the sequestration on the expanded CUG repeats, MBNL1 loses its ability to regulate alternative splicing5. Celf1, on the other hand, is up-regulated6,7. Overexpression of Celf1 is associated with muscle loss and weakness, which are not attributed to loss of MBNL1 function. Animal models simulating DM1-related alterations, including DMPK 3'-UTR CUG expansion, loss of MBNL1, and overexpression of Celf1, have been established. However, modeling DM1 in myoblasts offers an efficient alternative, especially for dissecting DM1-related cellular and molecular events.

Our lab routinely uses C2C12 myoblasts as a cell model and has developed protocols that effectively deliver genes by plasmid transfection, retroviral transduction, and lentiviral transduction into C2C12 cell line10. In the video, we demonstrate the optimized procedures for transfecting/transducing C2C12 cells and maintaining differentiation consistency in establishing DM1 myoblast models.

C2C12 cells were transfected with GFP-CUG5 or GFP-CUG200. After drug-resistance selection, stable pools were established, which can be visualized by GFP expression (Figure 1A). Myotube formation in the differentiated myoblasts was detected by myosin heavy chain immunostaining10 (Figure 1B). The quantification of myotube formation demonstrated that fusion indices were decreased from 35.4 ± 4.1% to 2.6 ± 1.1% and myotube areas were decreased from 35.6 ±  2.2% to 2.7 ± 0.8% by abnormal CUG expansion in GFP-CUG200 (Figure 1C). The fusion index and the myotube area were counted via the total number of nuclei in myotubes (≥ 2 nuclei) divided by the total number of nuclei and the percentage of the total image area covered by myotubes, respectively. Real-time RT-PCR10 was conducted to analyze expression for a number of muscle differentiation related genes including MyoD, MyoG, Mef2c and Celf1. Compared to CUG5 cultures, CUG200 increased the expression of Celf1 mRNA in proliferating myoblasts at the beginning of differentiation. Congruent with previous reports, Celf1 upregulation was associated with CUG-expansion in myogenic dystrophy 1 (Figure 1D). Further, Western blotting10 consistently showed Celf1 protein level was elevated (Figure 1E), and CUG200 inhibited the expression of MyoD, MyoG and Mef2c during differentiation (Figure 1D). These results suggest that the CUG-expansion leads to myotube defects and impaired myoblast differentiation.

To study the role of Celf1 in myoblast differentiation, pMSCV- Celf1Flag retroviral vector was constructed to transduce C2C12 cells.10 Puromycin-resistant clones were pooled for differentiation studies. Western blot results showed that the Flag-tagged Celf1 was only present in the pMSCV-Celf1Flag transduced cultures and the expression of Celf1 protein was upregulated (Figure 2A). The formation of myotubes in Celf1-overexpressing cells is rare when compared to the control cultures (Figure 2B), which suggests that the overexpression of Celf1 severely impairs myoblast differentiation.

To determine if Celf1 knockdown rescues the differentiation deficiency in CUG-expansion cells, Celf1 shRNA was delivered to GFP-CUG200 cells by lentiviral vectors. Double resistant clones (G418 and puromycin) were selected and pooled for differentiation studies. The level of endogenous Celf1 protein was markedly reduced in the presence of Celf1 shRNA (Figure 3A). After 6 days of differentiation, the effect of Celf1 shRNA on increasing myotube formation was evident (Figure 3B). Fusion indices and myotube areas were 16.1 ± 3.0% and 15.2 ± 1.2%, respectively, compared to 4.6 ± 0.8% and 5.1 ± 1.3% in control cultures (Figure 3C). Meanwhile, real-time RT-PCR results suggest that the expression of MyoD, MyoG and Mef2c was significantly increased in Celf1 shRNA cells (Figure 3D) supporting Celf1 knockdown rescued myocyte differentiation deficiency. 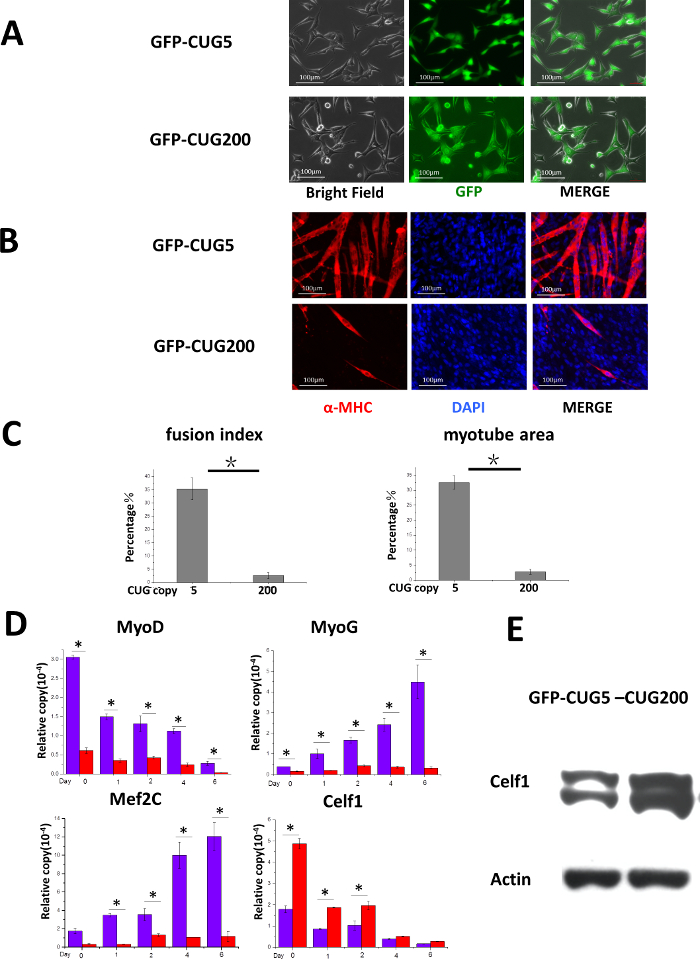 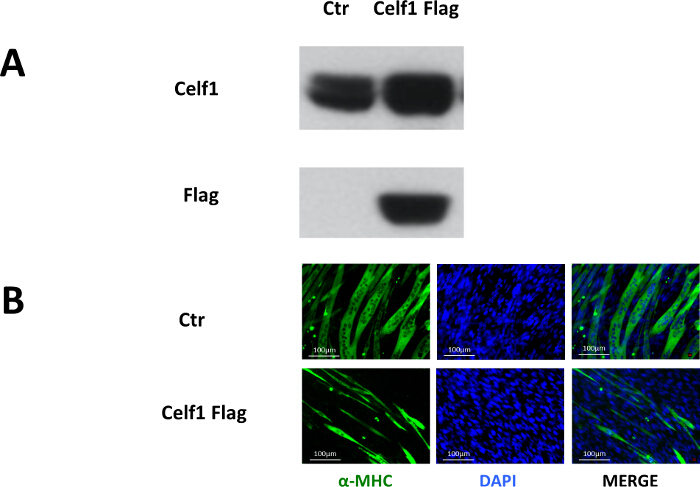 Figure 2. Overexpression of Celf1 Impairs Myoblast Differentiation. (A) Proof of exogenous Celf1Flag expression in C2C12 cells by Western blot. (B) Myotube formation was impaired in Celf1Flag-overexpressing C2C12 myoblasts. Myotubes were visualized by MF-20 immunostaining. Scale bars are 100 µm. Please click here to view a larger version of this figure. 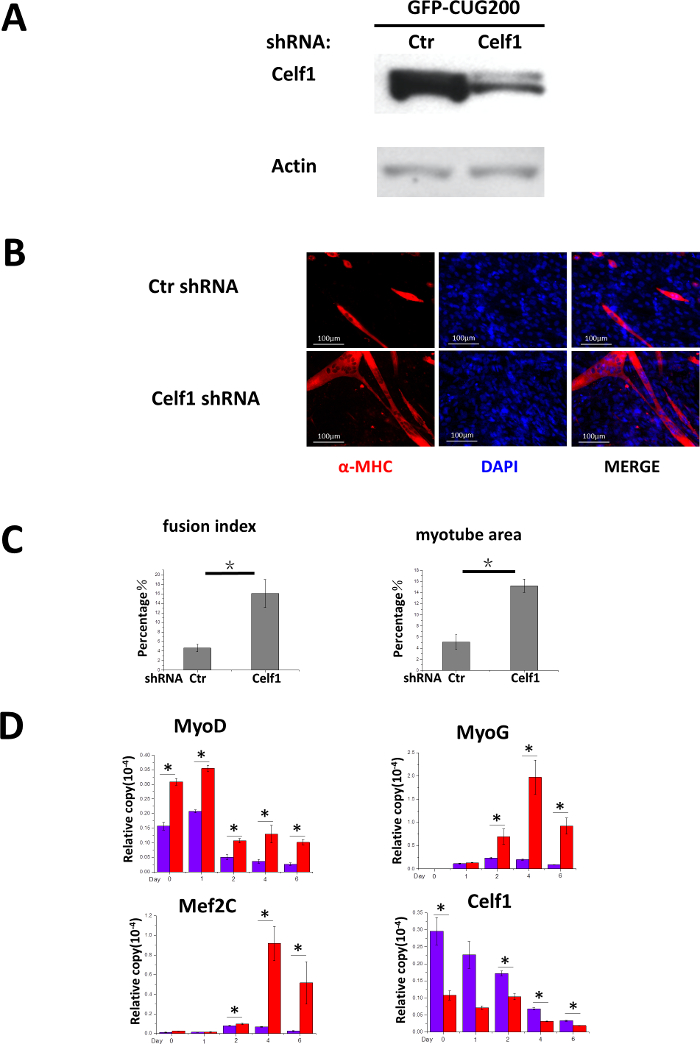 C2C12 cell line has been used as a model to study myogenesis11-14. These cells retain a fibroblast-like look, proliferate rapidly in media containing 20% fetal bovine serum and readily differentiate in media containing 2% equine serum15. The fast growth and differentiation are advantageous characteristics in a myogenesis cell model. Here, we demonstrate the use of plasmid, retroviral, and lentiviral vectors to introduce cDNA, 3'-UTR, and shRNA into C2C12 cells. The critical points for transfection/transduction and maintenance of consistency in differentiation are highlighted below.

Serum free medium enhances C2C12 cell transfection. The cells can be incubated in transfection mixture/serum free media overnight. In our lab, we achieve up to 20% transfection rate, accompanied by slight signs of cytotoxicity. The concentration of drug used to select C2C12 cell is higher, 1.2 to 1.6 mg/ml G418 or 1 to 3 µg/ml puromycin, and the duration of the selection is longer than most other cell lines. Due to potential toxicity under high drug concentration and the extended incubation period, lot-to-lot variation in differentiation potential may arise. It is crucial to adjust the selection scheme (concentration and duration) based on cell appearance and to treat the experiment and control groups together.

We have successfully introduced GFP-CUG200 into C2C12 cells that reproduce 3'-UTR CUG expansion in DM1. Introducing Celf1 into C2C12 cells and Celf1 shRNA into GFP-CUG200 C2C12 cells has allowed the evaluation of cellular and molecular events triggered by Celf1 upregulation and exploration of targeting Celf1 to help DM1 myoblast differentiation, respectively. In summary, the C2C12 myoblast model presented here benefits the investigation of myotonic dystrophy as well as general muscle cell biology and myogenic differentiation. The limitation of this model is that the findings in cell lines may not completely extend to organisms. The findings in the current models are often advanced to isolating fresh myoblasts from animals and studying their differentiation. Ultimately we substantiate myoblast findings in organisms.

The unique strength of this study is the multi-tier gene manipulation in C2C12 myoblasts, which enables modeling the sequential genetic/pathological events in DM1. Previously, the RNA toxicity effect of DMPK CUG expansion was documented in myoblasts11-14, while the pathological roles of Celf1 were separately studied in mouse models16,17. Modeling these sequential genetic/pathological events is technically challenging and time consuming if performed in animal models. As demonstrated in this study, the combined use of fluorescent and drug resistant markers allows the modeling of additional molecular events in myotonic dystrophy. The models established in this study would be useful in dissecting the detailed mechanisms in DM1 pathogenesis. They would also be valuable in screening for drugs that target different steps of DM1 pathogenesis. The strategies and procedures of this study may shed light on establishing other muscular disease models in myoblasts.