Skip to content
Trial ends in Request Full Access Tell Your Colleague About Jove
JoVE Journal
Neuroscience
This is a sample clip. Sign in or start your free trial.
Neuroscience
✖
Call For Abstracts!
Neurodegenerative Disorders
SUBMIT

We present a protocol to induce and detect CMHs caused by LPS injection in Sprague-Dawley rats, which may be utilized in future research investigations on the pathogenesis of CMHs.

Cerebral microhemorrhages (CMHs) are common in aged patients and are correlated to various neuropsychiatric disorders. The etiology of CMHs is complex, and neuroinflammation is often observed as a co-occurrence. Here, we describe a sub-acute CMHs rat model induced by lipopolysaccharide (LPS) injection, as well as a method for detecting CMHs. Systemic LPS injection is relatively simple, economical, and cost-effective. One major advantage of LPS injection is its stability to induce inflammation. CMHs caused by LPS injection could be detected by gross observation, hematoxylin and eosin (HE) staining, Perl's Prussian staining, Evans blue (EB) double-labeling, and magnetic resonance imaging-susceptibility weighted imaging (MRI-SWI) technology. Finally, other methods of developing CMHs animal models, including their advantages and/or disadvantages, are also discussed in this report.

Classical cerebral microhemorrhages (CMHs) refer to tiny perivascular deposits of blood degradation products such as hemosiderin from red blood cells in the brain1. According to the Rotterdam Scan Study, CMHs could be found in nearly 17.8% of persons aged 60–69 years and 38.3% in those over 80 years2. The prevalence of CMHs in the elderly is relatively high, and a correlation between the accumulation of CMHs and cognitive and neuropsychiatric dysfunction has been established3,4. Several animal models of CMHs have recently been reported, including rodent models induced by type IV collagenase stereotaxic injection5, APP transgenic6, β-N-methylamino-L-alanine exposure7, and hypertension8, with CMHs induced by systemic inflammation as one of the most well-accepted choices. Fisher et al.9 first used LPS derived from Salmonella typhimurium to develop an acute CMHs mouse model. Subsequently, the same group reported the development of a sub-acute CMHs mouse model using the same approach2.

LPS is considered as a standardized inflammatory stimulus via intraperitoneal injection. Previous studies have confirmed that LPS injection could cause neuroinflammation as reflected by large amounts of microglia and astrocyte activation in animal models2,10. Furthermore, a positive correlation between activation of neuroinflammation activation and the number of CMHs has been established2,10. Based on these previous studies, we were prompted to develop a CMHs rat model by intraperitoneal injection of LPS.

Advances in detection technologies have resulted in an increase in the number of research investigations on CMHs. The most widely acknowledged methods of detecting CMHs include the detection of red blood cells by hematoxylin and eosin (HE) staining, ferric iron detection by Prussian Blue staining9, detection of Evans blue (EB) deposition by immunofluorescence imaging, and 7.0 Tesla magnetic resonance imaging-susceptibility weighted imaging (MRI-SWI)10. The present study aims to develop a method of screening for CMHs.

All methods described here have been approved by the Animal Care and Use Committee (ACUC) of the PLA Army General Hospital.

NOTE: This procedure is performed using a HE Staining Kit.

NOTE: This procedure is performed using a Perls Staining Kit. 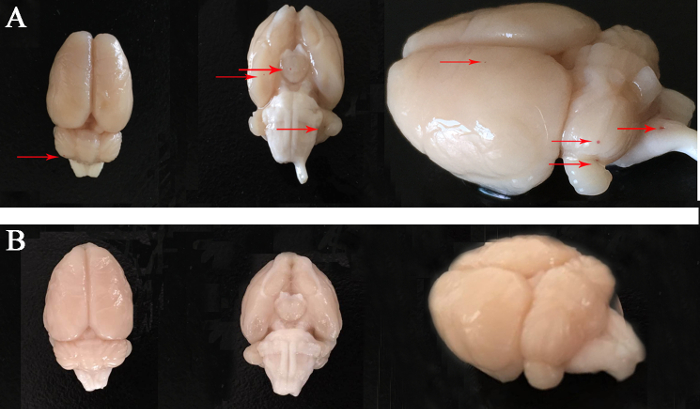 Figure 2: HE staining and Prussian staining images. (A) Reflected rat model. Red blood cells were found outside the capillaries in upper panel, and ferric iron points derived from lysis of red blood cells were detected in lower panel; (B) Reflected control animal. Neither red blood cells nor ferric iron points were found. Scale bars = 100 µm (left panel of A and B). Scale bars = 50 µm (right panel of A and B). Modified and reused with permission10. Please click here to view a larger version of this figure. 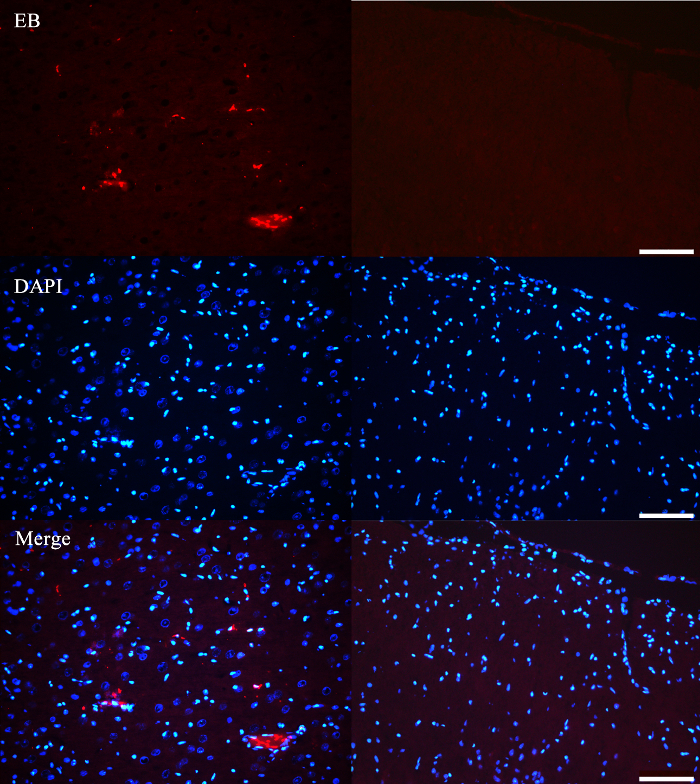 Research studies on CMHs have increased in the past few years. However, the mechanism of CMHs remains unclear, prompting scientists to establish animal models that simulate this particular condition. For example, Hoffmann et al. developed a hypoxia-induced CMHs mouse model that shows that CMHs are caused by hypoxia and disruption of cerebrovascular autoregulation12. Reuter et al.5 established a CMHs model in APP23-transgenic mice, which showed that cerebral amyloid angiopathy (CAA) plays a major role in the etiology of CMHs. Fisher et al. reported a CMHs mouse model that was induced by LPS injection9, which revealed that CMHs are caused by inflammation2,13,14. Similarly, we have successfully developed a sub-acute CMHs model in SD rats using LPS injection and have found that nitric oxide synthase (NOS), especially neural NOS and endothelial NOS, are involved in the etiology of CMHs, which result in inflammation10.

The critical step of our protocol is the LPS injection, which has been extensively used in developing murine models of neuropsychiatric disorders such as depression15, schizophrenia16, Parkinson's disease17, Alzheimer's disease18, and Prion disease19. To our knowledge, our use of a single dose (1 mg/kg) is much higher than that was applied in other studies15,16,17,18,19. This might be a plausible reason for the mortality in the current study. LPS dose modification for CMHs induction may be an interesting research topic, as different doses or injection schedule have been shown to influence the number, size, distribution, and progression of CMHs2. A previous study has shown that the administration of LPS to mice at a dose of 3 mg/kg induces acute CMHs2.

Although the development of different animal models has facilitated research investigations on CMHs, we have to admit that those animal models do not simulate the process of clinical CMHs. For example, in our rat model, as well as Fisher's mice model, CMHs were observed in the cerebellum, although most were observed in lobar regions (mainly CAA-related) and deep- or infra-tentorial locations (mainly hypertension-related)20,21. We have no explanation for this discrepancy in distribution, although both Fisher and our team attribute this observation to the vulnerability of cerebellar blood vessels to inflammation.

In most clinical cases, CMHs result from more than one etiological factor, although inflammation plays an important role in its etiology. Studies focusing on multiple factors that induce CMHs, instead of pure inflammation-induced CMHs, can thus be more helpful in simulating this condition. The LPS injection model could be used with other underlying factors to investigate the mechanism of CMHs. For example, Fisher et al. have conducted a preliminary, yet interesting step with aging mice injected with LPS, and demonstrated that aging is a key factor that could make the brain more susceptible to inflammation-induced CMHs14. In our opinion, the significance of the present model is its compatibility with other factors in animal models for aging14, trauma22, as well as chronic diseases such as hypercholesterolemia23, or transgenic models such as hypertension24 because of the simplicity, time-effectiveness, and stability of this protocol.

Patients with CMHs show cognitive declines, neuropsychiatric manifestations, and vertigo, which are associated with the distribution of CMHs. One limitation of the present protocol is that after LPS injection, we could not rule out the effects of peripheral inflammation on the behavior of the rats, although a decrease in social behavior and burrowing (intrinsic natural activity of rodent reflecting the impairment of daily activities) were observed. Further studies on ways to improve our method of generating a CMHs animal model, e.g., method of injecting LPS or schedule of observation, are warranted.

Nevertheless, this simple, cost-effective, and stable CMHs murine model induced by LPS injection may be utilized by researchers in elucidating the etiology of CMHs.

We thank Teacher Jian Feng Lei and colleagues from Capital Medical University for guidance during MRI. We also thank Jing Zeng from the Department of Neurology, the Second People's Hospital of Yichang for providing technical support.