This article describes a method by which one can mimic in vivo development of the Drosophila mushroom body in an ex vivo culture system.

We describe a method for ex vivo culturing of whole Drosophila brains. This can be used as a counterpoint to chronic genetic manipulations for investigating the cell biology and development of central brain structures by allowing acute pharmacological interventions and live imaging of cellular processes. As an example of the technique, prior work from our lab1 has shown that a previously unrecognized subcellular compartment lies between the axonal and somatodendritic compartments of axons of the Drosophila central brain. The development of this compartment, referred to as the axon initial segment (AIS)2, was shown genetically to depend on the neuron-specific cyclin-dependent kinase, Cdk5. We show here that ex vivo treatment of wild-type Drosophila larval brains with the Cdk5-specific pharmacological inhibitors roscovitine and olomoucine3 causes acute changes in actin organization, and in localization of the cell-surface protein Fasciclin 2, that mimic the changes seen in mutants that lack Cdk5 activity genetically.

A second example of the ex vivo culture technique is provided for remodeling of the connections of embryonic mushroom body (MB) gamma neurons during metamorphosis from larva to adult. The mushroom body is the center of olfactory learning and memory in the fly4, and these gamma neurons prune their axonal and dendritic branches during pupal development and then re-extend branches at a later timepoint to establish the adult innervation pattern5. Pruning of these neurons of the MB has been shown to occur via local degeneration of neurite branches6, by a mechanism that is triggered by ecdysone, a steroid hormone, acting at the ecdysone receptor B17, and that is dependent on the activity of the ubiquitin-proteasome system6. Our method of ex vivo culturing can be used to interrogate further the mechanism of developmental remodeling. We found that in the ex vivo culture setting, gamma neurons of the MB recapitulated the process of developmental pruning with a time course similar to that in vivo. It was essential, however, to wait until 1.5 hours after puparium formation before explanting the tissue in order for the cells to commit irreversibly to metamorphosis; dissection of animals at the onset of pupariation led to little or no metamorphosis in culture. Thus, with appropriate modification, the ex vivo culture approach can be applied to study dynamic as well as steady state aspects of central brain biology.

A. Preparation of Media

1. Selection and Dissection of Larval Brains

This method of ex vivo culturing can be used to pharmacologically corroborate genetic interactions previously demonstrated in our lab 1.

1. Selection of Pupae for Dissection

From this step on, the protocol remains unchanged for both larvae and pupae.

Figure 1 shows a panel of third-instar larval brains of (A) wild-type flies and (B) flies that express a dominant-negative derivative of Cdk5 (Cdk5DN) (Connell-Crowley et al., 2000). Both express actin-GFP (green) in MB gamma neurons. As described previously (Trunova et al., 2011), there is a region in the proximal axons of wild-type gamma neurons that fails to accumulate actin-GFP, thus showing up as a "clear zone" (A, bracket), and fasciclin 2 protein (red) accumulates in the axons only up to the ventral border of this zone (white horizontal line). The dotted line in the third panel of Figure 1(A) indicates the position of the MB, highlighting the actin "clear zone" and its ventral border. In flies expressing Cdk5DN, the actin clear zone is absent (B) and Fasciclin 2 (FasII) immunoreactivity spreads dorsally through that region. (Note that variable numbers of FasII-positive axons project horizontally across the MB; these are not relevant to the phenotype). Scale bar represents 20 μm.

Figure 3 shows a representative series of Drosophila mushroom bodies from 0-10 hours APF, labeled with membrane-targeted mCD8-GFP (green). Brackets indicate the calyx, that is, the dendritic projections of the MB. Prior to metamorphosis, one can see MB axons coursing dorso-ventrally in thick bundles, as well as a 'haze' of fluorescent signal arising from the dense dendritic arbor (bracket). Panel A shows brains dissected at the time indicated. Note the pruning of dendrites in the region indicated by the brackets, such that by 6-8 hrs APF, the haze of dendritic signal is gone (though the axonal signal is unaffected). Brains in panel B were dissected at 0 hours APF, before the internal ecdysone spike (Truman and Riddiford, 2002), and cultured ex vivo as indicated. These show no developmental pruning of dendrites; rather the dendritic signal persists at 10 hrs APF. To circumvent this, pupae are marked at 0 hours APF, but dissected at 1.5 hours APF and cultured. Panel C shows a representative series of these Drosophila mushroom bodies from 0-10 hours APF. As in the non-cultured samples, dendritic signal is undetectable by 8 hr APF. Scale bar represents 20 μm.

Chronic genetic manipulations of tissue structure and function, including mutations and expression of transgenes, typically produce a combination of immediate effects and late indirect consequences that can be very difficult to separate. Complementing genetic methods with pharmacology can facilitate interrogation of the time course behind a phenotype. For example, this has been a powerful approach for dissecting the contributions of different cytoskeletal components during spermatogenesis in Drosophila 10. In the current example, it has allowed us to show that there is a persistent requirement for Cdk5 to maintain the structure of the AIS in Drosophila. In other experiments we have also had success using drugs that target other cellular components, including protein kinases (imatinib), actin polymerization (cytochalasin, latrunculin and jasplakinolide) and microtubules (vinblastine and taxol).

Ex vivo culture methods also allow high-resolution analysis of the dynamics of developmental processes. Previous studies have described short-term live imaging of the central brain 11, or longer-term imaging of other portions of the nervous system, such as the thoracic ganglia 12 and retina/optic lobe connections 13. Here, while we have focused on analysis of tissue by immunostaining of fixed material, the method we describe should be applicable to long-term live imaging of the central brain. For example, proper pruning of axons and dendrites during development of the Drosophila mushroom body is essential for establishing correct connections and innervation patterns in the central nervous system. Additionally, abnormalities in neuronal organization and remodeling are thought to underlie several neurodegenerative diseases, including Alzheimer's, ALS and Parkinson's. The technique described here allows us to emulate in vivo remodeling of neurites in the Drosophila mushroom body ex vivo, in culture. We can now image changes in development in response to genetic alterations, pharmacological treatments or changes in environment. 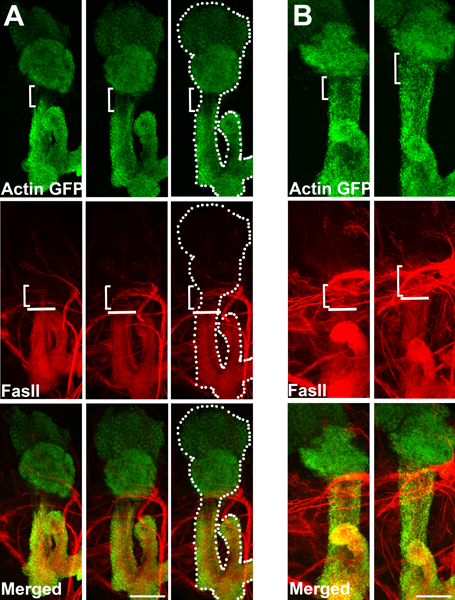 Figure 1. Over-expression of Cdk5DN causes loss of the actin 'clear zone' and a shift in the FasII border in gamma-neurons of the Drosophila mushroom body. Panel A shows three examples of wild-type brains stained for actin-GFP (green) and FasII (red) while Panel B shows two examples of brains over-expressing Cdk5DN. Note the loss of the actin 'clear zone' (bracket) and shift in the FasII ventral border (horizontal white line) in (B). The dotted line in (A) indicates the position of the mushroom body. Scale bar represents 20 μm. 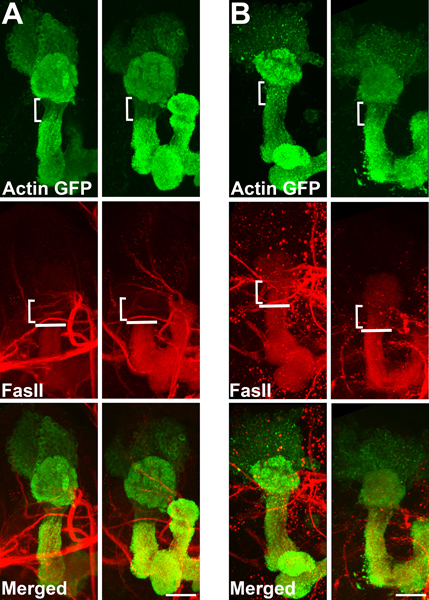 We would like to thank all the members of our lab for their advice, useful discussions and comments on the manuscript. We would also particularly like to thank Marta Koch and Bassem Hassan for the excellent suggestion that we wait until 1.5 hours APF before dissecting brains for culturing in remodeling experiments. We also thank the NHGRI imaging facility for the use of their confocal microscope. This work was supported by the Basic Neuroscience Program of the NINDS Intramural Research Program, NIH (Z01 NS003106). 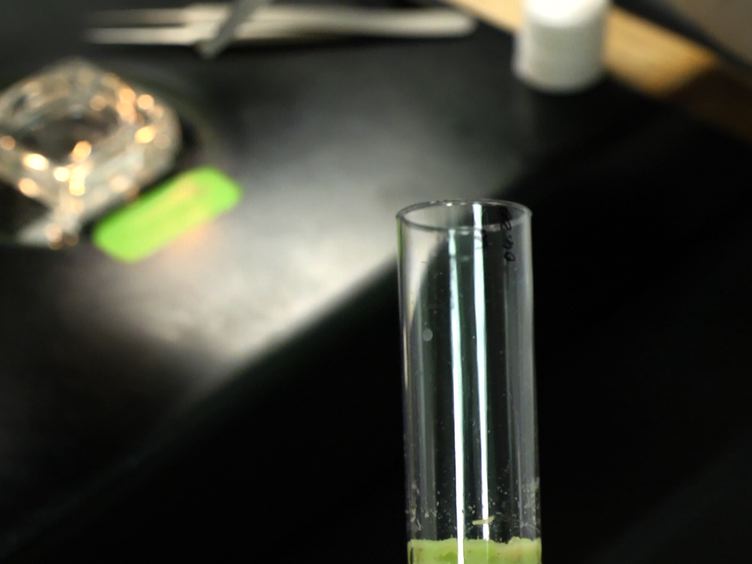