650,000 protein-protein interactions are estimated to exist in the human interactome, playing critical roles in maintaining normal cell functions 1,2. Besides co-immunoprecipitation (co-IP), the gold standard to study protein-protein interaction from cell lysate, several protein fragment complementation assays (PCA) have been developed to improve sensitivity in detecting protein-protein interaction inside cells 3. Techniques include Förster resonance energy transfer (FRET), Bioluminescence Resonance Energy Transfer (BRET), and Bimolecular Fluorescence Complementation (BiFC) 4,5. BiFC is based on the facilitated association of two fragments of a fluorescent protein (here we use Venus; a YFP variant) that are each fused to a potential interacting protein partner (in this example we use AKAP-Lbc and PDE4D3). Interaction of the two proteins of interest inside cells results in functional fluorescence, which can be visualized by fluorescence microscopy using either live or fixed cells 6,7,8. Compared to other PCAs, BiFC is sensitive and less technically challenging, with potential to study the cellular localization in live cells. A major drawback of this technique however is that once formed, the fluorescent protein complex cannot be reversed. Therefore it is not a good method to study dynamic protein-protein interaction. In this paper, we use BiFC to map the interaction sites of PDE4D3 with AKAP-Lbc by monitoring the fluorescence intensities of Venus. Compared to traditional analysis using fluorescence microscopy, which is time-consuming and labor-intensive (if not carried out using automated high throughput machinery), flow cytometry provides a straightforward quantitative analysis of thousands of cells in a heterogeneous population over a short time 9,10. Here, by carrying out a side-by-side comparison of flow cytometric-BiFC analysis and traditional co-IP, we demonstrate that the two methods provide comparable data, however, flow cytometric BiFC analysis is less time consuming and uses less material which may be more useful when cells of interest are limited.

AKAP-Lbc and PDE4D3 constructs (Figure 1B) were fused to VN and VC fragments, respectively. Interaction of AKAP-Lbc and PDE4D3 results in functional YFP fluorescence (Figure 1A). Here we use the BiFC method to map AKAP-Lbc-binding sites in PDE4D3. Upstream conserved region 1 (UCR1), upstream conserved region 2 (UCR2) and catalytic region (CAT) are conserved among PDE4 family proteins, therefore, full length (FL), UCR1 and UCR2 plus CAT were used for screening the binding site of PDE4D3 to AKAP-Lbc. The expression of VN-AKAP-Lbc and VC-PDE4D3-fragments in HEK 293T cells results in fluorescence with different intensity (Figure 1C). BiFC indicates that both UCR1 and UCR2+CAT contribute to the interaction of PDE4D3 with AKAP-Lbc. Greater fluorescence intensity resulting from AKAP-Lbc-UCR1 interaction, when compared to AKAP-Lbc-UCR2+CAT, indicates that PDE-UCR1 binds to AKAP-Lbc better than PDE-UCR2+CAT.

The heterogeneous expression of BiFC constructs and CFP in transfected cell requires analysis of a large number of cells for precise interpretation of results. However, traditional analysis by immunofluorescence microscopy is labor-intensive and subjective. This motivated us to take advantage of flow cytometry, to develop a method to rapidly analyze the protein-protein interaction in a large sample population. Initially, we carried out experiments to confirm that BiFC can be used to quantify the intensity of AKAP-Lbc and PDE4D3 interaction. HEK 293T cells were transfected with a low amount of CFP (10 ng), VN-AKAP-Lbc (200 ng), and increasing amounts of VC-PDE4D3 (2.5 ng, 5 ng, 10 ng, 20 ng, 40 ng, 80 ng). Dead cells and cell debris were excluded from analysis using FSC vs SSC double dot (Figure 2A), and cell aggregates were excluded by using SSC vs Pulse Width double dot (Figure 2B). Cells with BiFC signal or CFP expression alone were used to determine the compensation and cut-off for cells without fluorescence (Figures 2C-2F). CFP vector was co-transfected with BiFC constructs and CFP expression was used as a positive marker to indicate successful transfection. Only CFP+ cells were used for measurement of BiFC fluorescence. Transfection of increasing amounts of PDE4D3 resulted in increased Venus (YFP) BiFC signal (Figure 3A), while CFP signal remained unchanged (Figure 3B). Expression of VN-AKAP-Lbc and increasing amounts of VC-PDE4D3 was confirmed by Western blot (Figure 3C). Overall, increased PDE expression resulted in a linear increase of BiFC fluorescence correlating to PDE expression levels (Figure 3D). These results validated the use of flow cytometry to quantify AKAP-Lbc-PDE4D3 interaction by measuring the mean fluorescence intensity (MFI) of BiFC. We therefore used this methodology to map AKAP-Lbc binding sites within PDE4D3 using VN-AKAP-Lbc and VC-PDE4D3 constructs. Consistent with our observations in Figure 1C, expression of VN-AKAP-Lbc and VC-PDE4D3-UCR2+CAT resulted in lower BiFC signal when compared to VC-PDE4D3-FL and VC-PDE4D3-UCR1 (Figure 4B). Similar protein expression was observed in all flow samples (Figure 4C) and mean fluorescence was normalized to the relative expression levels of AKAP-Lbc, PDE4D3, and α-tubulin. Therefore, normalized BiFC MFI indicates that there is no difference in the fluorescence intensity between AKAP-Lbc-PDE4D3-FL and AKAP-Lbc-PDE4D3-UCR1, but much lower signal for AKAP-Lbc-PDE4D3-UCR2+CAT interaction (Figure 4A). These results suggest that there are multiple regions in PDE4D3 that interact with AKAP-Lbc, and that PDE4D3-UCR1 is the primary region of interaction with AKAP-Lbc. This result was also confirmed by co-IP, the gold standard for protein-protein interaction (Figure 5). 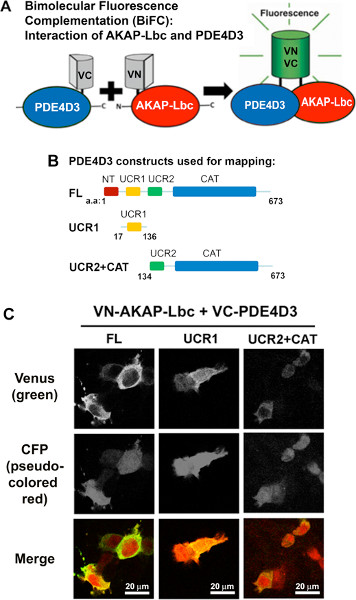 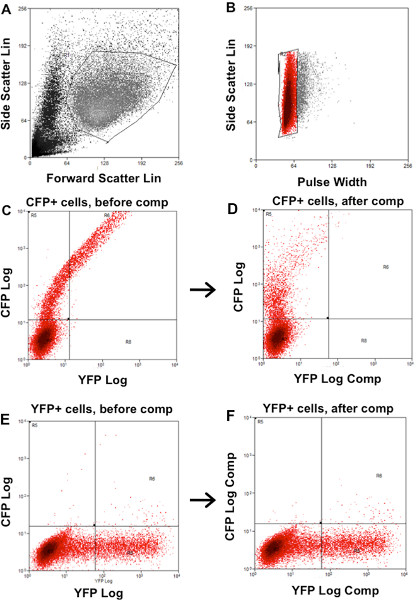 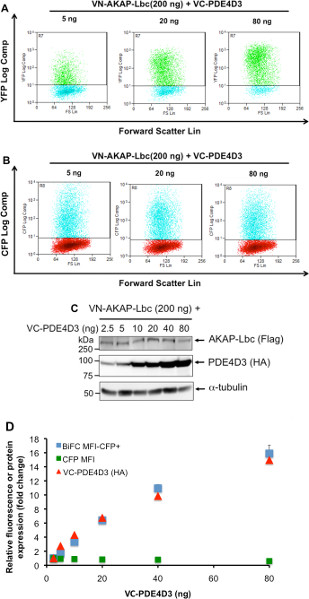 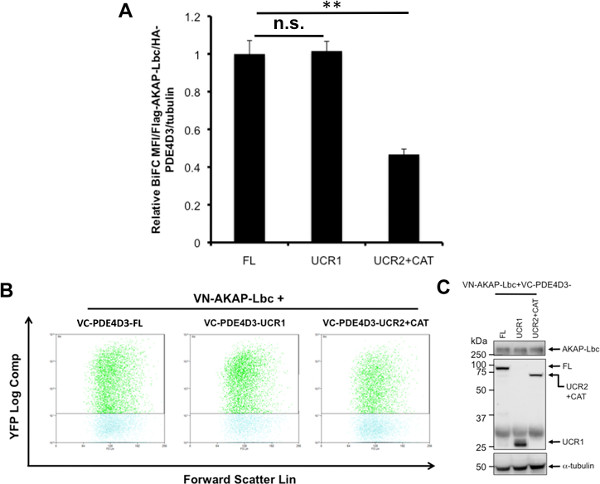 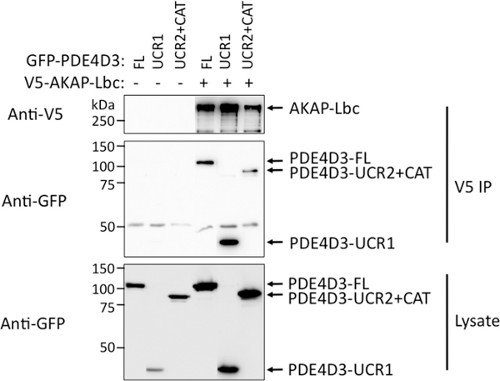 Proper controls are important for BiFC analysis. A suitable negative control includes non-interacting proteins or non-specific peptides in the relevant BiFC vector, or if possible, a mutant that disrupts protein-protein interaction. Empty BiFC vector is not a good control as it results in non-specific high background fluorescence. If BiFC is not observed in two interacting proteins, expression should be analyzed. Also, BiFC signal may vary depending on the protein-protein interaction sites. It should be noted that spatial modulation of VN and VC interaction may also affect the fluorescence intensity; therefore it is initially important to carry out BiFC experiments using both C-terminal and N-terminal VN/VC expression constructs. For example, BiFC may not occur if protein-protein interaction blocks the re-association of the Venus fragments. Therefore, multiple combinations of VN and VC constructs should be tested (i.e. both C and N terminal protein fusions).

Low amount of CFP plasmid is used as a marker for successful transfection, so only CFP positive cells were analyzed here. A different fluorescent protein, such as RFP could be used to minimize the bleed-through between colors11. For Flow Cytometry, single positive cells are needed to be included for compensation. If possible, at least 10,000 CFP positive cells are counted to ensure a good sample size.

In summary, here we demonstrate that coupling BiFC methodology with flow cytometric analysis can be used as a good indicator of protein-protein interaction inside cells. Traditional analysis of BiFC using immunofluorescence microscope is time consuming, and sample size is much lower than that corresponding to flow cytometric analysis. Thus, coupling flow cytometry with BiFC may be advantageous for analysis of protein-protein interaction when transfection efficiency is low. In this report, we took advantage of BiFC-Flow Cytometry to map the interaction sites in PDE4D3 for binding to AKAP-Lbc. This technique could also be extended to screen for molecules or peptides that may disrupt or enhance protein-protein interaction, for drug discovery 12. This method can also be used to study certain physiological events, such as ligand-induced internalization of GPCR's 13. 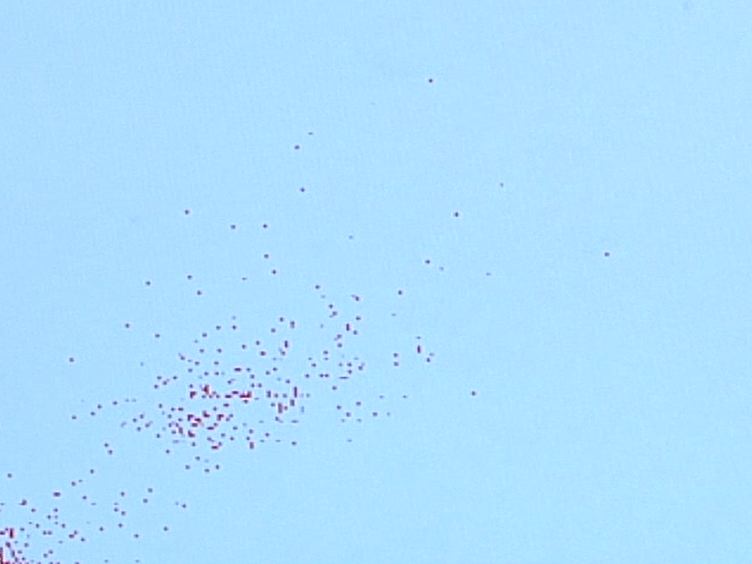