Here we demonstrate a simple protocol to create a random mutant library for a given target sequence. We show how this method, which is performed in vivo in Escherichia coli, can be coupled with functional selections to evolve new enzymatic activities.

The efficient generation of genetic diversity represents an invaluable molecular tool that can be used to label DNA synthesis, to create unique molecular signatures, or to evolve proteins in the laboratory. Here, we present a protocol that allows the generation of large (>1011) mutant libraries for a given target sequence. This method is based on replication of a ColE1 plasmid encoding the desired sequence by a low-fidelity variant of DNA polymerase I (LF-Pol I). The target plasmid is transformed into a mutator strain of E. coli and plated on solid media, yielding between 0.2 and 1 mutations/kb, depending on the location of the target gene. Higher mutation frequencies are achieved by iterating this process of mutagenesis. Compared to alternative methods of mutagenesis, our protocol stands out for its simplicity, as no cloning or PCR are involved. Thus, our method is ideal for mutational labeling of plasmids or other Pol I templates or to explore large sections of sequence space for the evolution of activities not present in the original target. The tight spatial control that PCR or randomized oligonucleotide-based methods offer can also be achieved through subsequent cloning of specific sections of the library. Here we provide protocols showing how to create a random mutant library and how to establish drug-based selections in E. coli to identify mutants exhibiting new biochemical activities.

I. Generation of a Random Mutant Library

Pol I mediates initiation of ColE1 plasmid replication (reviewed in (1-3). Our method of mutagenesis is based on placing a target sequence in a ColE1 plasmid adjacent to the origin or replication and propagating it in cells expressing low-fidelity DNA polymerase I (LF-Pol I). LF-Pol I is a mutant DNA polymerase I encoding three mutations that decrease the fidelity of replication, namely I709N (in motif A), A759R (in motif B) and D424A (inactivating proofreading) 4,5. LF-Pol I is expressed in an E. coli strain, JS200, that has a temperature-sensitive allele of Pol I (polA12) (6) so that LF-Pol I becomes the predominant activity at 37 °C. Replication of the target sequence in polA12 cells under restrictive conditions results in the generation of a random mutant library. Mutagenesis is more efficient in saturated cultures 4. For reasons that are still unclear, mutagenesis is not continuous, i.e. the mutation frequency does not increase linearly with the number of generations once the culture reaches saturation, even if cells are allowed to expand further in fresh media. Therefore, further increasing the mutation load of the library requires iterative rounds of mutagenesis and plasmid recovery. Here we provide protocols for LF-Pol I mutagenesis. Note that the protocols presented here have been considerably simplified relative to our original description 4 in order to facilitate iteration of the process for achieving the desired mutation load (Fig 1).

In order to illustrate how the vast genetic diversity present in our libraries can be coupled to a functional selection, here we provide a protocol for drug-based functional selections in vivo in E. coli. This method is based upon growth along a drug gradient on solid agar. This allows the simultaneous characterization of multiple (up to 12) samples over a range of concentrations, providing a wider dynamic range than a single drug treatment. Another advantage is that the non-linear readout of this assay buffers moderate differences in viability, within a 2-fold range. Thus, this cytotoxicity-resistance assay provides a robust and rapid means to select mutant libraries and to determine the phenotypic profile of individual mutants. Fig. 2 shows an example of each of these uses: panel A shows selection of individual mutants from a human oxidative demethylase ABH2 library. Colonies growing above the WT threshold are selected for increased protection from cytotoxicity caused by the methylating agent methyl methane sulfonate (MMS) 7. Panel B shows an example of gradients used for individual clone characterization. The level of resistance to the third-generation cephalosporin antibiotic cefotaxime is shown on an agar gradient for WT β-lactamase and for two extended-spectrum mutants, R164H and E104K R164S G267R 4. Note that depending on the strength of the observed effects, more than a single plate may be necessary for adequate quantitation: while the 0.4mg/ml gradient allows for direct comparison to the control clones, the level of resistance of the most potent mutant can only be established using a higher concentration of cefotaxime (4mg/mL).

1. Construction of the gradient 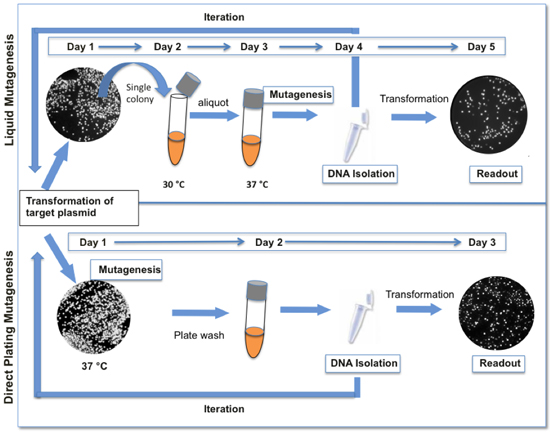 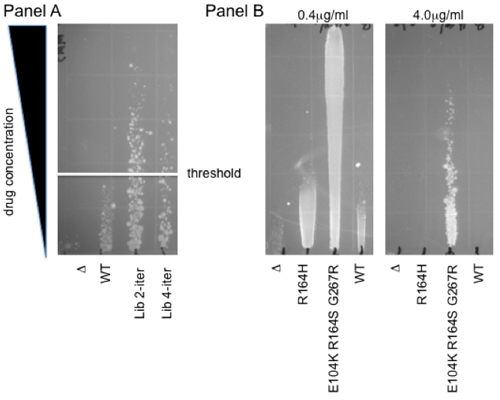 Figure 2. Gradient resistance assays. Panel A Selection for increased resistance to Methyl-Methanesulfonate (MMS). Plasmid libraries of the human oxidative demethylase ABH2 were selected for increased resistance to MMS. Two such libraries representing two and four iterations of the mutagenesis protocol are shown in comparison to the parental wild type (WT) and the empty vector (Δ). The white line denotes the threshold above which individual mutant colonies were isolated for further phenotypic analysis. Panel B Cefotaxime protection, indicative of extended-spectrum β-lactamase activity. R164H and E104K R164H G267R, two mutants of beta-lactamase previously identified following LF-Pol I mutagenesis coupled to aztreonam selection 4, are shown on a 0.4μg/mL and a 4μg/mL cefotaxime gradient. Note that the wild-type β-lactamase enzyme confers no protection relative to cells expressing an empty vector, Δ. Therefore, these mutants represent the evolution of a new biochemical activity 8,9. 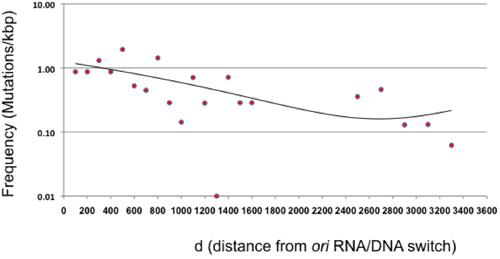 Figure 3. Mutation frequency as a function of distance from ori (d). The mutation frequency following a single cycle of direct plating mutagenesis is shown for 100 bp intervals relative to the RNA/DNA switch of the ColE1 origin of replication. The area between 1600 and 2400 is not represented because β-lactamase does not represent a neutral target. The points beyond β-lactamase represent 200 bp intervals given the overall low frequency of mutation in this area. The trend (binomial equation, with an R2=0.41) is shown as a line. 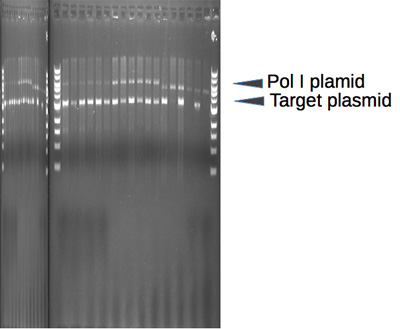 Supplementary Figure 1. LF Pol I-containing Pol I plasmid. A Sequence (FastA format). Sequence information for determining the proper restriction enzyme(s) to use when linearizing the Pol I plasmid either for iteration (generation of a random mutation library step 4) or readout (step 5). B General features and restriction map of the plasmid. The location of the pSC101 origin of replication, the chloramphenicol resistance marker (CAT) and LF-Pol I gene are presented. The location of single restriction sites is indicated as well.

Table 2. Metrics of mutation for direct plating and liquid mutagenesis. The table presents the number of observed mutations (in number) and the mutation spectrum (in %) following a single cycle of mutagenesis. The spectrum is broken down by complementary pairs, by nucleotide changes, and by the type of mutation.

This article presents a mutagenesis protocol that allows the generation of large random mutant libraries without the need for cloning or PCR. This method is based on error-prone replication of a plasmid encoding a sequence of interest. In theory, mutations should be largely restricted to the 100-300 bp located immediately downstream of the RNA/DNA switch, the size of leader strand intermediate produced by Pol I 2,10. We found that under the conditions presented in this protocol, Pol I mutations occur all over the plasmid, although diminishing in frequency as the distance from the plasmid ori increases (Figure 3). This finding implies that the transition or "switch" from Pol I to Pol III during ColE1 plasmid replication is much more gradual than previously reported, at least under our experimental conditions 2, and agrees with earlier studies suggesting a functional redundancy between Pol I and Pol III 11.

Our original protocol described mutagenesis in liquid cultures (4). This protocol yields 0.41 mutations/kb for d<1000, i.e. within the 1000 bp adjacent to the RNA/DNA switch (Table 1). Hypersaturation by leaving the liquid culture in the shaker for 3 days without the addition of any fresh media raises the mutation frequency to 0.70 mutations/kb but results in very poor plasmid yield (less than 1% compared to day 1; data not shown) (Table 1). Here we present a simplified protocol based on directly plating the transformation of the target plasmid on solid agar at 37 °C (Figure 1). This procedure produces the largest frequency of mutation/cycle of mutagenesis (0.92 mutations/kb for d<1000) and greatly facilitates iteration. Changing culture conditions to solid media also affects the mutation spectrum (Table 2). Direct plating mutagenesis reduces the marked asymmetry between complementary base pair substitutions seen in liquid culture (compare C→T vs. G→A and A→G vs. T→C). On the other hand, direct plating produced more indels (from less than 0.5% to 4%) and decreased the number of A→G mutations by 3-fold, leading to an overrepresentation of G/C mutations (74%). Overall, we believe that the greater simplicity and increased efficiency of the direct plating protocol presented here outweighs the benefits of the slightly more balanced mutation spectrum produced by liquid mutagenesis.

Within the target plasmid, the mutations generated by our method are not restricted to the desired target sequence. However, the evolution of novel biochemical activities should be dependent on mutations within the target gene, as it represents a qualitative rather than a quantitative change. Thus, combining our plasmid mutagenesis with screening of mutants on gradient plates capitalizes on the strengths of our system (large libraries and availability of selection) for the evolution of new biochemical properties. Other applications of random mutagenesis such as optimizing existing enzymatic activities or randomizing specific areas of a gene do require cloning following random mutagenesis. In this case, having the library in a plasmid as opposed to a PCR amplification product improves the efficiency of cloning by facilitating amplification and restriction.

In sum, we demonstrate a simple protocol to create a random mutant library for a given target gene that stands out for its simplicity and for the diversity of the libraries generated. We show how this method can be coupled with functional selections for the efficient evolution of new biochemical activities. In addition, our in vivo-generated libraries can be easily cloned, allowing site-specific mutagenesis or optimization of existing activities.