A technique called Comprehensive Microarray Polymer Profiling (CoMPP) for the characterisation of plant cell wall glycans is described. This method combines the specificity of monoclonal antibodies directed to defined glycan-epitopes with a miniature microarray analytical platform allowing screening of glycan occurrence in a broad range of biological contexts.

Plant cell walls are complex matrixes of heterogeneous glycans which play an important role in the physiology and development of plants and provide the raw materials for human societies (e.g. wood, paper, textile and biofuel industries)1,2. However, understanding the biosynthesis and function of these components remains challenging.

Cell wall glycans are chemically and conformationally diverse due to the complexity of their building blocks, the glycosyl residues. These form linkages at multiple positions and differ in ring structure, isomeric or anomeric configuration, and in addition, are substituted with an array of non-sugar residues. Glycan composition varies in different cell and/or tissue types or even sub-domains of a single cell wall3. Furthermore, their composition is also modified during development1, or in response to environmental cues4.

In excess of 2,000 genes have Plant cell walls are complex matrixes of heterogeneous glycans been predicted to be involved in cell wall glycan biosynthesis and modification in Arabidopsis5. However, relatively few of the biosynthetic genes have been functionally characterized 4,5. Reverse genetics approaches are difficult because the genes are often differentially expressed, often at low levels, between cell types6. Also, mutant studies are often hindered by gene redundancy or compensatory mechanisms to ensure appropriate cell wall function is maintained7. Thus novel approaches are needed to rapidly characterise the diverse range of glycan structures and to facilitate functional genomics approaches to understanding cell wall biosynthesis and modification.

Monoclonal antibodies (mAbs)8,9 have emerged as an important tool for determining glycan structure and distribution in plants. These recognise distinct epitopes present within major classes of plant cell wall glycans, including pectins, xyloglucans, xylans, mannans, glucans and arabinogalactans. Recently their use has been extended to large-scale screening experiments to determine the relative abundance of glycans in a broad range of plant and tissue types simultaneously9,10,11.

Here we present a microarray-based glycan screening method called Comprehensive Microarray Polymer Profiling (CoMPP) (Figures 1 & 2)10,11 that enables multiple samples (100 sec) to be screened using a miniaturised microarray platform with reduced reagent and sample volumes. The spot signals on the microarray can be formally quantified to give semi-quantitative data about glycan epitope occurrence. This approach is well suited to tracking glycan changes in complex biological systems12 and providing a global overview of cell wall composition particularly when prior knowledge of this is unavailable.

The relative abundance of glycans in six tissue types (anther filaments, pollen, ovaries, petals, sepals and stigma) from Nicotiana alata flowers was determined using CoMPP. Figure 3A shows a representative microarray that has been probed with mAb JIM5 specific for partially (low) methylesterified homogalacturonan (HG), an epitope which occurs on pectic polysaccharides14. The JIM5 epitope is detected in CDTA extracts of all flower tissues however is highest in pollen and lowest in stigmatic tissue (Figure 3A and 4A). Interestingly, the JIM5 epitope is also detected in the NaOH extracts in pollen but not in other tissues (Figure 3A).

The relative abundance of 15 glycan epitopes are summarised as a heatmap in Figure 4 where the intensity of color bars is proportional to the adjusted mean spot intensity for each sample. A pictorial representation of this data is also illustrated in Figure 5 and allows us to rapidly interpret differences in glycan epitope occurrence between the different flower tissues. 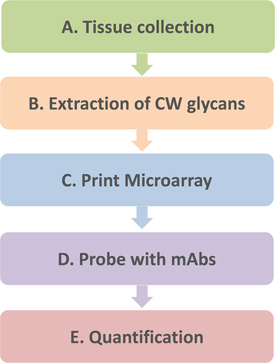 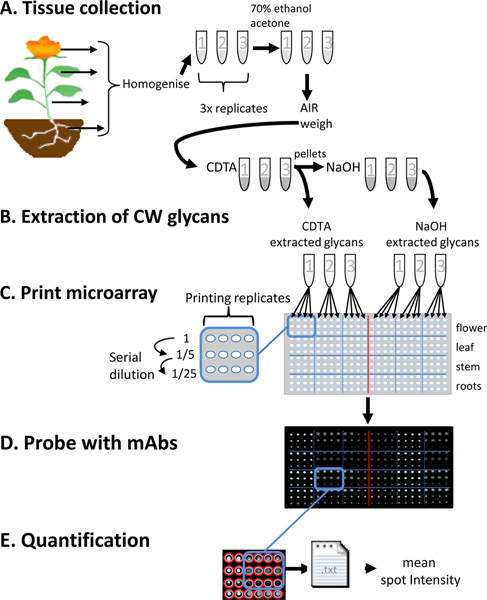 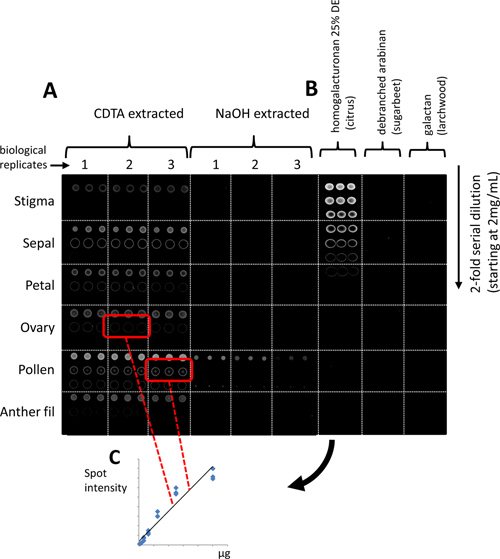 Figure 3. Glycan profiling of Nicotiana alata flower tissues. (A) A representative microarray probed with monoclonal antibody (mAb) JIM5 specific for homogalacturonan (partially, low methylesterification) is indicated as a negative, 16-bit TIFF file. (B) The amount of polysaccharide containing a glycan epitope of interest can be quantified by printing a series of polysaccharide standards. (C) Integral spot intensity of sample of interest probed by mAb JIM5 is calculated and matched to a standard curve to estimate the quantity (μg) of polysaccharide containing this epitope in the sample. 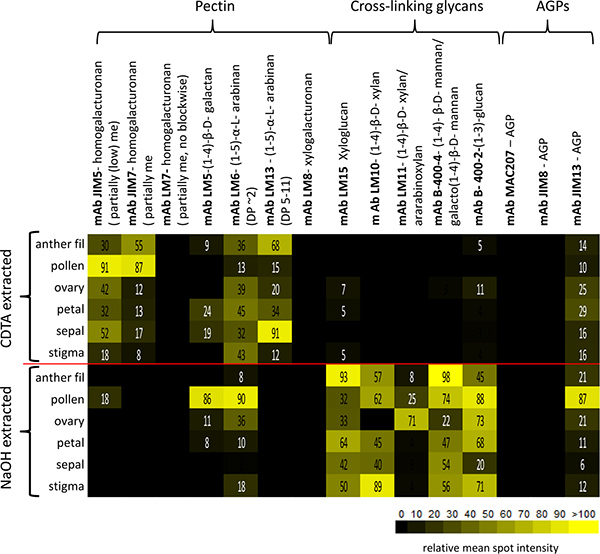 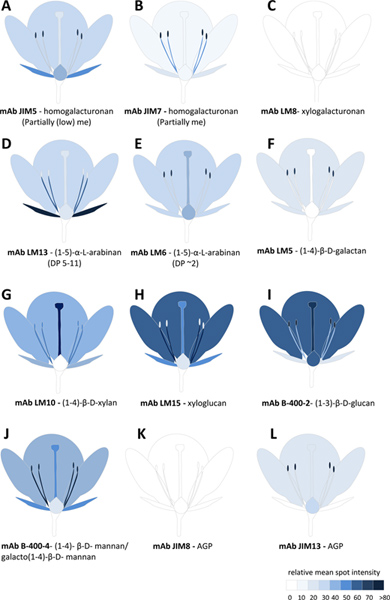 CoMPP is a fast and sensitive method for profiling the glycan composition of hundreds plant-derived samples in a matter of days. This method complements the already available bacterial or mammalian glycan array platforms for high-throughput screening of carbohydrate interactions with glycan-binding proteins such as lectins, receptors, and antibodies16. With a large diversity of probes available for detecting cell wall glycans, it is possible to gain detailed information about glycan epitopes belonging to all major classes of polysaccharides in the plant cell wall8,9. However these encompass only a small proportion of the glycan structures that have been identified8,9, and in some circumstances limit the comprehensibility of CoMPP. Nevertheless, this capability has recently been extended by the use of carbohydrate binding modules (CBMs) against plant glycans17, and also against epitopes characterized by non-glycosyl residues such as phenolics18 and acetyl residues19 which modify glycosyl residues and play an important role in glycan function.

Although CoMPP determines the relative levels of glycans across a set of samples, it is possible to quantify the epitope levels in sequential extracts by comparing the binding signal in specific samples to that of known standards (Figure 3B and C). Despite the advantages of reduced sample volumes in a microarray-based platform, the ability to accurately quantify glycan occurrence can be hindered by differences in spot morphology or saturation of spot signal. These problems (as well as false positives) are avoided by optimising the amount of cell wall material verses extractant volume, prior to analysis, and including a series of replicates and dilutions as outlined here and in mammalian glycan array methods16. Furthermore, differences in spot morphology (caused by diffusion of samples at different rates from the point of contact) can be overcome by using non-contact ink-jet microarray technology16.

CoMPP is used in combination with established procedures for the isolation and preparation of cell walls20. It can also be used in parallel with existing biochemical, enzymatic and physical methods to gain further information about glycan content in samples of interest. For instance instead of extracting cellulosic polymers, Acetic/Nitric acid assays20 can be used to quantify cellulose content (mg) remaining after sequential extraction of pectin and cross-linking glycans with CDTA and NaOH. Enzyme treatment of glycan microarrays21 can also reveal further differences in glycan epitope distribution amongst samples, or confirm the specificity of epitopes structures detected on the microarray. The determination of glycan composition by independent analytical techniques, such as those recently described13, is also particularly important for the validation of CoMPP data.

We demonstrate that glycans are distributed in an organ or tissue specific manner in N. alata flowers. This information can give insight into the biological function of glycan epitopes or glycan synthesizing or modifying enzymes present in these different cell types. CoMPP has previously provided insight into cell wall alterations that occur in relation to plant type22 during development23,24 or in response to mutation10,25. In summary, CoMPP is a valuable tool for the studying the diverse role of glycans and glycan synthesizing and modifying genes in the plant cell wall.