A rapid and simple way to generate human cell lines with inducible and reversible cDNA overexpression or shRNA-mediated knock-down of the gene of interest. This method enables researchers to reliably and highly reproducibly manipulate cell lines that are difficult to alter by transient transfection methods or conventional knockdown/knockout strategies.

A major approach in the field of mammalian cell biology is the manipulation of the expression of genes of interest in selected cell lines, with the aim to reveal one or several of the gene's function(s) using transient/stable overexpression or knockdown of the gene of interest. Unfortunately, for various cell biological investigations this approach is unsuitable when manipulations of gene expression result in cell growth/proliferation defects or unwanted cell differentiation. Therefore, researchers have adapted the Tetracycline repressor protein (TetR), taken from the E. coli tetracycline resistance operon1, to generate very efficient and tight regulatory systems to express cDNAs in mammalian cells2,3. In short, TetR has been modified to either (1) block initiation of transcription by binding to the Tet-operator (TO) in the promoter region upon addition of tetracycline (termed Tet-off system) or (2) bind to the TO in the absence of tetracycline (termed Tet-on system) (Figure 1). Given the inconvenience that the Tet-off system requires the continuous presence of tetracycline (which has a half-life of about 24 hr in tissue cell culture medium) the Tet-on system has been more extensively optimized, resulting in the development of very tight and efficient vector systems for cDNA expression as used here.

Shortly after establishment of RNA interference (RNAi) for gene knockdown in mammalian cells4, vectors expressing short-hairpin RNAs (shRNAs) were described that function very similar to siRNAs5-11. However, these shRNA-mediated knockdown approaches have the same limitation as conventional knockout strategies, since stable depletion is not feasible when gene targets are essential for cellular survival. To overcome this limitation, van de Wetering et al.12 modified the shRNA expression vector pSUPER5 by inserting a TO in the promoter region, which enabled them to generate stable cell lines with tetracycline-inducible depletion of their target genes of interest.

An example for the initial characterization of RPE-1 cell lines stably expressing TetR is shown in Figure 4. Note that all RPE-1 clones express varying levels of TetR (compare lanes 2 and 5), while the parental cell line (which serves as negative control) does not express the exogenous TetR protein (Figure 4, lane 1). This variation in TetR expression among RPE-1 Tet-on cell clones is expected, since the expression of the TetR expressing plasmids is highly dependent on the plasmid integration site.

The characterization of stable RPE-1 Tet-on cell clones expressing shRNAs directed against the MST3 kinase shows that several clones have to be tested in order to define the cell lines with the most efficient depletion of the gene of interest (Figure 5). In the illustrated case (Figure 5) cell clones #1, #2 and #3 were chosen for further analysis. The variation in depletion efficiency is expected, since the expression of shRNA expression is highly dependent on the plasmid integration site. 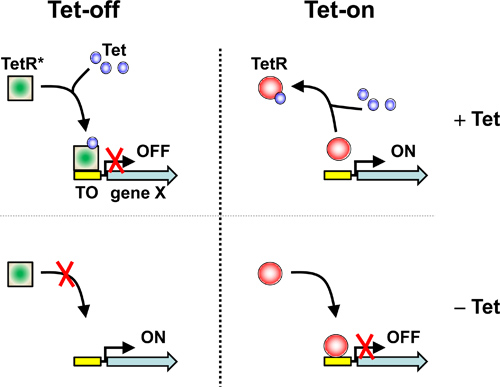 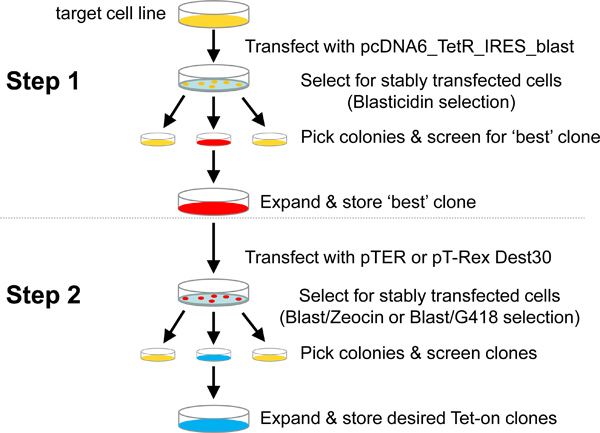 Figure 2. Description of the two consecutive manipulation steps necessary to generate human Tet-on cell lines with inducible expression of the shRNA or cDNA of interest. Step 1: Generation of cells stably expressing TetR. Target cells are transfected with the pcDNA_TetR_IRES_blast vector, and Blasticidin (Blast) resistant clones are selected. Several clones are picked and tested for TetR expression by immunoblotting. After testing for all molecular and cell biological parameters of interest (e.g. serum starvation response, cell proliferation rates, or expression of marker proteins), the 'best' TetR-positive clone is expanded and stored. Step 2: Generation of Tet-on cell lines with inducible shRNA/cDNA expression. The 'best' TetR-positive cells are transfected with pTER12 for shRNA expression or with pT-Rex DEST30 (12301-016, Invitrogen) for cDNA expression, and Blast/Zeocin or Blast/G418 resistant clones are selected, respectively. Several individual cell clones are picked, expanded and screened by immunoblotting for Tetracycline-inducible knockdown or expression of the gene of interest. Finally, clones of interest are expanded, re-tested and stored. 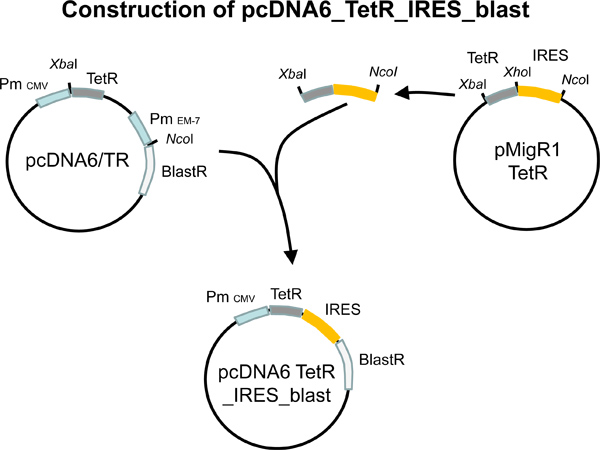 Figure 3. Generation of the pcDNA6_TetR_IRES_blast vector. The newly generated pMigR1_TetR plasmid was digested with XbaI and NcoI, and the released 1.25kb fragment containing the TetR and IRES (internal ribosome entry site) sequences was cloned into the displayed XbaI and NcoI sites of pcDNA6/TR (V1025-20, Invitrogen). The resulting pcDNA_TetR_IRES_blast vector expresses the TetR and the Blasticidin resistance gene (BlastR) using the same CMV promoter, thereby ensuring that all Blasticidin resistant cells also express TetR. 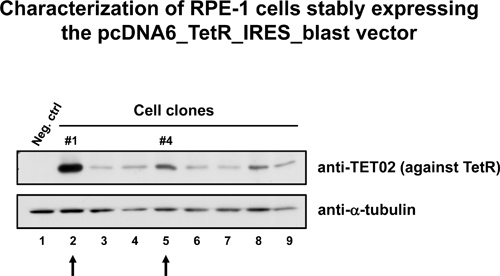 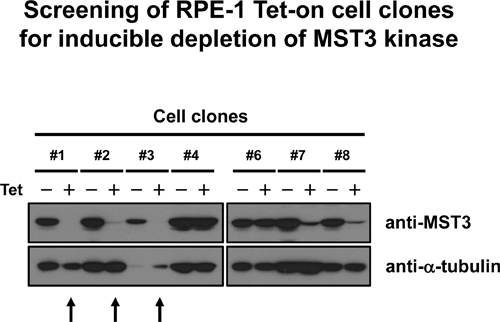 Figure 5. Analysis of RPE-1 TetR-positive clones stably transfected with pTER_shMST3. To identify cells with tetracycline-inducible expression of shRNAs targeting MST3, clones were grown in the absence (-) or presence (+) of Tetracycline (Tet) for 72 hr, before processing for immunoblotting using anti-MST3 (top panel) and anti-alpha-tubulin antibodies (bottom panel).

We believe that Tet-on systems greatly facilitate the analysis of gene function, particularly in cell systems that are difficult to manipulate and/or when the manipulated gene is essential for cell survival. Furthermore, the ability to control gene expression by highly specific Tet-on systems offers the opportunity to study gene functions at different stages (for example during cell cycle progression or well-defined differentiation processes). The method presented here will enable researchers to generate the desired stable Tet-on cell lines within a reasonable time frame (normally 3-6 months, largely depending on the extent of molecular and cell biological profiling that is necessary for the characterization of TetR-positive cell lines). The successful generation and application of Tet-on cell lines, however, is critically dependent on several factors.

First, the selection of cells with sufficiently high expression of TetR is required to ensure stringent repression of transcription in the absence of tetracycline. Equally important, the initial characterization of the target cells expressing the TetR should cover all possible molecular and cell biological parameters that will be studied on the long term. In our experience, a well-characterized TetR-positive cell line is a very good starting point for numerous research projects.

Third, tests should be applied differently for cDNA and shRNA expression. While Tet-on cells expressing cDNAs will easily produce detectable amounts of proteins within 24 hr, the depletion of endogenous factors by shRNA-mediated knockdown can take much longer. Generally, we recommend to test clones expressing shRNAs only 96 hr after tetracycline addition, which will lead to decreased levels of your gene of interest even if the half life of your target is 24 hr. The example shown in Figure 5 represents an 'ideal' screening result for shRNA-mediated depletion, and modifications to the testing protocol might be required to define the optimal knock down conditions. Last, but not least, we would like to stress the fact that well established screening tools (qRT-PCR probes, antibodies) will greatly facilitate the identification of your desired cell clones.

We thank all members of our laboratory for helpful discussions. We thank Joanna Lisztwan and Christina Gewinner for critical reading of the manuscript. This work was supported by the BBSRC grant BB/I021248/1 and the Wellcome Trust grant 090090/Z/09/Z.A.H. is a Wellcome Trust Research Career Development fellow at the UCL Cancer Institute.