MYTH allows the sensitive detection of transient and stable interactions between proteins that are expressed in the model organism Saccharomyces cerevisiae. It has been successfully applied to study exogenous and yeast integral membrane proteins in order to identify their interacting partners in a high throughput manner.

The fundamental biological and clinical importance of integral membrane proteins prompted the development of a yeast-based system for the high-throughput identification of protein-protein interactions (PPI) for full-length transmembrane proteins. To this end, our lab developed the split-ubiquitin based Membrane Yeast Two-Hybrid (MYTH) system. This technology allows for the sensitive detection of transient and stable protein interactions using Saccharomyces cerevisiae as a host organism. MYTH takes advantage of the observation that ubiquitin can be separated into two stable moieties: the C-terminal half of yeast ubiquitin (Cub) and the N-terminal half of the ubiquitin moiety (Nub). In MYTH, this principle is adapted for use as a 'sensor' of protein-protein interactions. Briefly, the integral membrane bait protein is fused to Cub which is linked to an artificial transcription factor. Prey proteins, either in individual or library format, are fused to the Nub moiety. Protein interaction between the bait and prey leads to reconstitution of the ubiquitin moieties, forming a full-length 'pseudo-ubiquitin' molecule. This molecule is in turn recognized by cytosolic deubiquitinating enzymes, resulting in cleavage of the transcription factor, and subsequent induction of reporter gene expression. The system is highly adaptable, and is particularly well-suited to high-throughput screening. It has been successfully employed to investigate interactions using integral membrane proteins from both yeast and other organisms.

Protein-protein interactions (PPIs) are the fundamental building blocks involved in governing all cellular processes. Consequently, it is essential that all interactions are tightly regulated in order to maintain cellular homeostasis, as a shift in this biological equilibrium commonly plays a role in disease and cancer cell transformation. Membrane associated proteins are amongst the most biologically important class of proteins as they can initiate complex signaling cascades, and mediate both the import and export of various molecules, including drugs, which has been of recent significance in the field of health care as problems related to drug resistance have become increasingly common. Gaining insight into the complexity of this protein class requires the identification of their interacting partners. Discovering such partners has proven challenging, as often it requires harsh conditions that must be optimized for each membrane-bound protein [1].

The fundamental biological and clinical importance of integral membrane proteins prompted the development of a yeast-based system for the high-throughput identification of PPI for full-length transmembrane proteins. To this end, we developed the split-ubiquitin based Membrane Yeast Two-Hybrid (MYTH) system [2-4]. This tool allows for the sensitive detection of transient and stable protein interactions. It has been successfully applied to study exogenous and endogenous proteins expressed in the model organism Saccharomyces cerevisiae [3-7]. MYTH takes advantage of the observation that ubiquitin may be separated into two moieties: the C-terminal half (Cub) and the N-terminal half (NubI). in vivo studies have shown that these moieties spontaneously reconstitute due to their high affinity for one-another (Figure. 1a). However, introducing an isoleucine 13 to glycine point mutation in the N-terminal half of ubiquitin (producing a fragment referred to as NubG) prevents this spontaneous re-association [8] (Figure. 1b).

We use this principle in the MYTH system (Figure. 1c and 2). Briefly, the integral membrane bait protein is fused to a Cub moiety which is linked to an artificial transcription factor consisting of the Escherichia coli DNA-binding protein LexA and the activation domain of VP16 from herpes simplex virus. Preys are generated by fusion of cDNA or genomic DNA derived fragments to the NubG moiety. An interaction between bait and prey proteins in a yeast host leads to reconstitution of a full-length 'pseudo-ubiquitin' molecule, with subsequent recognition by cytosolic deubiquitinating enzymes (DUBs) and proteolytic release of the transcription factor. The transcription factor can then enter the nucleus of the cell, and activate a reporter gene system (typically involving expression of the HIS3, lacZ and ADE2 genes) allowing the growth of yeast strains on selective media, which is indicative of bait and prey interaction [2-4].

The identification and characterization of integral membrane protein interactions will provide information to help fully understand their function. As we more precisely understand and dissect the roles of the proteins that interact with integral membrane proteins, we may gain insight into the dynamic interplay involved in regulating these proteins and discover novel targets that may have therapeutic potential.

Once MYTH screening has been completed, further analyses must be performed in order to validate and determine the biological significance of the detected interactions. The specific studies to be performed will vary on a case-by-case basis, and must be determined by the individual researcher. Some common examples of follow-up work include co-immunoprecipitation experiments and deletion studies in the native organism. Additionally, computational analysis of the obtained data can be useful for detecting patterns, and helping to identify the potential relevance and role different interactions may play. Thus, the MYTH technology serves as a powerful first-step' towards the identification and understanding of the critical functional interactions of membrane proteins. Coupled with detailed follow-up studies and other recently developed and emerging technologies, it promises to be a valuable tool in unlocking the mysteries of the cell. 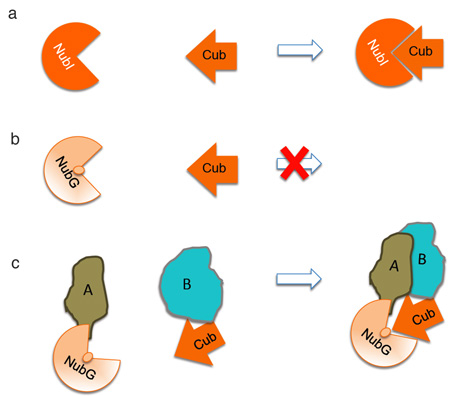 Figure 1. Principle of split ubiquitin. a. Ubiquitin may be separated into two moieties: the C-terminal half (Cub) and the N-terminal half (NubI). These moieties spontaneously reconstitute because of their high affinity for one-another. b. A NubI point mutation at position 13 from an isoleucine to glycine (NubG ) prevents this spontaneous re-association. c. In the MYTH system, the Cub is fused to the bait-of-interest (B) and the prey is fused to the NubG (A). A-B protein interaction reconstitutes pseudo-ubiquitin.

Figure 2. Split-ubiquitin based membrane yeast two-hybrid (MYTH) system.
The membrane protein-of-interest (bait) is fused to the C-terminal half of yeast ubiquitin (CUb), conjugated to a transcription factor. Using a cDNA or gDNA library, each protein encoded by the library (prey) is fused to the corresponding N-terminus of the ubiquitin moiety (NUbG). If the two proteins do not interact, the transcription factor remains at the membrane interface (left panel). However, if the proteins interact, the two ubiquitin moieties join, resulting in cleavage by ubiquitin specific proteases. Cleavage releases the transcription factor, resulting in expression of reporter genes (right panel) 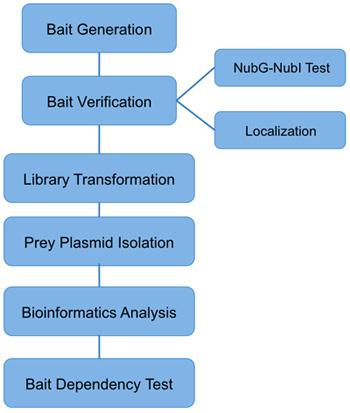 MYTH is the first high throughput system that allows the identification of interactions between full-length membrane proteins and cytosolic or membrane-bound partners. It has been used to study membrane protein from a range of organisms [3-7]. There are, however, specific details that may need to be scrutinized to ensure the protein-of-interest is amenable to study with MYTH.

Many membrane-bound proteins are directed to the plasma membrane via a signal sequence that is subsequently cleaved to produce the mature protein. This sequence is organism-specific and it is possible that this native signal sequence will cause mis-localization of the protein-of-interest when expressed in yeast because the signal sequence remains unrecognized. To circumvent this issue, we engineered these specific proteins to be fused to the yeast signal sequence, derived from the Mating factor alpha (MATα). This peptide sequence (so-called MFα-ss) re-localizes the protein to the yeast plasma membrane and importantly, is cleaved by yeast signal peptidases. This peptide sequence is found in plasmids pTMBV-MFα and pAMBV-MFα.

Another important parameter that needs to be emphasized is bait expression levels. The promoter that drives expression of the bait regulates this parameter. It may be required to optimize bait expression levels using the NubG/NubI test and the amount of 3-AT necessary to eliminate overexpression artifacts, where the bait is "self-activating" (i.e. it promiscuously interacts with many non-specific prey proteins). Examining yeast proteins produces the most physiologically relevant bait concentrations when iMYTH is applied. In this case, the gene-of-interest is tagged with the Cub-TF within the gDNA. Alternatively, exogenous proteins can be expressed from pBT3-STE and pCMBV plasmids that carry the CYC1 promoter resulting in low bait expression. The plasmids pTMBV and pTLB1 harbor the TEF1 promoter while pAMBV has the ADH1 promoter, both that drive strong expression of the bait protein. If bait protein levels require further optimizing, it may be necessary to use the pTLB-1 plasmid that carries the TEF1 promoter, however, the LexA DNA binding domain is mutated at R156G to abate the affinity towards the exogenous reporter gene promoters, ultimately decreasing the probability of self-activation [5].

Another factor that plays an important role for MYTH success is the library of choice used for the screening process. This will depend on the endogenous bait expression profiles. For example, the bait may be expressed in specific tissues, and therefore it is important to use a library that is constructed from this specific tissue. This will ensure physiologically relevant interactions are detected.

The MYTH system is a simple and rapid tool that provides an abundance of information about a class of proteins that have been difficult to study. These identified interactions may aid in the elucidation of the full biological function of membrane proteins.

We would like to thank Dawn Edmonds for a critical reading of this manuscript. The Stagljar lab is supported by funds from the Canadian Foundation for Innovation (CFI), the Canadian Institute for Health Research (CIHR), the Heart and Stroke Foundation, the Canadian Cancer Society, and Novartis. 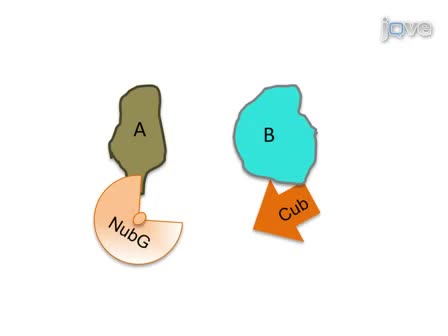