Reduction of food intake without malnutrition or starvation is known to increase lifespan and delay the onset of various age-related diseases in a wide range of species, including mammals. It also causes a decrease in body weight and fertility, as well as lower levels of plasma glucose, insulin, and IGF-1 in these animals. This treatment is often referred to as dietary restriction (DR) or caloric restriction (CR). The nematode Caenorhabditis elegans has emerged as an important model organism for studying the biology of aging. Both environmental and genetic manipulations have been used to model DR and have shown to extend lifespan in C. elegans. However, many of the reported DR studies in C. elegans were done by propagating animals in liquid media, while most of the genetic studies in the aging field were done on the standard solid agar in petri plates. Here we present a DR protocol using standard solid NGM agar-based plate with killed bacteria.

1. Establishing a calibration curve for the estimation of bacteria concentrations

This section describes a method for the estimation of bacteria concentration for any given bacteria strain (e.g. OP50, HT115) that will be used as a food source for Dietary restriction experiments in C. elegans. Separate calibration curves should be established for each bacteria strain used.

This section describes the preparation of plates for use in solid-plate based dietary restriction (sDR) experiments. Normally, we consider a bacteria concentration of 1 x 1011 cfu/mL as the ad libitum feeding condition and 1 x 108 cfu/mL as the optimal DR feeding condition for this method. However, 4-6 different bacteria concentrations may be needed to establish a complete dose-dependent relationship for sDR and its responses.

For most of the sDR-related studies, such as life span analysis and fertility profiling, preparation of an age-synchronized population of worms is essential. For other studies, simply transfer worms from a regular OP50 plate to an sDR plate to initiate the dietary restriction. In this section, a protocol to set up a lifespan analysis for sDR animals is described as an example.

Shown in Figure 1 is a plot of a representative calibration curve for the estimation of OP50 concentration in relation to OD600. The equation generated by liner regression analysis can be used for all future calculations of OP50 bacteria concentrations. Shown in Figure 2 is an example of assaying the effect of chronic sDR treatments on mean lifespan of different worm strains. The blue line represents a normal dose-dependent response of wild-type worms to sDR. The red line indicates that the lifespan effect of sDR is partially suppressed by drr-2 o.e., while daf-16(mu86) has no effect on sDR-induced lifespan extension. Detail method for performing lifespan analysis in C. elegans is described in previous literature 1-3. 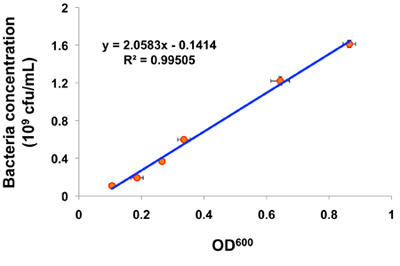 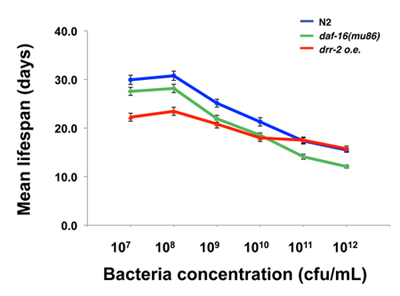 Dietary restriction (DR) is known to increase lifespan and delay the onset of various age-related diseases in a wide range of species, including mammals 5-7. Both environmental and genetic manipulations have been used to model DR in C. elegans, including culturing worms in a semi-defined liquid medium 8,9, dilution of the bacterial food source in liquid medium 10-12, and use of behavior mutants that feed at a slower rate 13. However, genetic mimics of DR may produce phenotypes that are unrelated to DR, whereas culturing worms in a liquid medium involves growth conditions that differ from the solid medium plate conditions adapted by most worm laboratories. A DR protocol performed on standard solid plates would be useful and therefore has been developed by several groups 4,14,15.

In the protocol described here, the bacteria are killed by applying two different antibiotics to the plates as a way to control the level of food intake. However, alternative methods such as UV exposure can also be used to inhibit bacteria growth.

To avoid complete deprivation of food (i.e. starvation) during the course of sDR experiments, worms need to be transferred to fresh sDR plates every 12-48 hours as mentioned above in step 3.7. The frequency of the transfer depends on the food concentration, number of worms per plate, and the amount of offspring produced by the worm strain used in the experiment. For instance, worms may be transferred every 48 hours when 20 sterile CF512 [fer-15(b26); fem-1(hc17)] animals were placed on a sDR plates containing 1 x 107 cfu/mL OP50 bacteria. The frequency of the transfer should be determined by examining, prior to the experiment, how long the sDR plates could last before the seeded bacterial is completely consumed by worms under experimental conditions. When performing experiments that last several weeks (e.g. lifespan analysis) with a non-sterile strain, 50μg/ml FUDR may be added to sDR plates prior to step 3.5 to eliminate egg laying. Otherwise, worms will have to be transferred to fresh plates much more frequently to avoid complete depletion of food due to their offspring.

While there is no set limit on the number of worms that can be placed per plate in an sDR experiment, placing more than 20 animals per plate may cause difficulty in scoring viability for a lifespan analysis following the sDR treatment. It is also worth noting that sDR can be initiated as early as day 1 of adulthood. However, initiation of sDR at early larval stages may cause developmental arrest in certain circumstances. 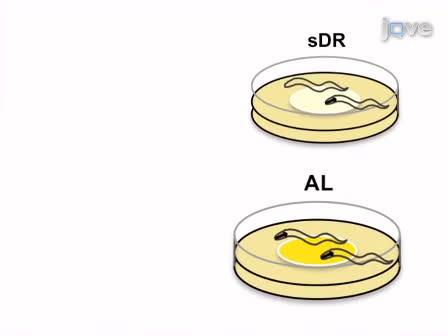