This video protocol demonstrates the neurosphere assay method to generate and expand neural stem cells from the adult mouse periventricular region, and provides technical insights to ensure one can achieve reproducible neurosphere cultures.

Isolation and expansion of the putative neural stem cells (NSCs) from the adult murine brain was first described by Reynolds and Weiss in 1992 employing a chemically defined serum-free culture system known as the neurosphere assay (NSA). In this assay, the majority of differentiated cell types die within a few days of culture but a small population of growth factor responsive precursor cells undergo active proliferation in the presence of epidermal growth factor (EGF) and/ basic fibroblastic growth factor (bFGF). These cells form colonies of undifferentiated cells called neurospheres, which in turn can be subcultured to expand the pool of neural stem cells. Moreover, the cells can be induced to differentiate, generating the three major cell types of the CNS i.e. neurons, astrocytes, and oligodendrocytes. This assay provides an invaluable tool to supply a consistent, renewable source of undifferentiated CNS precursors, which could be used for in vitro studies and also for therapeutic purposes.

This video demonstrates the NSA method to generate and expand NSCs from the adult mouse periventricular region, and provides technical insights to ensure one can achieve reproducible neurosphere cultures. The procedure includes harvesting the brain from the adult mouse, micro-dissection of the periventricular region, tissue preparation and culture in the NSA. The harvested tissue is first chemically digested using trypsin-EDTA and then mechanically dissociated in NSC medium to achieve a single cell suspension and finally plated in the NSA. After 7-10 days in culture, the resulting primary neurospheres are ready for subculture to reach the amount of cells required for future experiments.

Part 1: Basic set up before proceeding to dissection:

Part 4: Passaging and expansion of NSCs:

In primary adult NSC culture, the majority of cells will die after 2-3 days but growth factor responsive precursor (including stem and progenitor cells) cells will proliferate (Figure 1) and generate colonies of undifferentiated cells after 6-8 days. In these cultures a significant amount of debris is normally present that might acquire a spherical shape, and can be mistaken for neurospheres. The amount of debris is directly dependent on the micro-dissection and tissue preparation techniques. True neurospheres are phase bright (luminous) and become more spherical as size increases (see video). After 7-10 days, the spheres must be rounded but not compacted; and should measure between 150 and 200 μm and also should have rigid micro-spikes at the periphery at high magnification (Figure 2). If the neurospheres are allowed to grow too large, they become dark in color due to cell death at the center of the spheres. The large neurospheres are difficult to dissociate and eventually begin to attach to the substrate and differentiate. 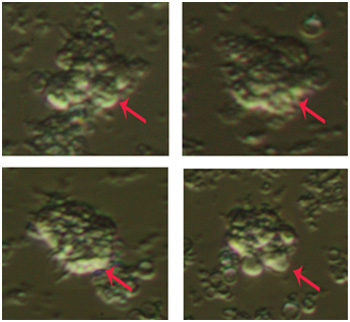 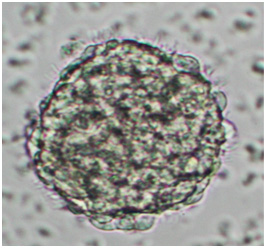 Figure 2. Passage one adult neurosphere 7 days after plating. Note the micro-spikes at the periphery of the sphere. Original Magnification; 20x.

The neurosphere assay 2 has gained broad attention in the research community not only for the isolation and study of NSCs from CNS 4-5 but also for the isolation of other types of putative stem cells from numerous tissues, such as breast 6 and heart 7 and for the identification of brain, breast and colon tumor stem cells 8-9 suggesting that this culture system can be applied to a number of somatic and tumor precursor cell populations throughout the body. Some of the advantages of this method include its simplicity, reproducibility and generation of indefinite number of cells from a small piece of tissue or even a small number of cells in a chemically defined serum free medium.

Different methods are used to dissociate neurospheres into single cell suspension including mechanical and enzymatic methods. Although mechanical method is the original neurosphere dissociation method2, it requires a lot of experience and its efficiency varies depending on the operator. This method also may cause significant cell death and damage if applied by an inexperienced individual, which can decrease the accuracy of the assays that rely on neurosphere dissociation3. Trypsin-EDTA enzymatic dissociation also has some advantages and disadvantages. Enzymatic dissociation of neurospheres is easy, efficient and reproducible if performed for the appropriate length of time and on the right sized neurospheres. Although there are no side by side studies comparing the effects of these two methods of neurosphere dissociation, our experience shows that a brief incubation (3-5 mins) of the neurospheres (up to 250 μm) with trypsin-EDTA results in an efficient dissociation without disturbing their viability, proliferation and differentiation capabilities. On the other hand, long exposure of neurospheres (especially for the large overgrown neurospheres) to trypsin-EDTA might cause serious damage to cell surface receptors, cell digestion and potentially cell death. Overexposure to trypsin-EDTA might also interfere with sphere formation and cause cells to attach to the substrate and differentiate. 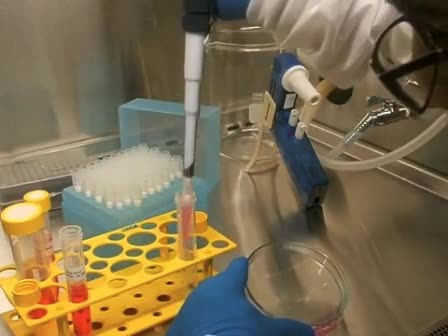