Organotypic slice culture is a powerful in vitro model that mimicks in vivo conditions more closely than dissociated primary cell cultures. In early postnatal development, cerebellar Purkinje cells are known to go through a vulnerable period, during which they undergo programmed cell death. Here, we provide a detailed protocol to perform mouse organotypic cerebellar slice culture during this critical time. The slices are further labeled to assess Purkinje cell survival and the efficacy of neuroprotective treatments. This method can be extremely valuable to screen for new neuroactive molecules.

In vitro modeling is an essential tool in biomedical research. It allows investigators to study and tightly control specific mechanisms in restricted cell types, or in isolated systems/organs. Organotypic slice culture is a widely used in vitro technique, especially in the field of neuroscience1. The method was first established by Gähwiler, who cultured brain slices using the roller tube technique2, and later modified by Yamamoto et al., who introduced the use of a microporous membrane to perform cortical slice cultures3. Compared to primary cell cultures, organotypic slice cultures present the advantage of preserving the cytoarchitecture of the tissue, as well as native cell-cell connections in the plane of the tissue section.

Organotypic slices have been cultured from many parts of the central nervous system, such as the hippocampus4, cortex5, striatum6, cerebellum4,7, and spinal cord8,9, among others. They have been proven to be a powerful tool in drug discovery studies10. The effects of neuroactive molecules can be assessed in many ways: survival and neurodegeneration using immunostaining and biochemistry assays, neuronal circuit formation, or disruption using electrophysiology and live-imaging.

The goal of this work is to describe a simple method to perform organotypic cerebellar slice culture, which is known to be a relevant model to mimic cerebellar development in vitro. Particularly, we focused on the study of Purkinje cell developmental death. In vivo, Purkinje cells undergo apoptosis during the first postnatal week, peaking at postnatal day 3 (P3)11. The same pattern is observed in cerebellar slice culture, with Purkinje neurons dying by apoptosis when cerebella are taken from animals between P1 and P8, with a peak at P34,12. The use of the organotypic cerebellar slice cultures has allowed to identify several neuroprotective molecules7,13, as well as understanding part of the mechanisms involved in this programmed cell death14,15,16. Here, we describe a protocol based upon the study of Stoppini et al.17 in hippocampus, and adapted to cerebellum by Dusart et al.4 It includes rapid dissection and chopping of postnatal cerebella; slicing culture onto a cell culture insert containing a microporous membrane, with or without neuroprotective treatment; and immunofluorescence staining to assess neuronal survival.

4. Imaging and Quantification of Cell Survival

As shown in Figure 4, this protocol produces organotypic cerebellar slice cultures in which Purkinje cell survival can be assessed following the immunofluorescence and image acquisition steps. Purkinje cells were labeled with a combination of anti-Calbindin D-28K (dilution 1/200) and Alexa594 anti-mouse (dilution 1/300) antibodies. Image stitching was done automatically by the microscope acquisition software (NIS-Elements) to obtain a picture of the whole cerebellar slice. Purkinje cell numbers per slice were entered in the Prism 8 software to generate the chart and perform statistical analysis. At P6, Purkinje cell survival was low in the control, consistent with their known vulnerability window4 (Figure 4A,E). Survival increased as the donor animal grew older and exited this critical period (Figure 4C,E). Cerebellar slices were treated with high KCl concentration to successfully induce their depolarization and survival14 (Figure 4B,D,E). 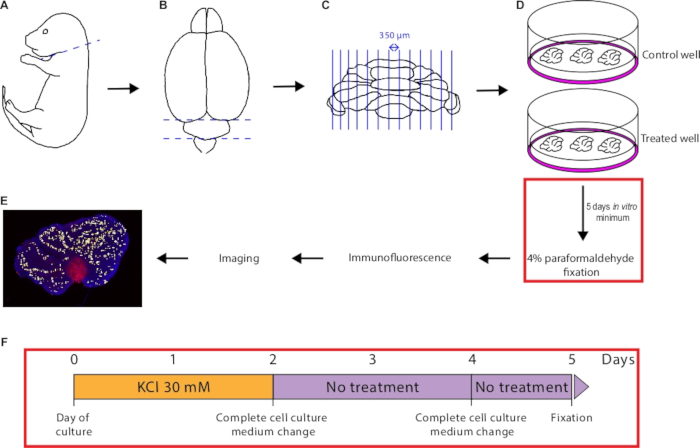 Figure 1: Illustration of the protocol from dissection to Purkinje cell survival quantification.
The mouse pup is quickly decapitated (A). Following brain dissection, the cerebellum is isolated (B), and then chopped into 350 µm-width slices (C). The cerebellar sections are placed onto a control or treated cell culture insert (D) and maintained in culture for at least 5 days in vitro. The tissue is then fixed in 4% paraformaldehyde, immunostaining is performed, and pictures are acquired with a confocal microscope. Lastly, Purkinje cell number is quantified in each slice using the Multipoint Tool in ImageJ (E). (F) Schematic of the time course of KCl treatment during culture. Please click here to view a larger version of this figure.

Figure 2: ImageJ settings used to flatten the 3D-stack prior to quantification. Please click here to view a larger version of this figure. 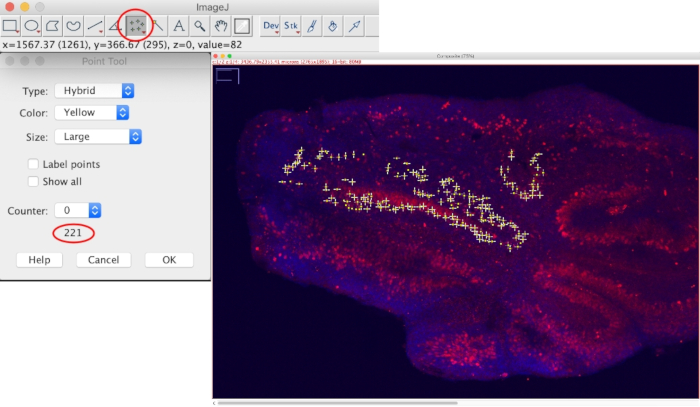 Figure 3: Settings used to count Purkinje cell number using the Multipoint tool in ImageJ with an example of a cerebellar slice being quantified. Please click here to view a larger version of this figure. 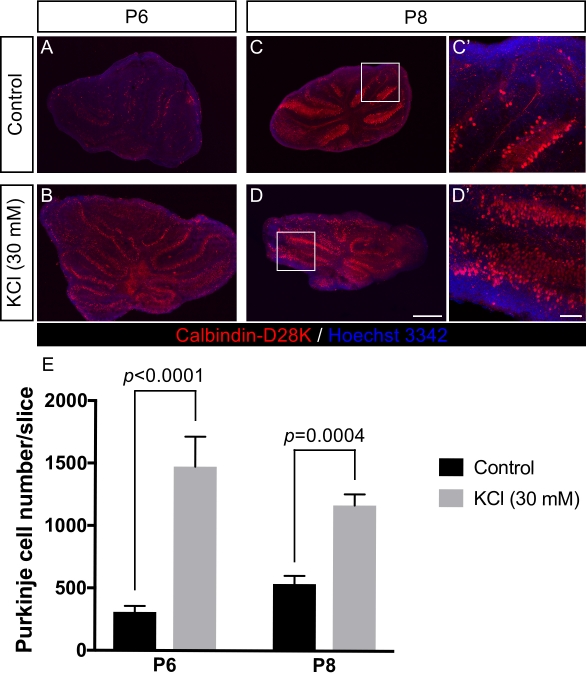 Figure 4: Purkinje cell survival in organotypic cerebellar slice culture following high KCl treatment.
Representative image of cerebellar slices taken at postnatal day 6 (A, B) or 8 (C, C', D, D'), either untreated (A, C, C') or treated with 30 mM KCl (B, D, D'). (C' and D') Higher magnification view of the white boxed regions in C and D. Slices were kept 5 days in vitro prior to fixation. Purkinje cells are labelled with Calbindin D-28K in red. Scale bar = 500 µm (A–D), and 100 µm (C' and D'). (E) Quantification of Purkinje cell survival from P6 and P8 cultures, in control or treated with 30 mM KCl, shows a higher survival with the treatment (Mann-Whitney test, n = 3 to 5 slices). Data are expressed as mean ± SEM. Please click here to view a larger version of this figure.

Cerebellar slice culture is a powerful tool to study programmed Purkinje cell death during postnatal development. This technique can be used to rapidly screen candidate molecules for their neuroprotective potential. The main advantage is that the setup is simple and very cost effective, and only requires a modest investment in equipment (a vibratome can cost up to 3 times more than a tissue chopper). Moreover, 10 to 15 healthy slices can be generated from one mouse pup, allowing for different assays to be performed in parallel using only one animal.

In order to obtain consistent and reproducible results, it is critical to perform the culture as efficiently as possible and to choose healthy cerebellar sections to be cultured. This method is also suitable for long-term culture (up to several months). So, it is essential to use good aseptic technique during the dissection and chopping process to avoid contaminations and the need to supplement cultures with antibiotics.

The cerebellar slice culture model preserves existing cell-cell interactions in the plane of the tissue section, and in the region cultured. This comes with a caveat: connections with targets outside of the cultured region might be severed. The supply in neurotrophic factors provided by afferent fibers might be discontinued as well and impair neuronal survival. This can be partially circumvented by performing organotypic slice co-cultures. It has been shown that climbing fibers can penetrate postnatal cerebellar slice cultures when co-cultured with inferior olive slice cultures14,19. More interestingly, Purkinje cells contacted by climbing fibers survived14.

Here, we focused on the use of organotypic slice culture to search for neuroprotective molecules in the developing cerebellum. However, this method is equally suitable for other conditions such as neurodegeneration20, axonal regeneration21, and monitoring of neuronal circuit activity22,23. The post-culture applications go beyond immunofluorescence. Slices can be used for biochemical or gene expression studies, in order to investigate the biological mechanisms involved in the neuroprotective effect of a given compound. Altogether, this model can lay the groundwork for finding new neuroactive molecules before in vivo testing and be an effective and reliable supplement to in vivo mechanistic studies.

Imaging work was performed at the Northwestern University Center for Advanced Microscopy generously supported by NCI CCSG P30 CA060553 awarded to the Robert H Lurie Comprehensive Cancer Center. We thank Sean McDermott for his technical assistance and support, and Maya Epstein for the hand-drawn illustrations shown in Figure 1.